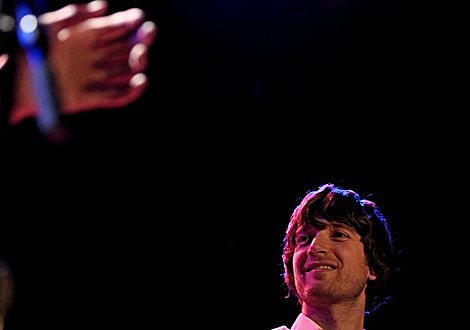 While my favorite show from last week was definitely Kings of Convenience at Bowery Ballroom, Tonight We Ride at Santos (which I headed to immediately afterward) was quite good too. I caught most of Human Life's set which was very upbeat and energetic, but the vocals reminded me of radio "club hits" a bit too much. After set-up and a brief transitional dj set in between, the Glass went on around 12:30. The duo of DJ Wool and Dominique Keegan opened their set with one of their new songs "Wanna Be Dancin' " which was a little on the quiet side. Things picked up by the next track which was "Come Alive" and only got better with each song. Superhero (which is the Glass' next single, due out next month) was amazing and really stood out. The Glass followed with some earlier tracks, "Won't Bother Me" and "Mad At You", rounding out a great set of both new and classic material. 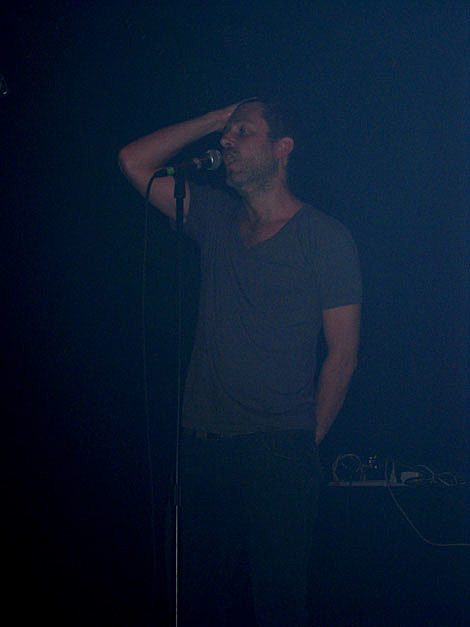 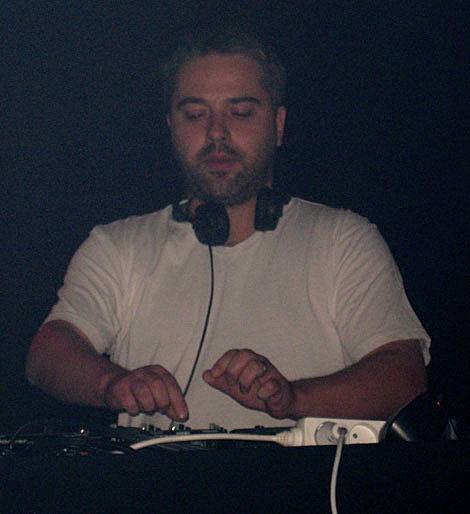 Much to my surprise, Alan Braxe went on almost immediately after, which was around 1:15. He started off with something that I didn't know, but that was super French housey. From there he played "Cross the Dancefloor" by Treasure Fingers, followed by more unidentifiable but awesome, very French touched tracks. About 45 minutes in, things started to wind down a bit but once that lull was over, Alan started heading into some older, but still great French territory yet again. He ended the set on a high note which consisted of a medley of pretty much every Alan Braxe track you wished he would play including "Music Sounds Better With You" (by Stardust - Thomas Bangalter, Alan Braxe, and Benjamin Diamond) and "Intro" (by Alan Braxe and Fred Falke) among others.

Speaking of Fred Falke, he recently remixed Burns' "First Move" which you can download at the top of this post. It's off of Burns' Teknique EP which will be out October 5th. He will be touring in support of the release along with Deadmau5 (dates below) starting next week:

Meanwhile this week there is a lot happening dance-wise. First off (because you have to get your RSVP in if you want to go!), Vice, Colt 45, and Wowch are throwing a party at Matchless on Thursday (9/17) to celebrate their collaboration & tee shirt release. Info on the line-up (and what very likely could be a Max Wowch creation) on the flyer below: 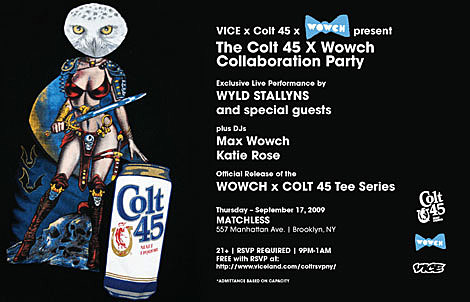 Thursday night (9/17) Fixed is throwing the first in a streak of several parties they have planned this week. They've lined up an interesting group of very different artists for the party at Highline Ballroom on Thursday. Datarock are a group of typically red tracksuit-clad Norwegians who make electronic-oriented, poppy, rock tracks. I haphazardly saw them perform twice a few years ago and while their performances are fun and energetic, they didn't really hold my interest. The band are big fans of the Talking Heads (which is sometimes evident in their sound, i.e. their track "Sex Me Up") and recently created a song, "True Stories" whose lyrics consist solely of the titles of Talking Heads' songs. It's a cool idea, but I don't really love the end result. In any case, you can download it for free here once you sign up for the Datarock email list and/or check out the video below:

Also on the bill is Norwegian electro-pop songstess Karin Park and odd Brit out, Esser (who also happens to conveniently fall under the electro-tinged pop umbrella...though I think he is the most pure, classic pop sounding, of the three). Advanced tickets for the show are available here. All dates below.

Also on Thursday (9/17):
- The Sounds are at Roseland with opening dj sets from Disko Dali and Viking. Download Disko Dali's remix of the Sounds' "No One Sleeps When I'm Awake" at the top of this post.

We have one pair of tickets to giveaway to the Sounds show. If you want them, email BVCONTESTS@HOTMAIL.COM (subject: Sounds) with your first and last name. One winner will be contacted. 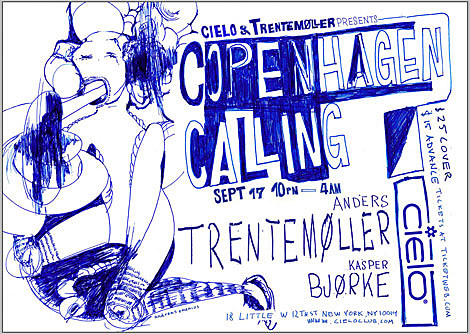 Trus'me is back again for his Disco 3000 residency at APT. This month's guest is New York's own Jacques Renault, so things should get good and disco-ey. Each of them just deejayed Trus'me's Disco 3000 Festival in Croatia which I heard was a great success. Hopefully they will be bringing some of the magic to APT's basement: 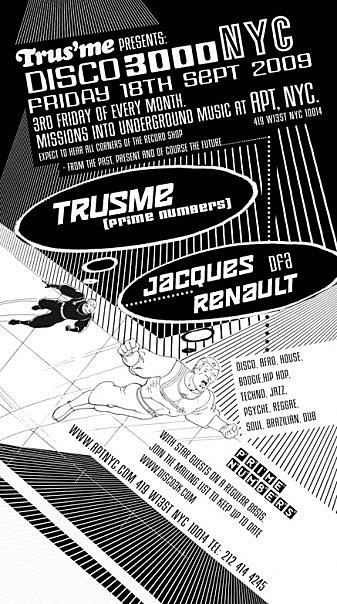 While I'm not one for dubstep, Maryanne Hobbs and DJ Pinch being here is a big deal: 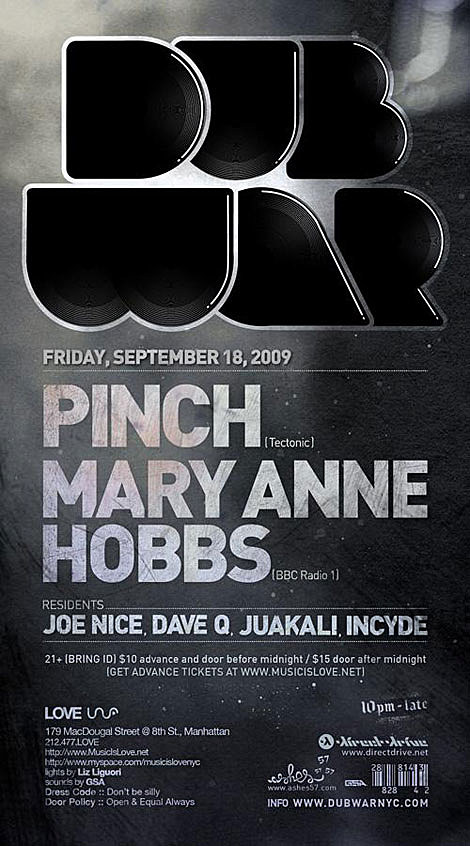 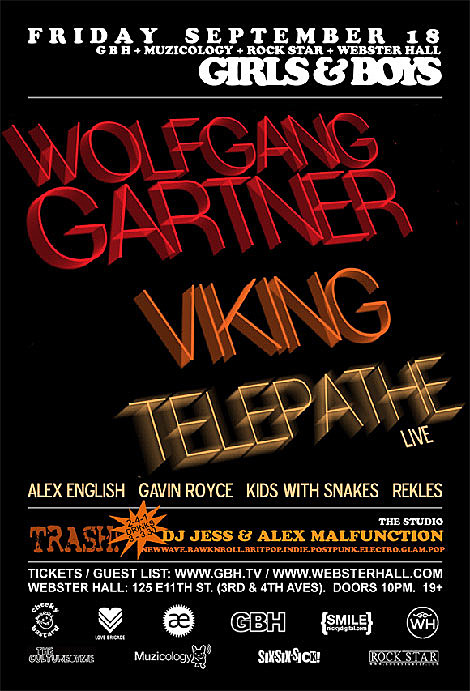 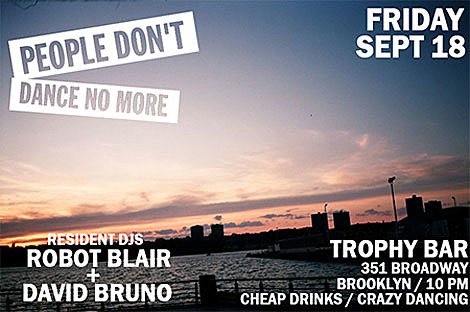 - Adult Selection with Citizen Kane and Darshan Jesrani at Cielo.
- Joey Beltram & many more at Rebel. 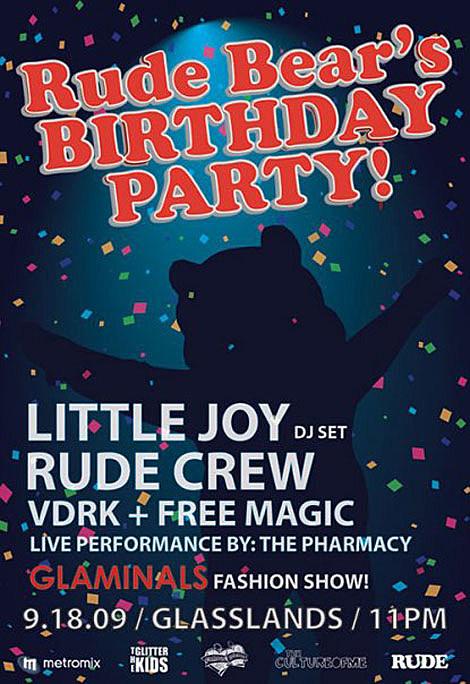 Enjoy these two nights of dancing and check back for even more coming up this weekend & next week, including more parties from Fixed, a new residency from Tortured Soul, and 2 shows from Moby! 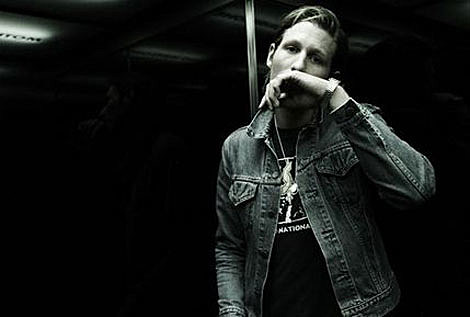