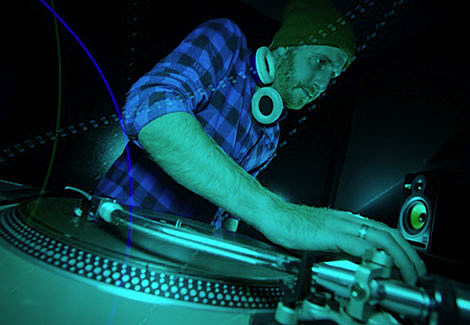 Hopefully you've had a good week in dance so far. I've yet to hit any dancefloors this week, but plan on making up for it on Saturday (9/26):

I don't think I can adequately convey just how awesome Pilooski's deejay sets are. Back in May I witnessed my first hint (just 45 minutes, after running late from another show) of his Parisian edit mastery at a dancefloor-packed Mister Saturday Night. Just a few months later in August, I experienced a great, full Pilooski set, with an unfortunately much less participatory dancefloor at Plan B.

Hopefully this Saturday will combine the best of each of those experiences at Brooklyn Bowl. Expect the lovely edits for which Pilooski is known, new stuff, old, obscure stuff, disco rarities, and French gems all mixed to perfection. I can't wait! Finger On the Pulse will be getting things started and the event is also a release party for Boys Noize's new album, Power (which you can read more about here) so you can expect to hear some new tracks from that and maybe even some give-aways. Speaking of...we have 1 pair of tickets to give away!

TO WIN A PAIR OF TICKETS TO SEE PILOOSKI AT BROOKLYN BOWL ON SATURDAY (9/26) email BVCONTESTS@HOTMAIL.COM (subject: PILOOSKI). Include your first and last name. 1 winner will be chosen at random and contacted. 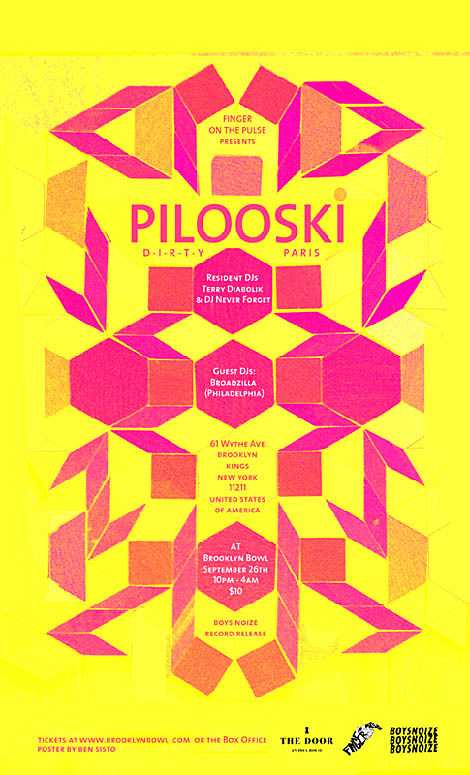 In addition to that party, there really is a lot happening Saturday in general, but if you're down for some disco there are really a lot of options:

If you've got some cash at your disposal (the tickets are pricey, but support MoMA's exhibition program and include open bar) MoMa is throwing the first party in their MoMA MiXX series,

...a dance party series that brings together a major artist with a world-class musician/DJ, each of whom will spin a set of music that has been influential in their lives and work.

The artists for the first party are Derrick Adams and Mickalene Thomas who will be deejaying as DJ Professor of Music and Dean of Admission and the actual DJ is Andy Butler (of Hercules and Love Affair). Justin Carter and Eamon Harkin are deejaying as well (though if you just want to see the two of them there is a much more affordable party on a boat later on Friday night).

You can either buy a single ticket to Saturday's MoMA MiXX party for $75 which includes open bar, or a pass to the three upcoming MoMA MiXX parties (on Saturdays 9/26/09, 1/30/10, and 4/24/10, whose line-ups have yet to be announced) with open bars for $200. Advanced tickets are available here.

If you're looking for some recession friendly disco-ing, the People Don't Dance No More crew, aka Robot Blair & David Bruno, is launching a new monthly at B.East (171 E. Broadway): 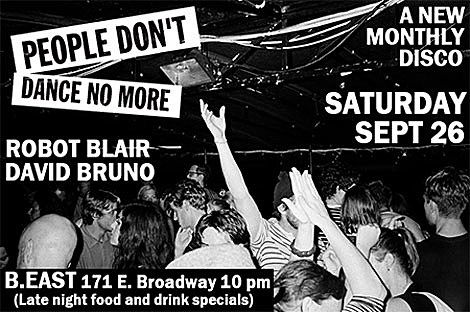 The Brooklyn-based, modern disco duo, Holy Ghost will be deejaying the Phoenix after-party at the Tribeca Grand. Party info below and check out a video of them explaining how they make tracks, their gear, etc. 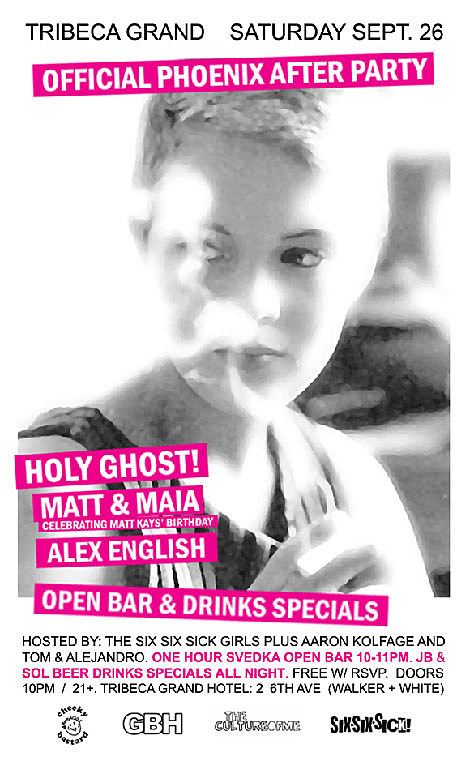 Over in Brooklyn, disco prowlers Marcos Cabral and My Cousin Roy will be deejaying at Blackout. Download Marcos' OTPMIX02 deejay mix at the top of this post. Party info below: 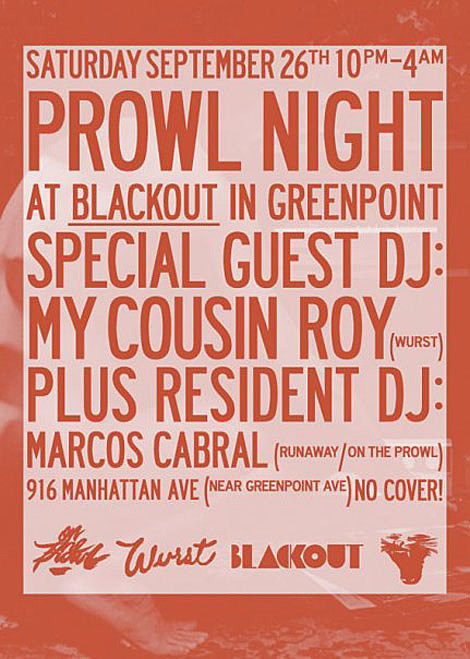 Sunday (9/27) the disco continues with a free party at Le Poisson Rouge. Italy's Bottin is the guest of honor, plus Italians Do It Better label-head Mike Simonetti will be dropping some great disco as well. Andromeda, the duo of Joan Shields and Bee Elvy, responsible for this party, will be playing

...a little bit of krautrock, space disco, cold wave and early 80s New York gems to get the night going at 10pm. 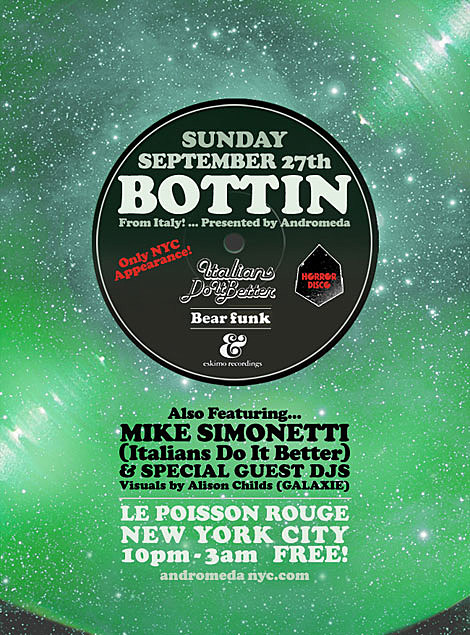 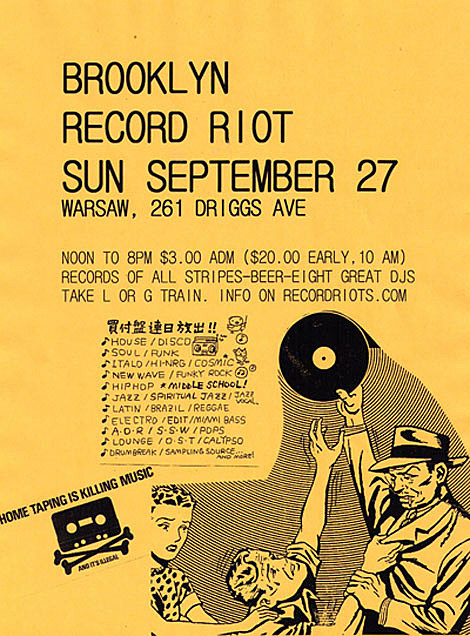 As we mourn the loss of Josh Link -- an eclectic and visionary selector -- reputed DJ's from New York and Philadelphia will gather as a tribute to the scene that Link created.

Link, better known as "Missing Link" from his drum n bass days, had been a DJ in New York for over 10 years. Back in the day, he DJ'd at underground dance parties popular amongst the techno/dnb/jungle community. Even as he moved away from illegal outdoor raves and on to a variety of corporate events and downtown hotspots -- including residencies at Greenhouse, Ella, The Box, and RDV -- Josh left an indelible impression. Remembered for his music, his kindness and his ability to bring people together, Josh will be deeply deeply missed.

All proceeds from the party will go to a charitable fund that is being setting up in Josh's name to benefit causes that meant a lot to him.

Recently I've been catching up on a lot of albums that I missed when they first came out. One, which I really wish I picked up earlier is Rules by The Whitest Boy Alive, which came out in the beginning of the year. It's a great follow up to their debut full-length Dreams (which I also recommend), and is much looser and relaxed. They really let the songs fall into nice little grooves, making for a mellow but upbeat (and sometimes even danceable) record. Check it out! Video of the Whitest Boy Alive performing "1517" (which is one of the tracks from Rules) live at ic berlin below: