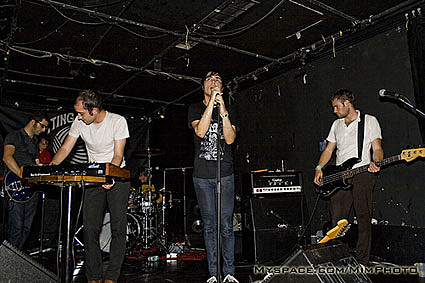 Those of you who missed Adam Kesher's NYC debut on Monday night are going to have to wait through a long, cold Adam Kesher-less winter as the band heads into the studio to complete their debut LP upon their return to France on Thursday.

La Decadanse isn't one of you:

I'll cut to the chase. Having only heard Adam Kesher's cover of Para One's "Dun-dundun", I thought it'd be a fun gig to drop by and wasn't expecting much as I admittedly don't frequent venues to see bands. Instead I was awed, absolutely starstruck, completely floored, stupified even! The songs, the actual performance and showmanship which included some heavy fancy footwork and instrument rotations... it just all coalesced into a supercharged set that left the room, which wasn't even packed to capacity, dense with energy.

Their new songs incorporate everything from hip-hop beats, to harmonized and glistening pop vocals, to shredding punk riffs, a cowbell, and of course, a dancey swagger. The boys head home to France on Thursday, but will be laying down a DJ set tonight at the Calvin Harris Afterparty at Happy Ending. Buy them a drink ask them to come back sooner.

Speaking of Calvin Harris, the UK dance sensation has been in town hustling the press circuit in anticipation of his sold out US debut at the Mercury Lounge tonight. I'm looking forward to seeing how the album translates live and I imagine the infectious grooves will have all the girls dancing like crazy. Haven't heard it yet? AOL is streaming the whole thing this week.

I finally got my hands on a copy of Underworld's new album Oblivion With Bells and I couldn't be more excited to see Rick and Karl rip Summerstage apart on Friday night. From even before I heard the first bassline, I haven't been able to shake comparisons to my first encounter with Underworld, 1993's "debut" dubnobasswithmyheadman. The minute I saw the album artwork I've associated the album to that other chaotically black and white designed disc. I don't think the comparison stops at the visual elements. The album is decidedly dark and distinctly Underworld, with pulsing rhythms and conceptually poetic lyrics, but some tracks delve into more atmospheric and funky melodic soundscapes that remind me of the album progression and urban feel of their earlier disc. Stay tuned for an interview with Karl next week: we'll get into all that. The latest tour dates are at their site.

Simian Mobile Disco bring their mobile live rave and light live show back to NYC this weekend on Saturday night at Gramercy Theater. If you missed their stellar Studio B gig, get to this one. It will be a good musical benchmark for next weekend's Chemical Brother's double header: one indoors midtown, one outdoors pool. The pool show also features Ladytron. All CB tour dates in a previous post, and don't forget SMD will be at CMJ too.

Larry Tee is gonna be busy this month. He's launching TWO new parties this weekend at Sugarland (221 N. 9th St in Williamsburg). Clever readers will note that 221 N. 9th is indeed the old Capone's and its not all going to the boys. While Fridays are the aptly named "BOYQUAKE," Saturday is the more mixed Happy Birthday Club.

Time Out also catches up with Larry as he is launching the multi-day Dance Music Invasion 2007 in just a few weeks on October 3 - 6. Ferry Corsten, Erick Morillo, and Christopher Just are the only confirmed artists. Stay tuned to the official website for more news.

Diplo and Switch are going out on tour together, they hit Studio B for Meanred's Korupt night on Saturday Sept. 29th (rescheduled from Sept 08th). Pitchfork sat down with Diplo to discuss the tour, his work with Switch, and his Pitchfork Mix (MP3), very cool that he gives Drop the Lime a shout out.

Heading out to Austin this weekend for the Austin City Limits Festival? Grizzly Bear and Art Brut not your thing? Can't decide between M.I.A. and LCD Soundsystem? Well, maybe see M.I.A. in the day, and then check out LCD Soundsystem at night - Friday night at Red 7. Or see LCD Soundsystem twice. UPDATE: Thanks commenters for bringing up the fact that the "LCD Soundsystem" set is only a DJ set.

Thursday - Sept 13
* The Fluokids Tour swings back through town, this time at Hiro Ballroom and with the buzzy rap crew the Cool Kids

Friday - Sept 14
* Fixed at Studio B with Boys Noize and Pink Skull live (should be very cool, their productions are awesome)
* Miguel Migs plays with his band live as Petalpusher at Rebel

FactoryPeople may have shuttered the doors of it's award winning boutique, but lives on in the online realm as FactoryPeople.com. And
we still like to throw the best dance parties. In keeping with that
tradition, we are proud to anounce the line-up for our ACL Fest '07 after-party at Austin's renowned hardcore club Red 7.

Black Madonna - Among Austin's finest dj's and certainly it's coolest.

Bands (Outside)
Ghosthustler - Currently heating up the blogosphere, Denton's Ghosthustler promise to bring the party.

Clap! Clap! - Austin's own. Resistence to this 8-piece's charm is futile.

Lady Pterodactyl - Straight outta Wimberly. We guarantee you will not see any younger (or cuter) girls rocking the synths this year.