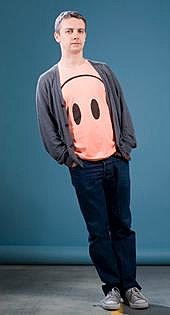 Its a busy week (month really) for dancing...

Ewan Pearson, a brilliant knob-man producer (The Rapture, Ladytron, Tracey Thorn, and Gwen Stefani), a prolific remixer (see his Piece Work 2 CD set out now on K7!), and a man of letters (a book and his Enthusiasm column) hits the decks for Robots at Cielo on Thursday night. I am partial to his Partial Arts work with Al Usher, but there is no doubting that the man can rock it in the big and small rooms. Check out his forthcoming CV:

2007 is shaping up nicely. A new album from M83 and single for Australian indie sensations Lost Valentinos are already in the bag. In July fabric released Ewan's contribution to their legendary mix CD series. This summer Ewan kicked off a new occasional label 'Misericord' with an EP from his Partial Arts partner Al Usher, later in the year Partial Arts will follow up their acclaimed 'Trauermusik' with a new single, 'Telescope', for Kompakt and on September 24th !K7 will be releasing 'Piece Work', a 2 CD retrospective of Ewan's finest remixes from the last 6 years. Crikey.

Teki Latex (of TTC), Institubes' boy-wonder Surkin, and 33Hz are at Hiro.

Claude Von Stroke and the Dirtybird (this month with Tanner Ross) drop back in to APT for their monthly wobble and gobble down.

Catch The Juan Maclean DJ at the Flavorpill party at the AMNH Museum (listen to Tim Sweeney's Beats in Space show for previews of tracks from TJM's new album) and then hustle it to Brooklyn...

Cut + Trouble and Bass do their Masters of the Universe slamdown and this time its with DIPLO at Studio B. Surkin, South Rakkas Crew, Drums of Death, and the T+B DJs crowd the decks for a bass-heavy massif...some $12 tickets are available here.

Fun at Studio B is on wheels. Down and Derby teams up with the Fun crew for a Roller Disco with Jacques Renault. Check out this mix Jacques (and Dan Selzer) did at People Don't Dance No More a few weeks ago at Studio B and also check out Jacques' new track on RCRD LBL.

If you need more disco, the legendary DJ Harvey and Prince Language will be DJing at the opening of the New Museum of Contemporary Art on the motherfuckin' Bowery from 12 am - 4 am. Free tickets for those times are sold out, so you should probably just show up and demand entry.

Flashback to LUXX: Avenue D are playing their last (NY) show on Saturday night at Area 51 (Hooper and Broadway) in Brooklyn. Debbie and Daphne hope you get too drunk to fuck, forever. Check their site for news on their going away DVD.