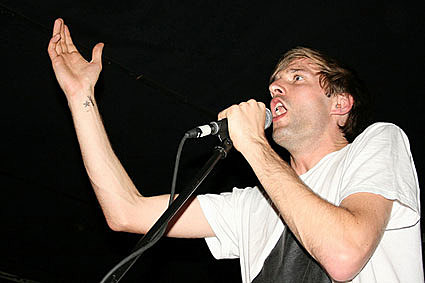 This week in dance kicked off with a great show on Monday at the Mercury Lounge with the NYC-debut of Spain's el Guincho and a set by Australia's brilliant, live electro band Cut Copy.

The band has a refreshingly straightforward style about sharing their electro-rock tracks, offering little in the way of theatrics. But lead vocalist, keyboardist and guitarist Dan Whitford is willing to offer his appreciation to the crowd and acknowledge the impending electro climaxes, giving the audience the green light to go nuts-and it works. [TheMusic.FM]

If you missed them, they're back in May, and this weekend looks equally promising with some big names passing through town. 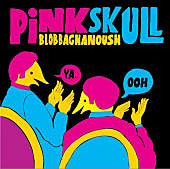 In addition to the great Palms Out Sound showcase going on at Luna Lounge tonight (Thursday March 20), Musebox is holding their monthly at 205 featuring Pink Skull, James F!@$%^ Friedman and Johnny Cocco, and it's $5 at the door or free if you RSVP now at rsvp@themusebox.net. While Pink Skull is just deejaying, and not doing one of their energetic live performances, the band's diverse influences, numerous side projects, and recent remixes should provide the makings of a good set.

Just a few days after this show Brooklyn-based independent 12" and digital-only label the Savant Guard will make it's worldwide debut release with Pink Skull's single 'Drugs Will Keep Us Together' on March 24th. It will feature the original version of the track along with a remix that New York's own 33Hz did with Ming (from dj duo Ming+FS). Fidget house master Trevor Loveys also puts his own spin on the track. You can download the original version over at Missingtoof and stream the remixes here. 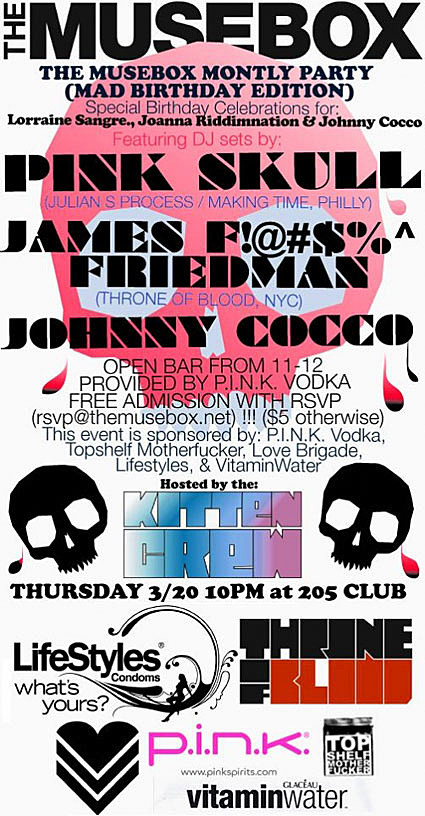 Modeselektor is one duo I don't know much about other than having heard their sets are amazing. Calling techno maven Ellen Allien's Bpitch Control label home, Modeselektor's 2007 release 'Happy Birthday!' is not what one would typically expect. Their diverse influences (Ed: electro, techno, and breaky grime) shine through with help from an equally unique pool of collaborators including the French rap group TTC, fellow Berliners, Apparat, Boys Noize Records up and comer Siriusmo, and even Thom Yorke. Check out this awesome live video. Their performance at Studio B promises to be equally amazing.

Electro-hip-hoppers JJak Hogan support as well as Trouble & Bass deejays Star Eyes and Mathhead. Check out Mathhhead's Doom&Bass mix (MP3 at the top of this post) which he recently made for New York based clothing line Mishka.

Advance tickets available here and at Other Music.

Saturday night New York is graced by yet another German electro pair, Digitalism. The last time they played here they set off the fire alarms at Studio B. The time before that looked pretty awesome as well. Hopefully the comparatively massive Webster Hall will be able to better handle the duo's big sound. Guns N Bombs are certain to provide an opening set that flawlessly transitions back and forth from their own gems to the latest electro that's been in your ears over the past month. 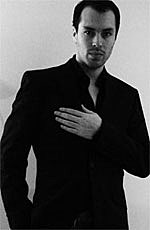 Before you leave your apartment Saturday night be sure to prepare yourself for a full night of dance so you can head over to People Don't Dance No More's official Digitalism afterparty w/ Serge Santiago....

He's remixed everyone from the Rapture, Goldfrapp and Armand Van Helden to his new sensually dark mix of Hercules & Love Affair, but you know we love him most for his wicked italo edit "Colour Series" releases. In 2005, Serge launched Arcobaleno Records as an outlet for his own original tracks and edits, including the massive "Atto D'Amore." Arcobaleno will continue its steady growth in 2008 with the digital release of both his own work and those of his contemporaries: the darkly funky "The Boobytrap" by Kenny Hawkes + David Parr is out now. Serge's DJ career began at the infamous Stompa Phunk club in Brighton and has taken him to clubs across Europe, including a legendary residency last summer at We Love...Sundays at Space in Ibiza.

This Saturday night Serge will be treating us to a very special italo set crafted just for New York City. - David Bruno

Adam Kesher will also be performing. "He" is actually a 6-piece Parisian band that puts on amazing live shows:

I was awed, absolutely starstruck, completely floored, stupefied even! The songs, the actual performance and showmanship which included some heavy fancy footwork and instrument rotations... it just all coalesced into a supercharged set that left the room, which wasn't even packed to capacity, dense with energy." - La Decadanse.

Saturday is the last stop on their US tour before they head back to Paris. They won't be back in the states for a while so don't sleep!

You can also expect Wurst Edits head My Cousin Roy to be serving up his own tasty disco jams as well as those of Douglas Sound and Runaway, also part of the Wurst family. The boys responsible for Saturday's wild affair, Robot Blair, and David Bruno will also take their turns behind decks.

Advance tickets are $10 at Ticketweb and if you can grab a flyer outside Webster after the Digitalism show or its $15 at the door. 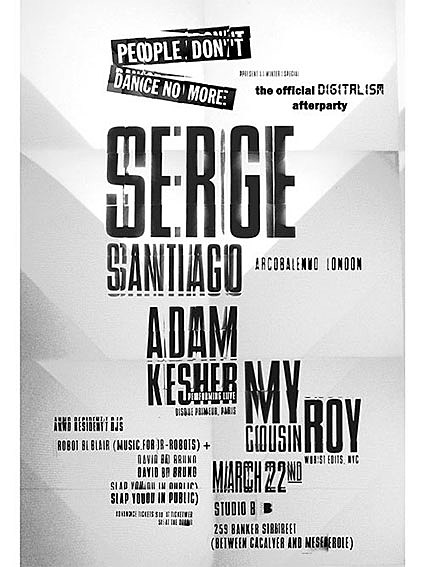 BONUS (editor's note): I asked Showtrotta do let us know who to look for at SXSW, well....yes, SXSW is over now and I couldn't get it up, so here it is anyway because even without SXSW, these artists still exist.....

Simian Mobile Disco - Whether it's their live show or a dj set, SMD will give you the most bang (literally) for your buck. Their live shows are sonically devastating and their dj sets are the perfect balance of their own tracks & remixes combined with the latest electro around, some dance classics, and the unexpected.

MSTRKRFT - Their dj sets are so solid I would see them at SXSW even though I just caught them at Studio B on Friday. JFK and ALP relentlessly play one banger after another making it impossible to stop dancing.

Mixhell - They did a mix for xlr8r last month that I could not stop listening to. You might think a dj duo comprised of a heavy metal drummer and his wife could be really bad. Thankfully it just makes for eclectic sets with the perfect amount of heaviness to leave you stomping on the dance floor.

The Black Ghosts - With Simon Lord on vocals and DJ Touche taking care of the electronic end, this duo are the perfect fusion of a live show and a dj set. Simon's vocals will satisfy any Simian (pre-Mobile Disco) cravings, while DJ Touche's beats will make you move in a way Simian never could.

Ralph Myerz - My good friend Eddie gave me 'A Special Album' by Ralph Myerz. The sticker on the outside called it "an ideal companion piece to that classic...Royksopp's 'Melody AM' ". That description could not be more accurate, and while the album is 5 years old, the sound is still present in their newer material despite it having more of an electro-rock feel. Would love to hear what a live Ralph Myerz experience is like.