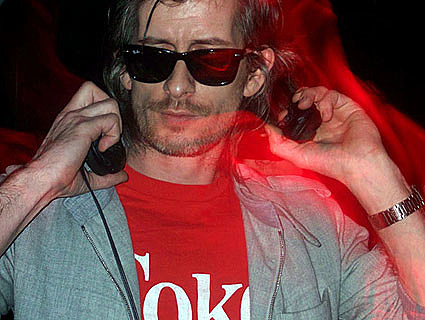 As I mentioned last week, after a string of disappointing deejay sets I've been reluctant to allow myself to get too excited even when acts I've previously been amazed by come to town. I did a pretty good job of staying calm leading up to Kavinsky's set at Studio B on Saturday. Firstly, I have to give props to Jen Lasher for spinning a set that was much more interesting than many more well-known DJ sets I've seen recently. She covered quite a lot of ground in terms of dance music, and she wasn't afraid to drop a few oddballs and pop songs in there either. She took a relatively tame and sparse midnight Studio B crowd and whipped them into a dancing frenzy by the time Kavinsky took the decks at 2.

When that finally happened I found myself desperately hoping his set would be good and thankfully it was! He started off well, playing Mr. Oizo's remix of "Merrymaking at My Place" by Calvin Harris (who makes his way back to NYC this Monday), and D.I.M.'s remix of "My People" by The Presets a few songs in. He also played some electro that was less recent, but worked well despite this because of his timing, choices, and good mixing. About a half an hour or so in, something shifted, and Kavinsky's set went from good, to one of the most fun sets I've ever gotten down to. It was the perfect mix of classic dance tracks, brand new electro (he played the two new SebastiAn tracks which are perfect for the floor and a loud system), old electro, and random-ness (Phil Collins - Sussudio?!). He kept "the B"'s floor the most packed I've seen it in a while until a little after 4. It was easily one of the best sets I've witnessed this year. You can read my more detailed review here and stream a playlist I made of close to 20 of the tracks Kavinsky dropped at the B that night.

This weekend is another one full of dance. Get ready to start making decisions. Here is what is happening on Thursday (April 24, 2008) alone!..... 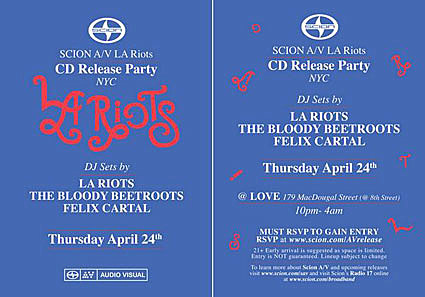 L.A. Riots will hit Love on the second night of their mini-tour of CD release parties celebrating the mix they recently completed for Scion. It features some of their own remixes along with lots of other electro. You can stream it here along with the many others (IHEARTCOMIX, Daptone Records, Flosstradamus, and more) in the series. 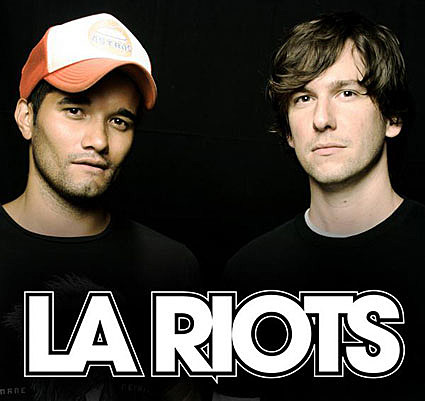 With any luck Italy's The Bloody Beetroots will be destroying the dancefloor like they did at Hiro and Studio B last month with their excellent blend of current dance tracks and their own crunchy, vuvuvuuuuuu-heavy remixes and tracks. If you have no idea what I'm talking about I highly recommended listening to their NLLR mixtape (download link above) which features a relentlessly banging mix of tracks that are either their own or remixes they have done. I know I've mentioned it before, but I can't say enough good things about the No Love Lost Records Mixtape project. They are up to 40 mixes, some from well known deejays as well as great ones from deejays flying a bit under the radar. Speaking of which, Felix Cartal got lost in the shuffle of deejays I've been meaning to check out. Luckily he also did a mix for NLLR records (download link above) which leaves me eagerly looking forward to hearing what all the fuss is about in person as he is also on the bill for Thursday night at Love. Also be sure to check out NLLR's Facebook group to stay updated on the latest mixes as they're released as well as info on the music No Love Lost Records will be putting out in the future. 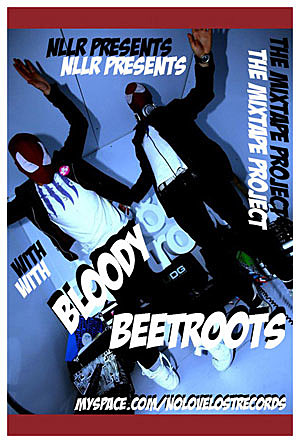 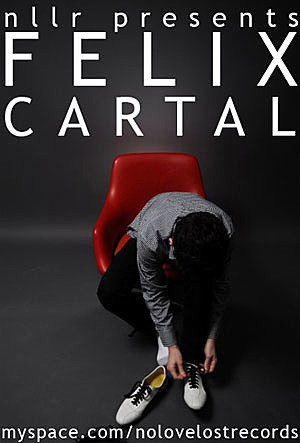 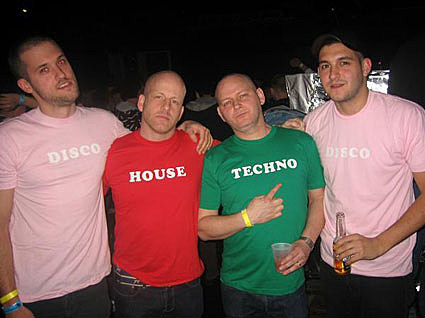 Holy Ghost (pink/disco) and the Juan Maclean (red/house) - Shit Robot (green/techno) will not be there....

Another option for Thursday with more of a New York/disco slant - DFA comes to Hiro with The Juan Maclean and Holy Ghost. Juan has been killing it for years, and Holy Ghost has recently been making people get down with their excellent modern throwback disco tune "Hold On". They both recently threw down some great music at PopRally's DFA Dance Party at MoMA. If you missed it, or just want to experience it all over again, their sets (along with Justin Miller's, Jacques Renault's, Tim Goldworthy's and Tim Sweeney's) from that night are available for download here. 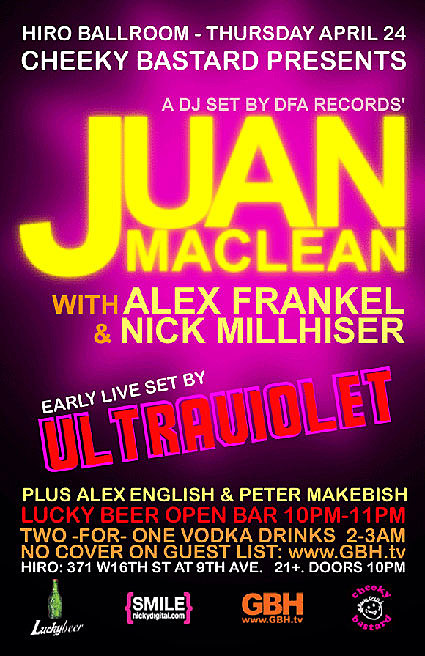 This week Still is putting the legendary Ron Trent behind the decks for a special Prescription Records retrospective and preview of his new label Future Vision. You know its gonna be deep.