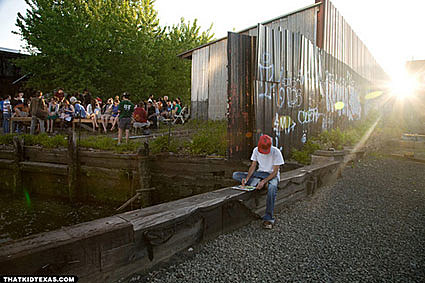 Despite getting a late start, I had one of the most unexpectedly awesome weekends last week. After a day of sweating it out at a bbq, and several fruitless attempts at a disco nap, I dragged myself to Studio B, arriving in the middle of Lifelike's set. After being badgered by certain individuals for months I still hadn't really checked out Lifelike. I was totally unprepared for his devastating mix of new, classic French house-influenced tracks, perfectly balanced with underplayed electro bangers (finally got to hear SMD's 'Hot Dog' on a big system). The floor was more packed than I've seen it there in a long time and everyone was absolutely losing it (and Alan Braxe hadn't even gone on yet!). Lifelike held it down until around 2:30 when Mr. Braxe went on. As much as it was great to hear French house classics from one of the people who pioneered the sound, and as crazily as I had been getting down, about an hour in things were starting to give way. Maybe it was the change in intensity from Lifelike's set to his, but somewhere around 3:30, after a numbingly long play of Daft Punk's "Rollin' & Scratchin' " I was ready to go.

Originally that was my only dance-related weekend plan, but when I was writing about Saturday & Sunday's events I really liked what I heard from Trusme. Thanks to the wonders of the G-train, what should've been a 30 minute ride to the Yard took 2 hours. I'm not even going to get into it, but if you're taking the G train, factor some time getting f-ed over by the MTA into your commute.

When I finally arrived, the Yard had a very friendly, backyard (one of the only things I desperately miss from suburbia) bbq vibe. Everyone was just hanging out, eating (Sweet Deliverance's food was amazing. I had the best veggie burger I have ever eaten.), and drinking. Nobody was really dancing yet (it was about 5:30 or 6). The later it got, the more people slowly trickled out onto the dancefloor, and by 8 when Trusme went on there was not an inch of floor to spare. Trusme's set was perfect for summer - a great blend of disco and soulful house - perfect hot weather listening. Everyone was having serious fun. I would endure my two hours of MTA-induced hell to do it all over again. That's how good it was.

Don't fret if you missed out, there are plenty more Sunday Bests on the way (plus they've been recording all the guest dj sets, including Trusme's - then them here), and it looks like Trusme and Giant Step have something in the works for July 30th at the Hudson Hotel.

That's a while away though...on to this week in dance:

To me disco and summer just make sense...like peanut butter and jelly. Two of my favorite disco-ers - Robot Blair and Brooklynvegan writer David Bruno will make you get down at Trophy Bar (don't get locked in!) on Friday with their latest People Don't Dance No More party. All the details are below. Be sure to check out Dave's Muxtape and his live set from last month's party at Love at the top of this post. Also, don't forget to buy your ticket to People Don't Dance No More's Wurst Boat Party. It's going to be a great disco adventure with the residents plus My Cousin Roy and Lee Douglas. July 3rd is sooner than you think! All the details and ticket info can be found here. 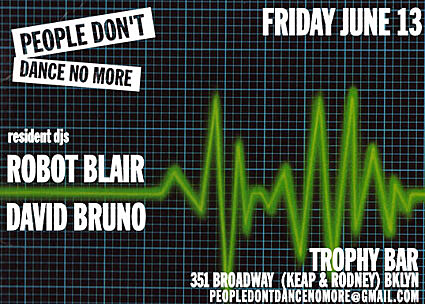 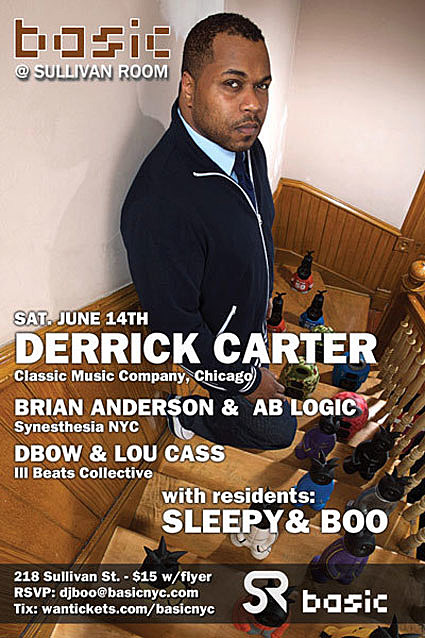 Saturday night Chicago house legend (who's made a ridiculous amount of music), Derrick Carter, will be at Sullivan room. I think this is one of those things you're not supposed to miss.

if you're looking for something less classic, and more now, Palms Out and Finger on the Pulse are throwing what looks to be a great rooftop party in Brooklyn. It starts out early (8pm) with some bbq-ing, followed by some great deejays including a couple of guys I especially dig - AC Slater (who you can learn more about and download some tracks here as well as a mix at the top of this post) and Mathhead (who's celebrating the release of his record, the Turn the Music Up EP out on Palms Out and Trouble & Bass!). The location is a secret right now, but the full dj line-up is on the flyer below. You'll have to check out Finger on the Pulse's myspace on Saturday for the location. 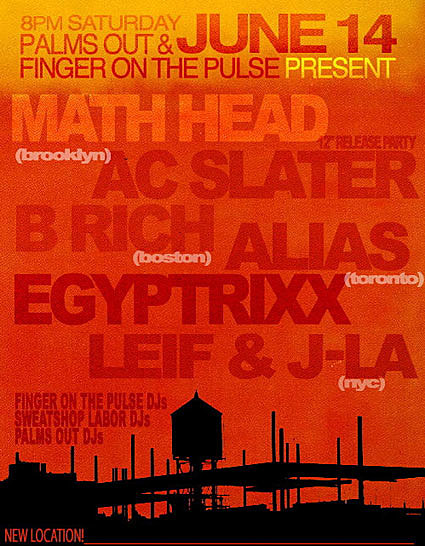 Sunday is all about being outside. You've got Stefan Goldmann at this week's installment of the Yard's Sunday Best parties (which I already heavily recommended at the beginning of this post). 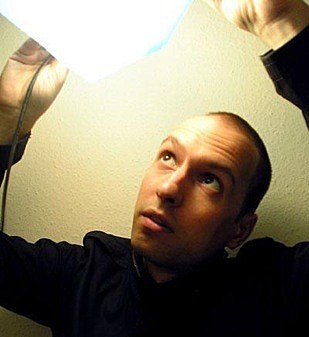 "The Innvervisions artist's jangling, melodic dance music was made for a Sunday.

Some more fresh air dance is going on Sunday at Urb's Wild West Boat Party. It features Luke Fair whose diverse sets are known for touching on a variety of styles of house, as well as electro. James Talk brings the funk/acid house, while Thomas Pategas keeps it funky and bass-intensive. They each have a fair amount of downloads on their respective myspaces/websites to get a better idea of what to expect. 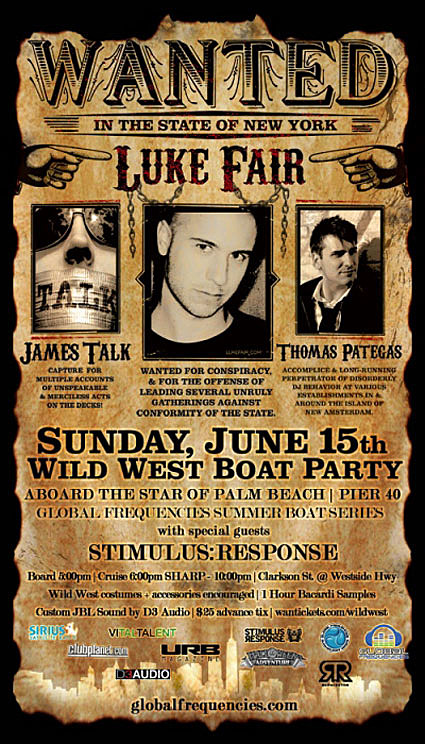 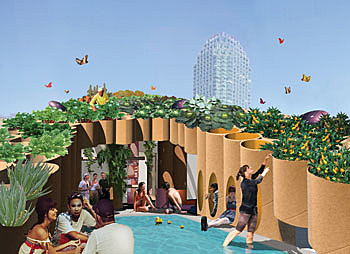 Getting down at the Yard last week made me remember how much I absolutely love dancing outside. I can't wait for PS1's Warm Up parties to start. They haven't announced the 2008 line-up yet, but it can't be too far off (the parties usually start at the end of June). In the meantime they've posted the winning Young Architect's Program design for the outdoor courtyard area. It's called PF1 (Public Farm One) and it's quite impressive. It'll be like dancing under a futuristic farm. Check out the design and prepare to free up your Saturday afternoons/early evenings.