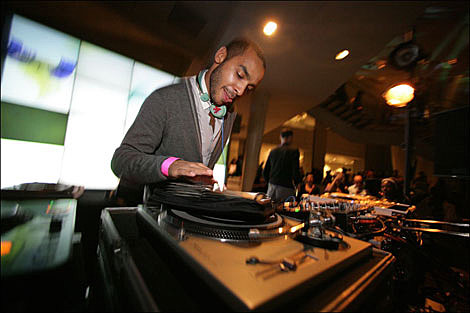 Last week was amazing. I took Thursday night off in anticipation of the running around I planned to do the following night, going to both this month's One Step Beyond at The American Museum of Natural History followed by MSTRKRFT's Fist of God tour at Webster Hall. I arrived at the museum around 10:30 and caught the last half hour of Mattie Safer's set. In that time he managed to happily crank out Green Velvet's "Shake & Pop", "Wassup Wassup" by Rye Rye, "Everybody's Got To Make a Living" by Dances With White Girls (which is featured on the Rapture's !K7 Tapes mix I mentioned last week and is also due to be released soon on the Dances With White Girls EP on the Rapture's label, Throne of Blood), "Whoo! Alright-Yeah...Uh-Huh" by the Rapture as well as some hip hop classics as he danced behind the decks, and sang along to himself...

Mattie's set was matched by an equally upbeat one from the always energized DJ Mehdi. He had the crowd (and Mattie who was happily dancing around and egging them on) getting down like no one I'd ever seen before at the museum. Below is just a small sample of what he played. The rest of his nearly two hour set was just as eclectic.

From there I scurried downtown and it made it to Webster Hall just in time for MSTRKRFT. Just as I reached the bar on my way into the main room the house lights went completely black while the stage began to glow brightly as the speakers erupted with the unmistakable thump of MSTRKRFT. For the next hour and a half Webster Hall was packed wall to wall with people dancing, jumping, and shouting along as one sweaty mass determined to get down to the Toronto duo's bass-heavy selections (partial setlist below). I found the crowd to be much better this time around with fewer Webster Hall regulars and the people in my vicinity just focused on having a great time, smiling and nodding with approval as we all got down.

I had an amazing time dancing and a lot of fun at this show and only had one gripe: nothing MSTRKRFT played was especially new or mind-blowing. They played a wonderful, banging, super-energized set on Friday, I just wished they played a little bit more new stuff.

MSTRKRFT finished up somewhere around 2:45 at which point Congorock went on. I had really, really been looking forward to seeing him, but after just being devastated by MSTRKRFT and DJ Mehdi earlier in the evening, my ears were no longer computing any new music. I stood there listening for almost a half an hour and I was completely incapable of forming any opinion, so I went home.

24 hours (not enough of which were spent sleeping) later I was at Le Poisson Rouge. It was my first time there for a party as opposed to a concert event. It works equally well for both purposes, reminding me of a more intimate, slightly more decorated version of Studio B with deejays spinning just slightly above crowd level on the stage. I witnessed the majority of Fukkk Offf's set which was a bit perplexing, as at certain times it seemed like fine (not great, but not bad) generic dance music, while at other moments certain tracks sounded pretty awesome and banging. While I believe they played their own tracks for most of the set, at one point they mashed up one of their songs (Rave is King) with a song called "Dance with the Dead" by a Canadian duo called Supercycle. I was taken completely by surprise since I'd been following Supercycle since last year and had never heard their tracks played out before. Give 'em a listen when you have a chance.

Anyway...shortly after 1, Surkin finally went on. Well worth the wait, the young Parisian tore it up for the next hour and a half, expertly manipulating beats from a great selection of current tracks as well as some old school jams (partial setlist below). Everyone in the place proceeded to get down, including DJ Mehdi who was just there hanging out, supporting his fellow Frenchman.

When Surkin's set ended at about a quarter to 3, I thought it was a bit odd when Alex English went on. I wrote if off though, thinking that perhaps Para One was going on at exactly 3. When it was nearly 3:30 with no Para One in sight, I left. I have since found out that Para One had arrived at the venue earlier in the evening but was feeling sick and had to cancel.

Here we are again...one last weekend of getting down before New York City turns into one big dance party for CMJ. There's plenty happening this weekend to get you warmed up for what's ahead next week: 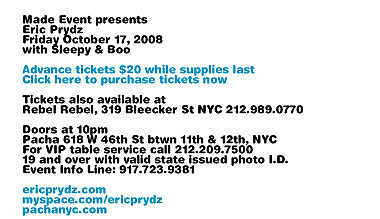 We already know what happened on Thursday which brings us to Friday (10/17), when the third Swedish House Mafia member Eric Prydz will be deejaying at *dun dun dun* Pacha. I've only been there once and haven't really had any urge or reason to go back, but after familiarizing myself with some of Eric's tracks, and reading a rave review of his set there last November, I would definitely consider it. Advanced tickets available here.

Also happening Friday, Brooklyn's own Streetlab are at Ruff Club at the Annex. They'll be celebrating the release of their self-titled EP which you can preview here. Also be sure to check out their installment of Nicky Digital's - Pre Party Jamz series.

Friday night is also the Grand Reopening of Studio B! They're kicking things off with a lot of house from Derrick Carter (check out his podcast and interview over at Resident Advisor) and Doc Martin. 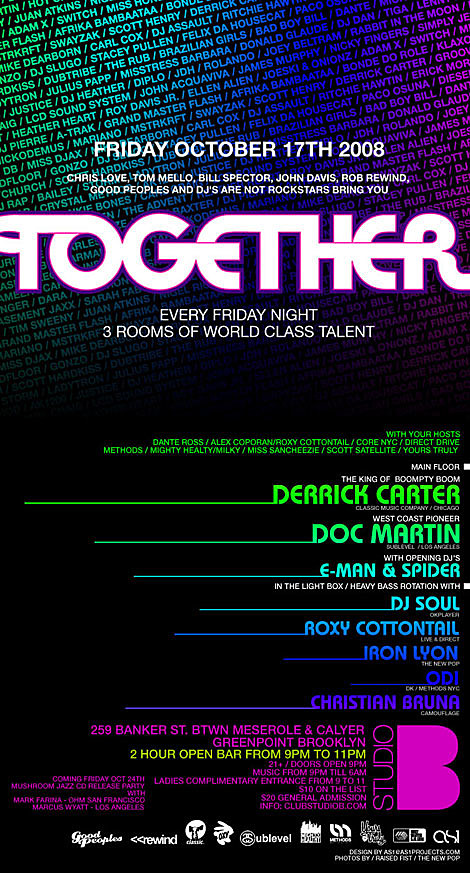 Also on Friday:
- Flashing Lights and a Spectral showcase are happening at Public Assembly.
- Jesse Mann and Nikola Baytala are deejaying downstairs, while Jacques Renault is upstairs at APT.
- Devlin & XXXChange of Spank Rock deejay at Le Royale: 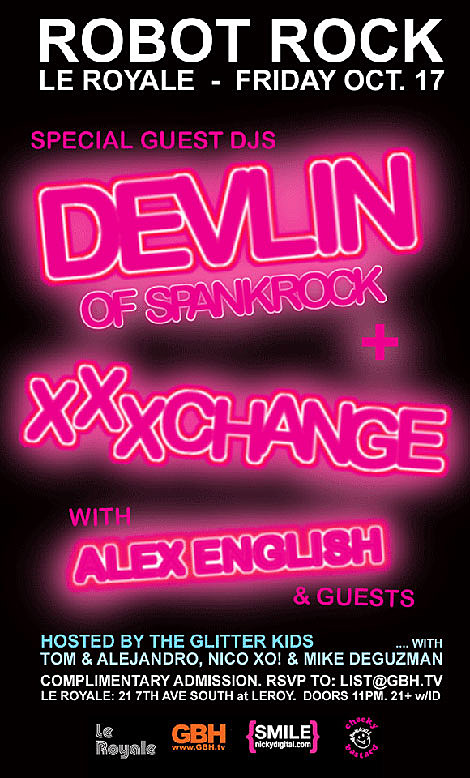 No Cover with RSVP to list@gbh.tv with your name and number of guests.
Ask for the GBH guest list.

1. Juan's live electronic act is very good. This time around Nick Millhiser and Gerry Fuchs (!!! and Turing Machine) will be supporting along with Nancy Whang of LCD Soundsystem doing live vocals.
2. I was all ready for this show to happen on the 4th and then it got moved!
3. Jack Oatmon, (who writes an excellent dance column that always points me in the right direction when I'm up in Montreal), gave Juan's show an excellent review when he played there last month.
4. Juan's new track, "Find A Way" is awesome. You can download it from RCRDLBL. It's off of his Find A Way Tour EP which features all new material and can only be purchased on his current US tour.
5. Fellow DFA-ers, Holy Ghost are opening!

It's pretty much the move for Saturday. There's also Steve Aoki at Touch (yikes!). Possibly a good night to call it early, especially given what's up for the rest of weekend, not to mention next week:

Sunday (10/19)
- Nicky Siano is at Santos.
- Dim Mak presents at Blvd with Stretch Armstrong, Eli Escobar, Pase Rock, and a secret guest that's not too difficult to guess. Free with RSVP to partyline@dimmak.com. $5 without.

Monday (10/20)
- Jellybean Benitez is deejaying Giant Step's 19th party at the Hudson. Click here for more info and to RSVP.
- Francois K is at Cielo
- Fafi & Mehdi WELCOME TO NY! (An Unofficial CMJ Warm Up Event) with Nick Catchdubs and Roxy Cottontail: 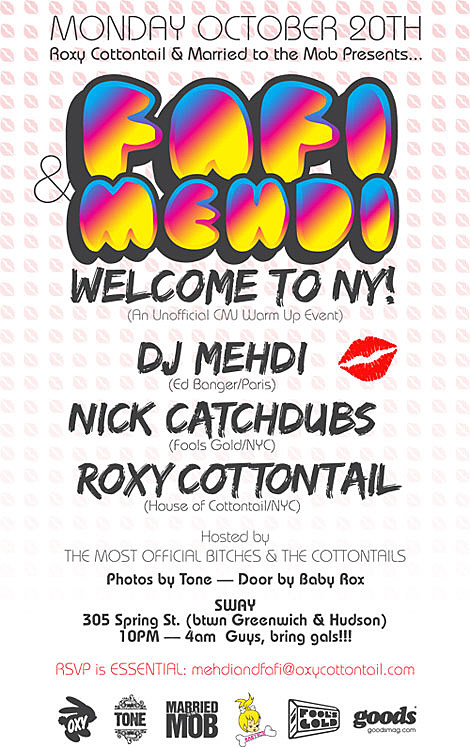 - Finger On The Pulse and Treasure Fingers are at Crunch (yes, the gym): 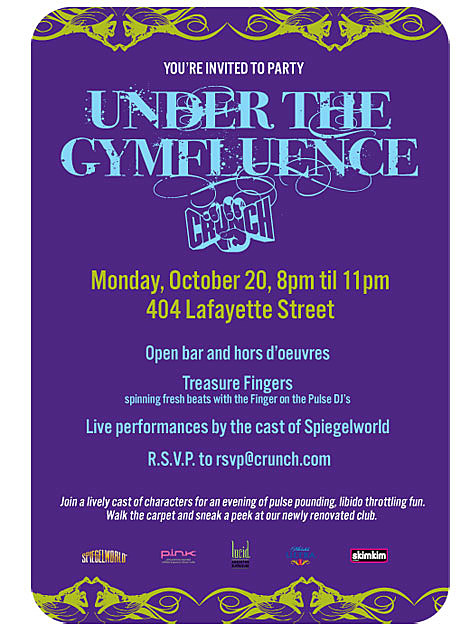 That should take you through the weekend and into just the very beginning of next week. Look out for a special early edition of the Week In Dance with some recommendations for where to get down during CMJ!