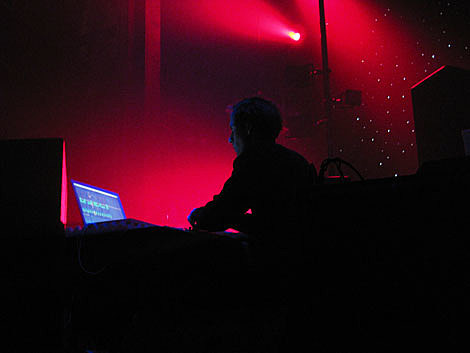 The past few weeks have been amazing dance-wise. Perhaps it was only a matter of time before there was some type of lull. I wouldn't say last week was bad...just nothing like the few weeks before. I started last week off early Thursday night at Hiro for the Hours showcase which featured Fires of Rome and Cazals. I only caught the last few songs of Fires' of Rome set, but their playing was tight and sounded very true to their album which somehow combines elements of classic rock with hints of 60's/70's and a bit of dance. Going into the evening I was more familiar with Cazals and like their material better than Fires' of Rome, but overall wasn't that engaged by their performance, though their playing was good, and the live versions of their tracks "Somebody Somewhere", "Poor Innocent Boy", and "Both Sides" were excellent and really stood out. The rest of the tracks however, just seemed to breeze right by. In all fairness, Cazals' keyboardist was absent, which I imagine took a way some of the more electronic/dance elements of their sound. Overall it was a decent night, just a little less dancey than I would have liked.

more about last week, and lots of upcoming events, below...

Friday things theoretically should have been more dance-friendly with Sasha at Webster Hall, but I couldn't connect with his set at all. The sound was good and initially I was fine with the direction his set was headed...until it seemed to be headed toward the same beat for the first hour. I usually will stick it out through any deejay set, hanging on to even the slightest shred of hope that it will get better, but after a truly uneventful and repetitive first hour I had to call it quits.

For me the highlight of the night was Ulrich Schnauss who started the evening off with a wonderful hour of exciting beats gradually emerging from a sea of atmospheric sound. I've seen Ulrich many times and his set was true to form - things start off very mellow and calm and build-up to something more complex and fast-paced, but ultimately still remain closer to the listen & appreciate vs. the lose it on the dancefloor side of things. His set was true to this until the last 15 minutes of his set at which point there was a marked shift in the sound. The quiet German who up until this point had been calmly sitting and playing a small keyboard, ocassionally reaching over to adjust levels or tweak something on his laptop, was suddenly on his feet, furiously twisting knobs and delivering unexpectedly crunchy, banging beats. I'd read earlier last week that he is currently working on a new album...a dance record? from Ulrich Schnauss? I can only hope that we'll be so lucky.

This week in dance has a few good acts from out of town, but overwhelmingly seems to be about some good, local parties & deejays. In any case, it should all be good for the get down. Let's get started:

Thursday (11/13)
The good guys over at Resident Advisor have put together their first American tour with Dixon and Kristian Beyer (1/2 of Ame - stream a recent mix they did for Red Bull Music Academy here - tracklisting below). Brendon Moeller is opening for them at Cielo and plans on playing "some tracks from his upcoming EP on Apnea, as well as from his April 2009 full-length, Jazz Junk Safari, on Third Ear Recordings." 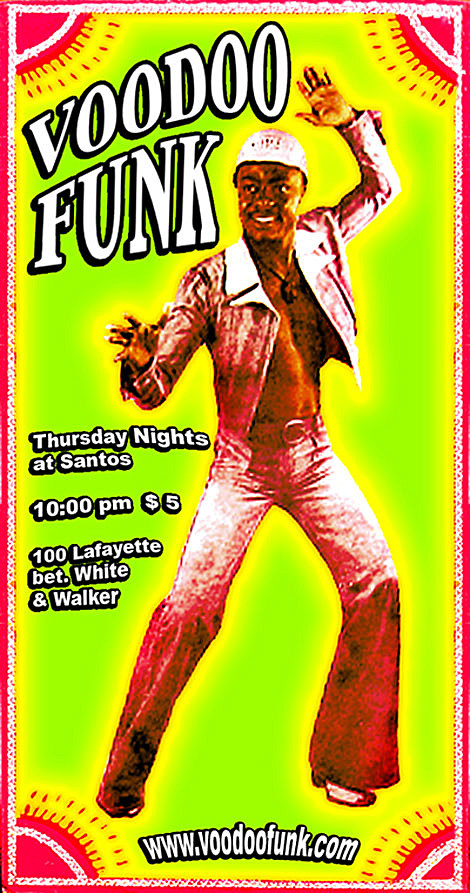 Also on Thursday, Voodoo Funk is happening at Santos. Check out the trailer below for "Take Me Away", the documentary chronicling DJ Franc O's 3-year crate digging adventure in West Africa (the party focuses on playing some of his great finds from this journey):

"Take Me Away Fast" Trailer from Leigh Iacobucci on Vimeo.

Friday (11/14)
Early Friday evening, the excellent electronic/shoegazey French act, M83 are at Webster Hall. I've seen M83 many times over the past few years, and despite varying set-ups and incarnations their live shows have been consistently excellent. This was the case the last time I saw M83 at Music Hall of Williamsburg (the night after their show at Bowery), where Anthony Gonzalez and band mates managed to give the crowd more rocking renditions of older album favorites as well as new material from Saturdays = Youth without compromising the more mellow, subtle, elements of their sound. Highly recommended. Ticket info and video of Anthony Gonzalez (M83) explaining the inspiration (being a teenager) behind Saturdays = Youth below:

You'll still have plenty of time left to get down once that's over at Webster. Here are some things to do later in the evening.

If you're looking to stay in the city:

The Fixed crew (JDH and Dave P) will be deejaying their own good, old fashioned, sweaty dance party at the Gallery at Le Poisson Rouge. Info below and check out their Top 10 for October to see some of what you might be hearing Friday night: 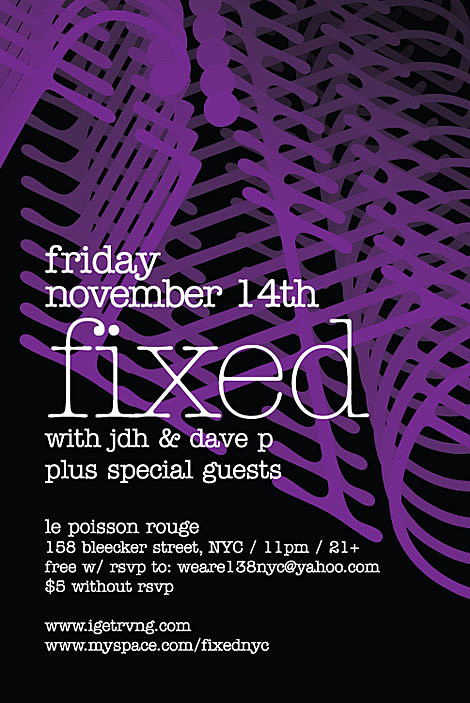 Here are some things happening in Brooklyn:

If you're in the mood for a more disco-oriented get-down, People Don't Dance No More is back at Trophy Bar with the Wurst man - My Cousin Roy. Residents Robot Blair and David Bruno will be deejaying as well. Download Robot Blair's Mix for a November Day here. Tracklisting and party info below:

Robot Blair - A Mix for a November Day tracklisting 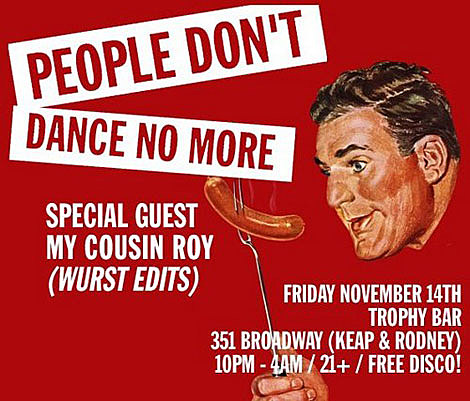 There's also more disco-ing to do be done at Sharegroove, happening at Royale in Park Slope: 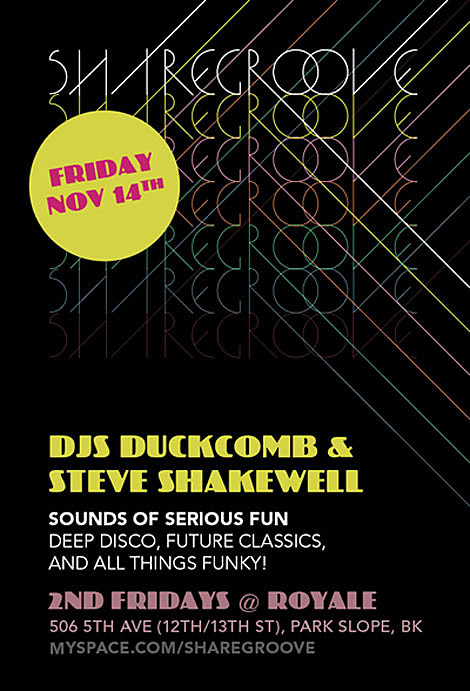 If you're in the mood for some funky, soulful, house Miguel Migs is at Studio B along with Lisa Shaw and Julius Papp: 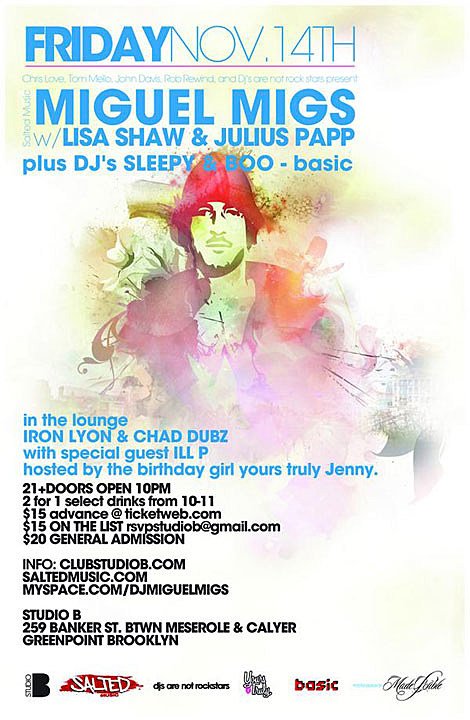 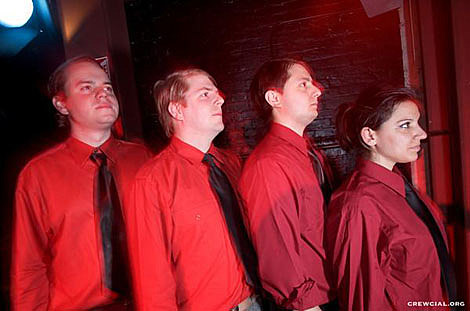 Something a little more electro-oriented is going on at Public Assembly where the Flashing Lights crew (Nick Catchdubs, Jubilee, and Ayres) continue to hold it down with their weekly in the front room. This week's party features XXXChange. It's at 10pm, always free.

...a resident DJ for Paxahau in Detroit, who have organized the past three DEMFs. He is perhaps best known for holding his own in a tagteam set with Richie Hawtin and Luciano at a Paxahau afterparty in Detroit on Labor Day Weekend 2005 (you can hear this any many other sets on the Paxahau website) 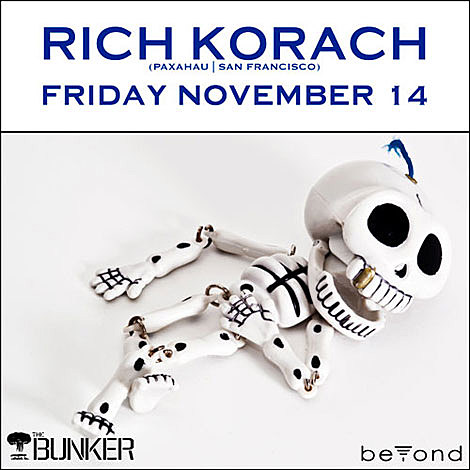 There are two parties happening Saturday that I'm really excited about. One is Korrupt #8 - it's been way too long since I've been to one of the Korrupt parties. They always bring something different, have a great vibe, and are a lot of fun. Case in point - this installment features Boy 8 Bit, Nick Hook, and Jubilee. In what has been at certain points a (pleasantly) French-dominated year in dance music, Boy 8 Bit's tracks and remixes have a been a breath of fresh (though sometimes grimey) UK air. After missing his shockingly early set at Webster Hall last month, but arriving in time to hear way more B-more than I ever needed from Diplo instead, I am more than looking forward to this party. 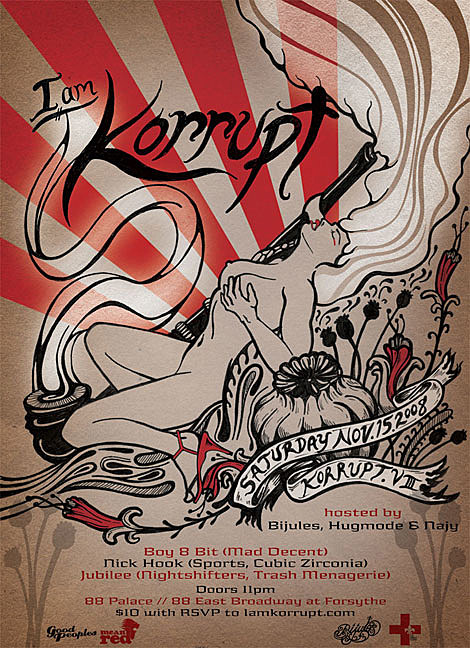 The second party I'm looking forward to Saturday is Justin Martin at Sullivan Room, on tour in support of his recent release Chaos Restored 2 (out on Buzzin Fly). Party info and tracklisting below: 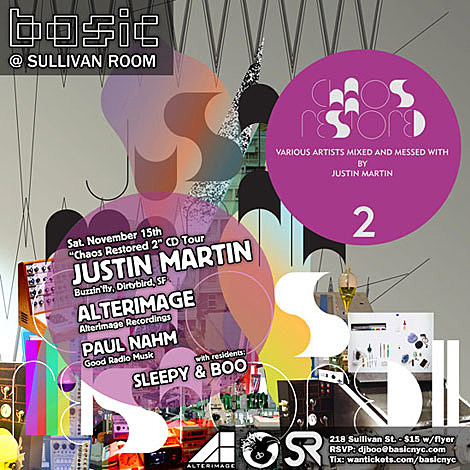 Monday (11/17)
- Francois K is at Cielo with an opening set by Dub Gabriel.
- Marques Wyatt is deejaying Giant Step's 21st party at the Hudson. Be sure to RSVP.

Tuesday (11/18)
- The Girl Talk afterparty (for the last of his 3 sold-out shows this week/end at Terminal 5) features a lot of performers and deejays and is happening at Santos.

This week I came across a mix that Simian Mobile Disco did for In the Mix (N-Joy) and was really surprised by it. I've been listening to James and Jas for a long time (back when they were still part of Simian and used to deejay on the side) and know that when it comes to deejay sets you never know what to expect from them. However, even with that in mind, this set totally threw me off. I've only had a couple of chances to listen to it and am still trying to figure out exactly how I feel about it. Download it at the top of this post and let me know your thoughts on it in the comments.