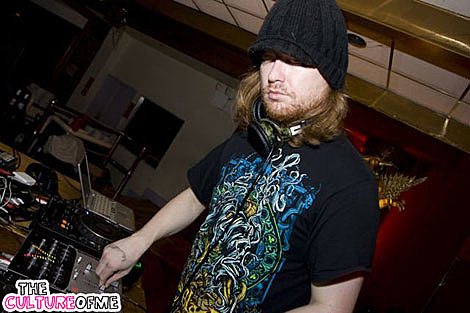 Last Saturday despite only considering two options, I had a tough decision to make. I hadn't seen Justin Martin deejay since January, but I had come so close to seeing Boy 8-Bit (without it actually happening) last month that I needed to go to Korrupt 88 Palace (a venue that wasn't very easy to find).

If you haven't been (this was my first time), 88 Palace is a dim sum restaurant on the second floor of a mini-mall that is under the Manhattan Bridge. As you walk in there is police tape up so you are pretty much corralled up the stairs, straight to the restaurant. I was a bit skeptical/curious about how this was going to work as a dance venue...but it worked pretty f-ing well. The place is shaped a bit like a stretched out horseshoe with a bar running down one side, tables scattered everywhere and a dancefloor at the end. I don't remember what time it was (probably sometime between 1 and 2) when we arrived, but the party was already packed and grooving. You could pay for shots that they would pour straight from the bottle into your mouth at the bar, apparently there had been jello shots earlier...I don't think anyone who was drinking was feeling bashful about hitting the floor.

We worked our way up to the floor shortly after we arrived, just as Boy 8-Bit began his set. Much like when I saw him in March, he dropped a more UK-influenced set, (that featured other stuff too)...but was just a pleasant far cry from so much of the French music (old and new) I've been (happily) listening to over the past year. It was one of those sets that was so good I was too busy dancing/had absolutely no desire to attempt a setlist, but a few good tracks I remember are below. I did'nt know lot of the really good stuff Boy 8-Bit played though - perhaps some new music of his?

that setlist and lots of upcoming events, below...

Tiga - Mind Dimension
Fake Blood (who will be here in New York in a couple of weeks!) - Mars
Bumblebeez - Rio (Boy 8-Bit remix) (a great remix - I didn't think anything could get me past the vocals, which are not my favorite, on that track)
Kid Cudi - Day N Night (Crookers remix)
Chemical Brothers - Midnight Madness

Hopefully you were able to get some good dancing in so far this weekend (Friday night's events are HERE). Here are a couple of things going on Saturday night (11/22), plus plenty of options for dancing right up to Thanksgiving.

Saturday night I'm most excited about Green Velvet deejaying at Sullivan Room. I've missed him the past two times he's been in town, and am more than ready to hear what the man who's been releasing some great, (and now classic) dance tracks over the past 15 years has to play. Check out a video of him performing (I didn't realize he does live vocals!) one of his hits (La La Land) at Studio B back in June: 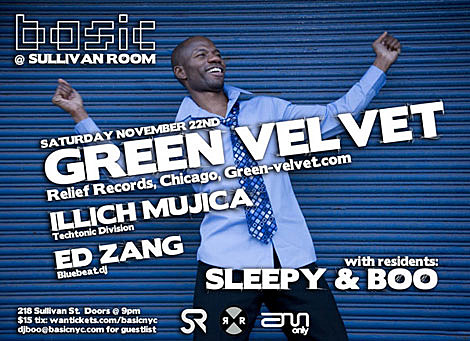 If you had a great time disco-dancing at Play It Loud Friday (or wanted to but couldn't make it out) you're in luck because Darshan Jesrani of Metro Area, Son of Sound, and Doug Gomez are back deejaying a second night in a row, this time in Brooklyn at Public Assembly.

Play It Loud! is an event that celebrates New York club and art culture during its golden-area run in the 70's and late 80's. While there is certainly no shortage of disco and post-disco nostalgia-fueled gatherings these days, Gomez, Maldonado and Jesrani come together to help reinforce the musical integrity and vibe that is seemingly disappearing in New York nightlife. A celebration in honor of a lost New York art scene; Play It Loud! is a haven for the creative and supports artists in the form of galleries, showcases, musical and visual performances.

Be sure to check out the Play It Loud blog and podcast. 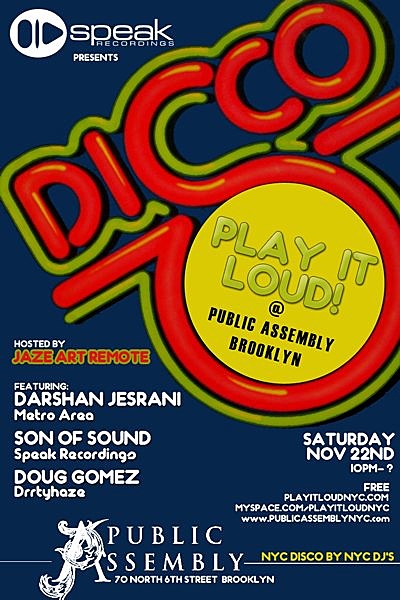 in the back room.

Here are some things coming up Sunday into next week:

Wednesday (11/26)
- Louie Vega and Kevin Hedge (Blaze Imprints) are deejaying the 4th annual "classics" party at Cielo with a surprise classic performing artist .
- Deadmau5 is at Webster Hall.
- Melchoir Productions is doing a live set at the Pre-Thanksgiving Bunker at Public Assembly.

Is it me or did November fly by? Looking ahead, the line-ups for December seem great so far. Here are some things I'm really looking forward to...

How about you guys?