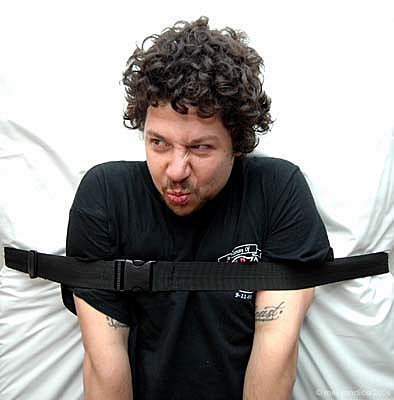 It's the first dance post of '09 and regrettably, I have not been out dancing much since the Scion party with Fake Blood, Lifelike, and Franki Chan on December 16th, but next week there will be a review of a great New Years Eve spent with Sinden and Jokers of the Scene (among others) at the soon to be closed Studio B. In the meantime, here are a few great ways to dance straight into 2009....

Friday night (1/2) at Webster Hall, Ed Banger's art director So Me is headlining and as much as I like what he's done in terms of album sleeves, videos, and even the ocassional remix...his past deejay sets have left me less than impressed. Fortunately there are a lot of others deejaying at Webster that night to keep you entertained including One Man Party whose fury behind the decks comes close to that of his performances behind the drums for Soulwax. If you're in the mood for something a litle less electronic, Cosmo Baker of The Rub (pictured at the top of this post) will be in the marlin room playing stuff that is a bit more classic and old school on the rap, soul, and disco side of things. Check out some of his themed mixes here. 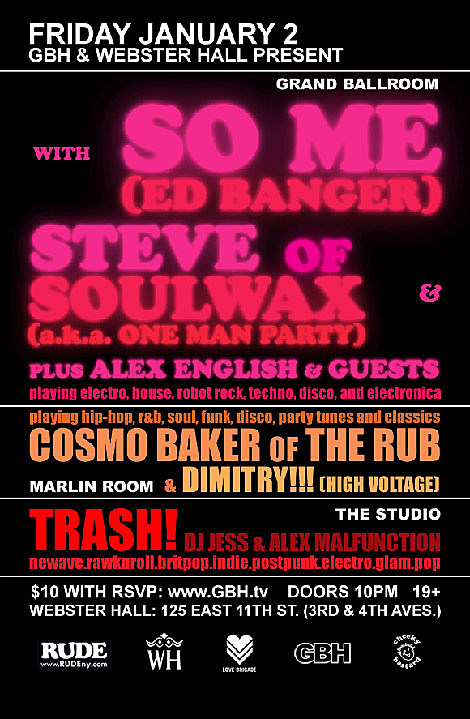 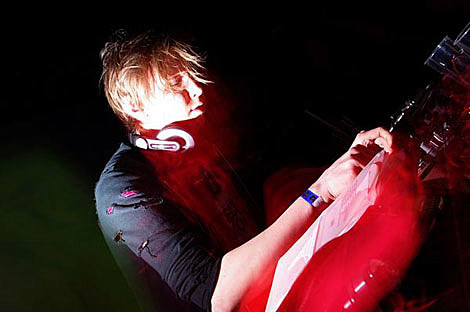 Friday night (1/2) Blende (who I was unaware of until a few days ago, despite him having remixed the likes of Klaxons, Nelson, and Dolby Anol) is deejaying Ruff Club at the Annex.

Saturday night (1/3), the super innovative, godfather/grandfather of hip-hop, Afrika Bambaataa whose sound was also very influential in electronic and dance music, is at Le Poisson Rouge. Low B whose set at Studio B last summer had me dancing, but wishing it was a mix of good electronic and hip hop, instead of essentially separate electronic and hip hop halves, is also on the bill as well as Million Dollar Mano whose remixes lean toward hip hop flavored electro (sampling "It Takes Two" on two out of the six remixes on his myspace). 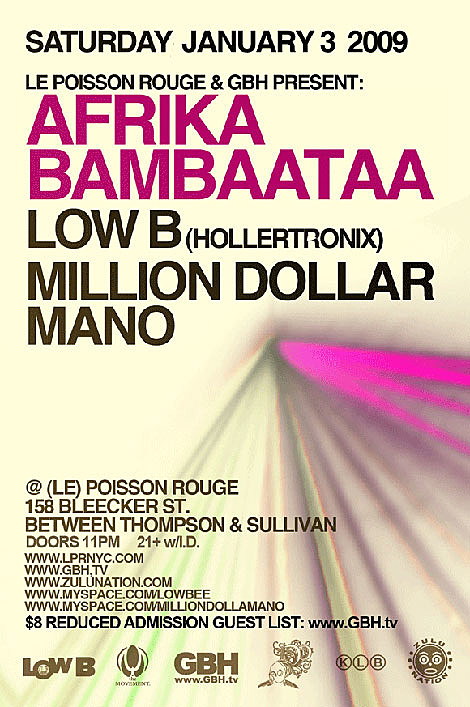 For the $8 reduced admission guest list email GBH@GBH.tv with your name and number of guests. Tell the doorperson you are on the GBH Guest List.

Also on Saturday, The Rub are at Southpaw: 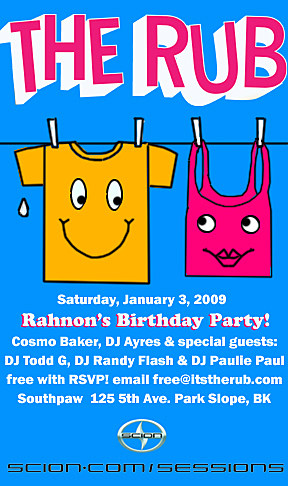 Here are a few things coming up next week:

Wednesday (1/7)
- Louie Vega and Kevin Hedge (Blaze Imprints) are at Cielo.
- Kiss & Tell: Synth Pop Guilty Pleasures with special guest John Selway at Rose Bar.
- Meanred is helping Theophilus London celebrate the release of his Ultraviolet/Ultraviolent Mixtape at the Studio at Webster Hall. He'll be performing some of his songs that are a fusion of hip hop, soul, new wave, & pop along with a live band, plus deejay sets from Melo-X, and DJ Will Gates. Check out Theophilus' track "Departure" which features him singing over Air's "Le Soleil Est Près de Moi". 9pm doors. Free with RSVP here.

During the holidays I was online a lot less and many of you probably were too. Around the same time many artists and labels gave away tracks and mixes. Download a few of them at the top of this post and also check Muscles' myspace for a new track and the Chemical Brothers' myspace for a special New Years' Eve edition of "Midnight Madness". Have a great start to 2009!