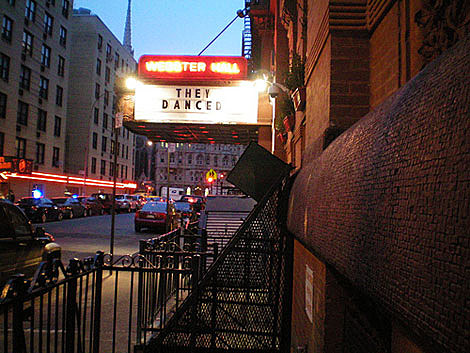 This past weekend was infinitely better than the anticlimactic one the weekend prior. Friday night JDH & Dave P warmed up the crowd at Webster Hall with some good, current dance jams. Following that the crowd seemed a bit jarred by Lovelock's more mellow, slow building set, but by the end everyone had eased into it and was more than ready for the heavily 80's tinged French freak-out that followed thanks to the rest of the Valerie Collective: College, Anoraak, and Russ Chimes. Each of their sets had their own little nuances, but I had no idea who was deejaying when (though I've since confirmed the order listed above is the one in which they went on). Suffice to say...everyone's set was good, danceable, 80's yet modern, and definitely a pleasant change from what's been making the blog rounds lately in terms of dance music.

Last weekend is going to be very hard to top (and I haven't even told you how awesome Saturday night was yet), but there are a lot of both new and familiar faces in town. Someone's bound to make you happy on the dancefloor. Here are some possibilities starting with Thursday (1/29) & Friday (1/30):

Thursday night (1/29) Fixed is back at the B (which apparently isn't going anywhere). Expect a night of great Norwegian space disco from Lindstrom and an always great mix of super current tunes from JDH & Dave P: 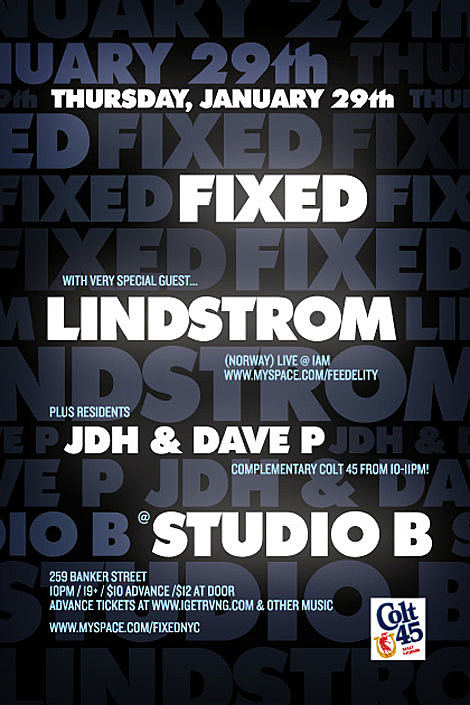 Friday (1/30)night there are two acts in New York that I'm really looking forward to. One is Evil Nine, who will be deejaying at Sullivan Room:

Don't be surprised if Brighton based Evil Nine and their forthcoming album They Live! does for zombies what Daft Punk did for robots. With stomping electro drums, '80s Italian horror-movie synths, dirty punk basslines, and a wanton disregard for genre rules, the infamously subversive dance/electronic duo create an unstoppable soundtrack for the new virtual zombie revolution.

I don't know if I'd throw out any Daft Punk references just yet, but the pair do have something interesting going on They Live (out February 24th). While I still need to give their album a few more listens, one thing I found instantly accessible and awesome is a mix they did which you can download at the top of this post (as well as a couple of other tracks). It hooked me right away (partially due to their inclusion of the Fake Blood remix of Underworld's "Ring Road" a few tracks in). The mix also put me in an excellent mood on my way to work (which is nearly impossible), and even had me liking a Presets track ("Kicking & Screaming"). Check it out and stop by Sullivan Room for what will hopefully be an equally catchy dj set from the duo: 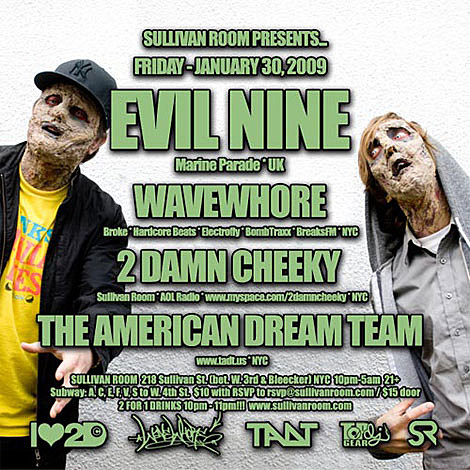 Another new act in town on Friday that I'm really looking forward to seeing: The Golden Filter. A couple of friends brought them up in conversation on Sunday and I've been reading about them everywhere ever since. They're disco/housey/poppy dance bliss that I really hope translates well live at Le Poisson Rouge (and also a few months down the road when they open all the shows on the Presets North American tour): 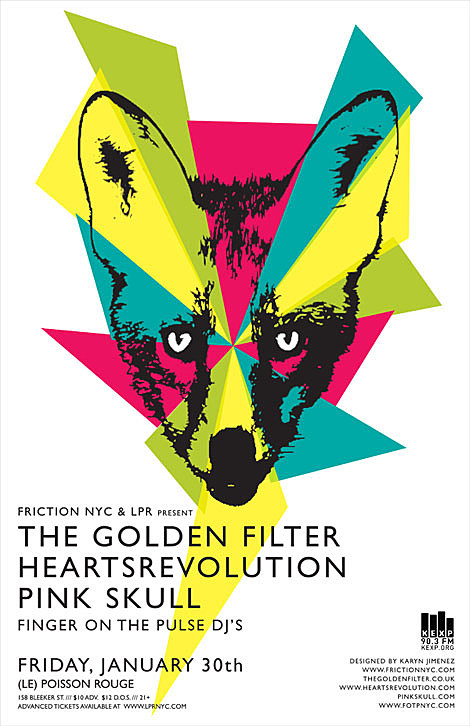 There are also a couple of great techno deejays around Friday night. Kevin Saunderson (the godfather of techno) is deejaying at Webster Hall:

Free before 11pm / $5 before midnight / $10 after -
On the GBH Guest List
Email: Event@gbh.tv with your name & number of guests. When you arrive, tell the doorperson you are on the GBH guest list. 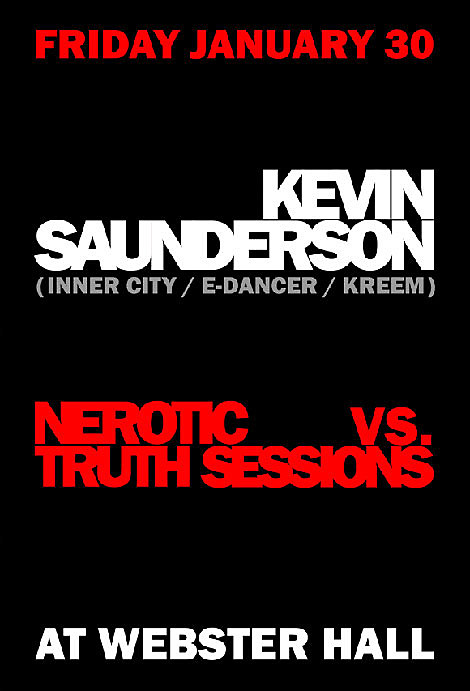 Eamon Harkin & Justin Carter take a break from their successful new Saturday party to keep things going with Primetime, their monthly with James F!@.$%^ Friedman happening this Friday at Love. The guest dj is another techno dj - Stacey Pullen who will be

Bringing the heat on the dancefloor and making you body move to the groove.

Check out of the rest of Eamon's interview with Stacey here. There's also a mix you can download at the top of this post. 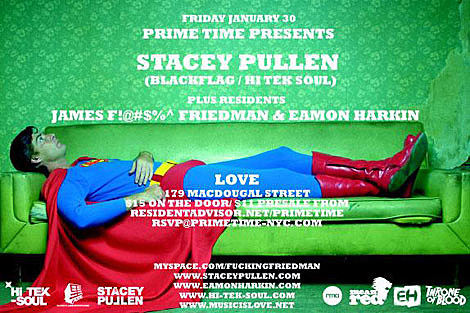 Frankie Bones takes things back a few years with Factory at Studio B: 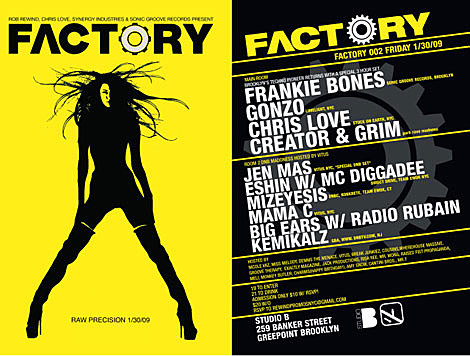 Dave Dresden is at Cielo: 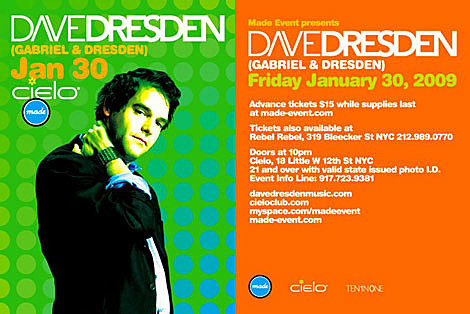 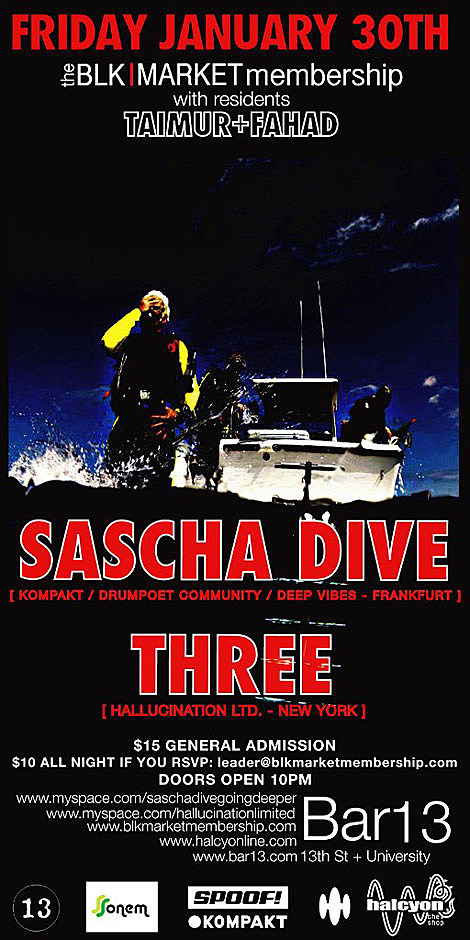 As always, there's more dancing to be done Saturday heading into next week. More info on that soon, plus reviews of Modeselektor's Bowery show and Mr. Saturday Night with Tortured Soul at Santos!