Last week in dance wound up being a lot of fun. Friday night I went to see Little Boots at Studio B. I arrived sometime around midnight and was shocked at how packed the floor was by the time she went on around 1:15. Despite her set being good, especially her cover of Giorgio Moroder's "Love Kills", and including everything I expected after seeing her at CMJ, overall I wasn't as engaged by her performance this time around. It was just me though. Everyone in the place was bugging out and there really wasn't any good reason not to. As brief as her set was, the late start (she was originally scheduled to perform at 12) derailed the entire rest of the night and I ended up missing both One Man Party and Danger at Webster Hall. A friend there texted me highlights of One Man Party's set which read like a more intensely awesome mix of the Soulwax/2ManyDJ's remixes and current electro that he played at Webster last month. As great as it sounded, the regret really hit when I watched the following video of the beginning of Danger's set which started with "Ave Maria" and went into a great live version of "9h20":

I didn't end the weekend on a regretful note...Saturday night I could feel the urge to stay in pulling at me, so I left my apartment as soon as I could to see Matthew Herbert at Studio B. Essentially, removed from some very limited exposure to his solo work, all I had heard of Matthew Herbert, specifically his dj sets, was that they were weird and all over the place, but good. As vague as it seems, that description wound up being right on. His set started off for lack of a better word, weird, and very quickly got crunchy and danceable, ending hours later on a lovely, melodic, disco note.

Two of the best things about his set:

1. The only song I was able to recognize was "Percolator" by Green Velvet, and
2. He played records! It was a truly refreshing dancefloor experience that I was really glad I didn't miss. 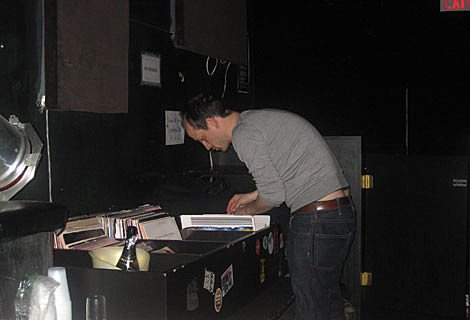 Speaking of things you won't want to miss, the weekend approaching is looking awesome once again, including Friday the 13th, Valentine's day, and a bunch of events to send you straight into next week (3 day weekend anyone?!). Here's what's up starting with Friday:

If you want to get your evening started early, Brooklyn's own Streetlab will be doing a free in-store performance at the Soho Apple Store at 7pm.

From there you could head to Webster Hall for an early party happening in the Studio. Michna will be performing with his live band, Raw Paw, plus Woodhands (who you can learn more about, as well as snag some tunes from Bill's post), and Red Wire Black Wire: 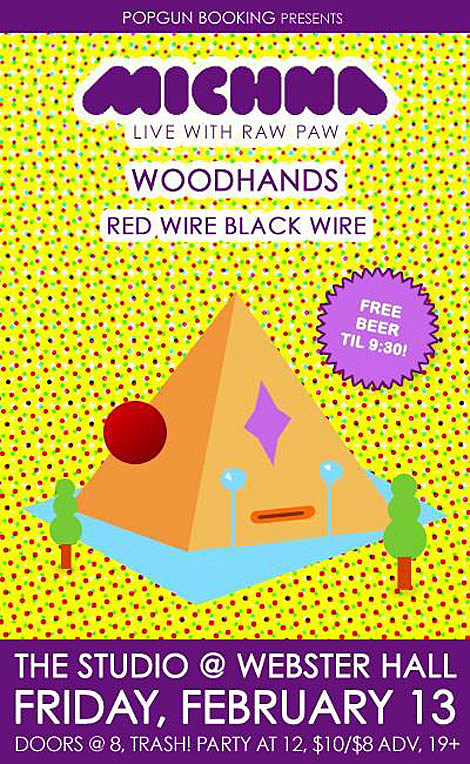 Also, beginning around the same time (9pm) the awesome monthly museum dance party, One Step Beyond is back at the American Museum of Natural History with another great line-up: Dave Nada (who threw down a great set when I saw him deejay as half of "Nadastrom" back in December) and Brooklyn's own dj trio, the Rub. We also have 2 pairs of tickets to give away!

TO WIN A PAIR OF TICKETS TO ONE STEP BEYOND email BVCONTESTS@HOTMAIL.COM
(subject: OSB). Two winners will be chosen at random and contacted. 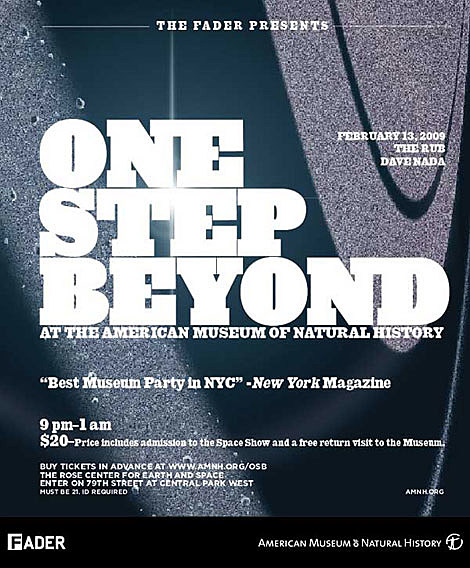 A bit later on things start to get tricky as a lot more options start popping up.

Busy P and Xavier de Rosnay (Justice) are at Webster Hall. I've witnessed a ridiculous number of great dj sets from Busy P in the last year alone, and while I'm a little less excited about Xavier's set after experiencing a not so awesome one from him last April at Le Royale...his joint set with Gaspard back in October definitely has me hopeful. 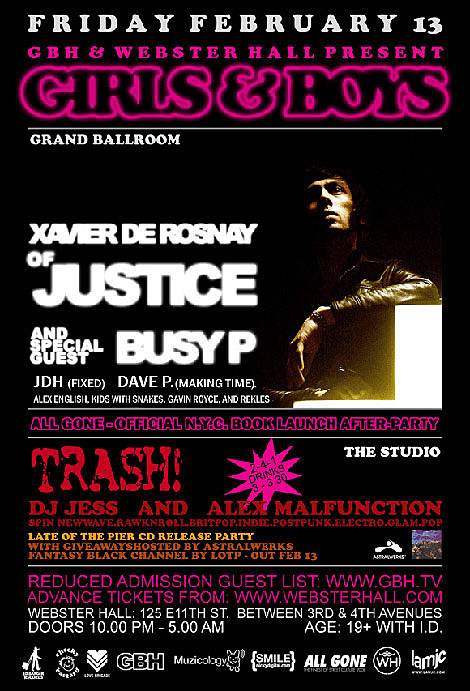 $10 reduced admission before midnight with RSVP.

Trouble & Bass are having their Valentine's Death Prom at Studio B. In addition to manning the decks themselves the T&B crew have brought in DJ Craze to guest deejay, plus there is a special surprise live act. I haven't received any official word on who it is, but a little bird told me it might include some members of a certain Brooklyn disco outfit among others...interesting enough that I am feeling some serious conflict about my initial decision to go to Webster Hall. 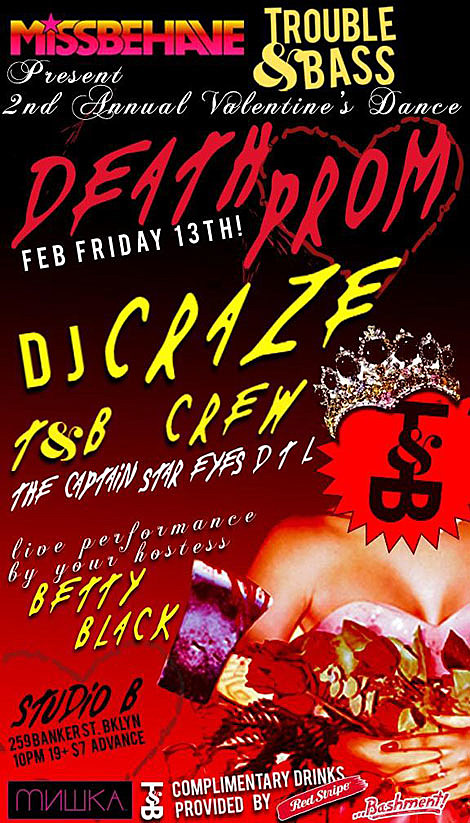 A couple of other things going on Friday night:

- Joee Irwin is at Ruff Club at the Annex. Download Joee's set from when he deejayed at GBH Radio last Wednesday here

Saturday night (Valentine's day) there are a lot of dance possibilities whether you're flying solo or with a significant other.

Firstly, Chicago's in the house with DJ Sneak and Lil Louis.

DJ Sneak is celebrating the release of his installment of NRK's Back in the Box double mix cd series, out February 23. Party info and tracklisting below. Also check out a recent interview he did with Time Out. 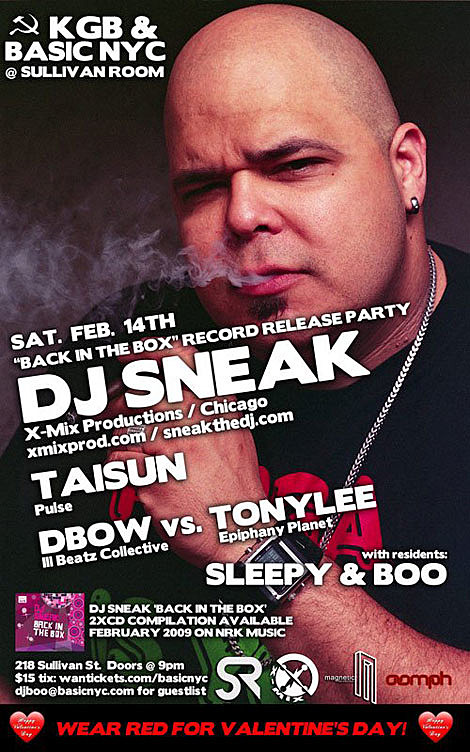 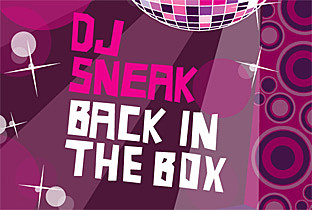 DJ Sneak - Back in the Box Tracklisting

Lil Louis is at Santos, celebrating the release of his new book "A Man's Diary" which is about his past relationships, as well as a double album Two Sides to Every Story:

...written by Lil Louis from a woman's perspective, depicting their joy, love and heartache...the perfect answer to "A Man's Diary," giving you a full pictured, unbiased, hard view from both sides of a relationship. 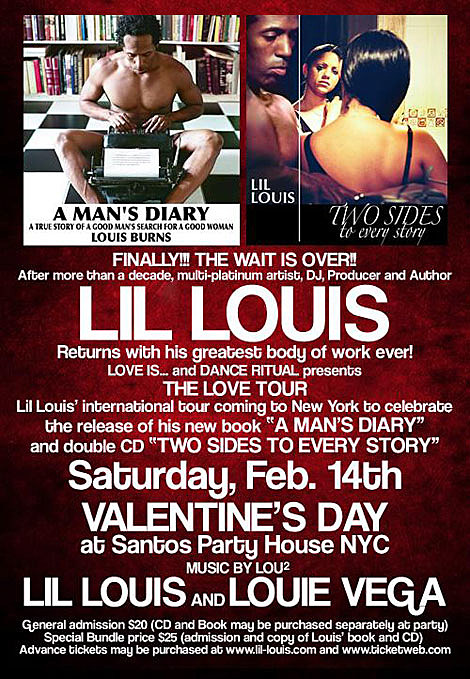 If you're having an easy view of a relationship...Ghostly is hosting An Evening of Sensual Machine Music with Lusine, Grouper, Michael Brofman (performing music by Erik Satie), and the Sight Below (whose song "At First Touch" made Radiohead's office chart last month). Advanced tickets available here, along with info on the artists, and options for just seeing the show (standing room) or making a dinner reservation as well.

If you're not feeling particularly sensual this Valentine's day, tell it to #$@K OFF! at Meanred's Valentine's Day Riot: 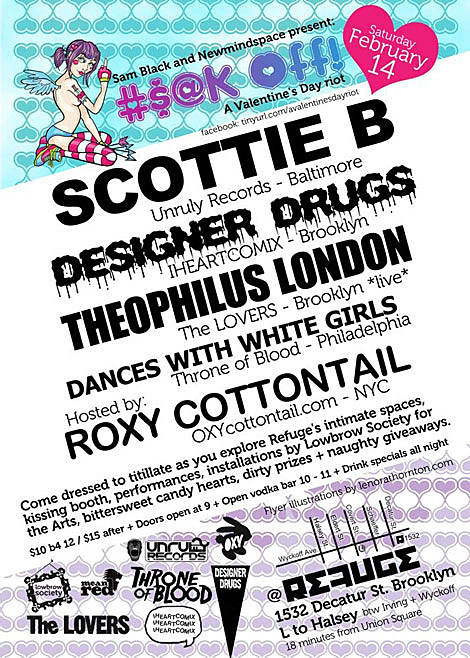 Also on Saturday:
- Thomas Melchior is at Love.
- Cassy and Anthony Parasole will Save the Cannibals at Rebel.

Heading into the beginning of an awesome 3-day weekend (for some):

Tuesday (2/17)
- Not super dancey, but still good - Fujiya & Miyagi (more tour dates here) and School of Seven Bells (more tour dates here) are at Le Poisson Rouge (School of Seven Bells was confirmed as the opener at LPR after those dates were originally posted).
- Scion is hosting another one of its excellent Tuesday parties at Plan B - this time with Rusko and Congorock! Congorock is on a mini-tour to promote his debut Fool's Gold single Runark which will be available on vinyl soon and digitally February 24th only through Turntable Lab to begin with, with others to follow. 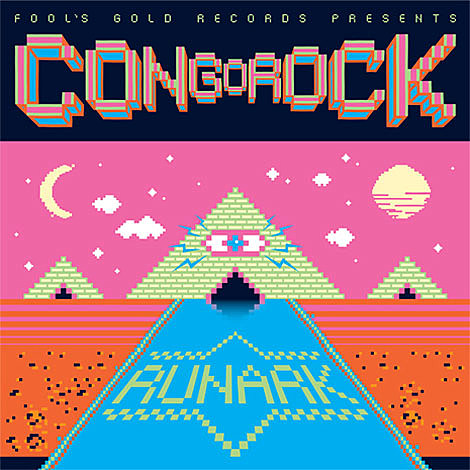 Wednesday (2/18)
- Louie Vega and Kevin Hedge (Blaze Imprints) are at Cielo.
- Sammy Bananas' Player's Club is happening at Pianos
- Jubilee is deejaying Broken Teeth at 87 Ludlow.
- Meanred is having a Dre Day celebration at Santos.
- Modular's new weekly, Downtown Downturn, continues at BEast (171 E. Broadway at Rutgers) with guest deejays My Cousin Roy and Marcos Cabral, and the Modular DJs. 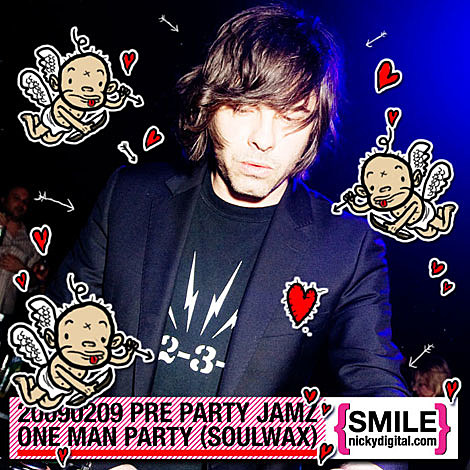 People tend to have a variety of feelings regarding Valentine's Day. Whether you love it, hate it, or think it's a stupid "Hallmark" Holiday, I highly recommend heading over to Nicky Digital to check out One Man Party's Pre Party Jamz mix.

I typed in the word "love" into my iTunes and made a selection of stuff that seemed to go well together. Quite an eclectic mix. Enjoy!