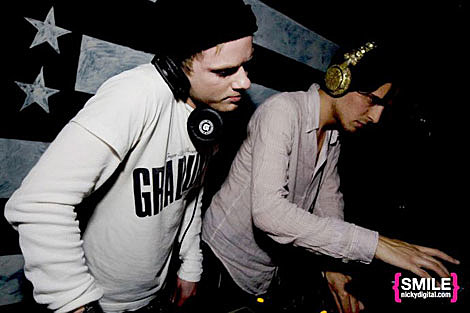 I was out of town last weekend and unfortunately missed all the awesome acts that came through New York. I managed to make it out Tuesday night for the Scion party, but was feeling tired and not too into it. You already know how I feel about Hearts Revolution and nothing about their performance on Tuesday changed that. I caught some of Classixx's set before I left, which started off with some mellow, almost loungey disco before quickly working up to some very danceable tracks from the likes of Holy Ghost, Mylo, Sebastien Tellier, Ce Ce Peniston, and Alan Braxe & Fred Falke. Tuesday night helped take the edge off, but I am really, really looking forward to a lot that's happening this weekend. Friday night (3/13) there is way too much good stuff going on.

Starting early in the evening (9pm) Four Tet & Jon Hopkins along with Mapei will be performing at One Step Beyond at the Musuem of Natural History: 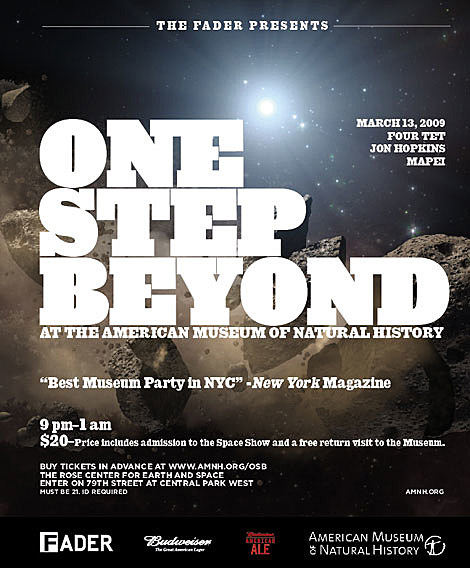 Later in the evening there's much more happening:

Calvin Harris kicks off his North American dj tour at Webster Hall. In addition to his own tracks, production work for Kylie Minogue, and numerous remixes, I've heard Calvin holds his own quite well as a deejay. On top of that, Nadastrom who were great at Studio B in December are on the bill as well! Party info, Calvin Harris North American tour dates, and video for his new single "I'm Not Alone" (available digitally starting April 5th and on CD April 13th) below: 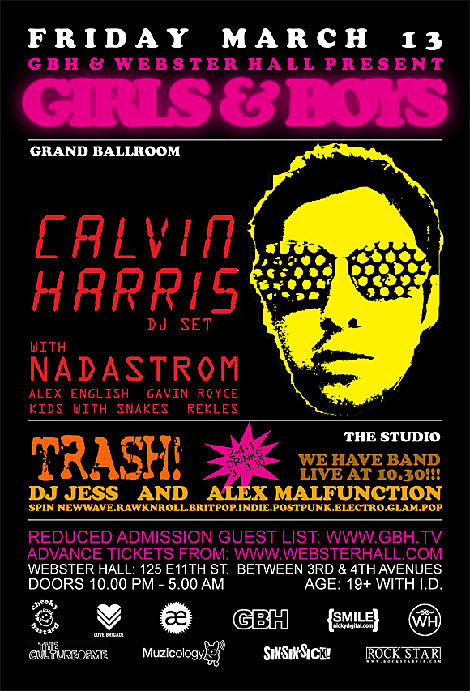 Fixed continue bringing great electronic/dance acts to New York. This week the party is at Le Poisson Rouge with 2020 Soundsystem whose live electronic performance at Studio B in December (which you can download a recording of here) was a great live techno experience. Dominique Keegan (Plant Music) will be doing guest vocals again and removed from his performance with the band, Ralph Lawson (2020 Vision) will be doing a separate dj set. Download some tracks by 2020 at the top of this post. 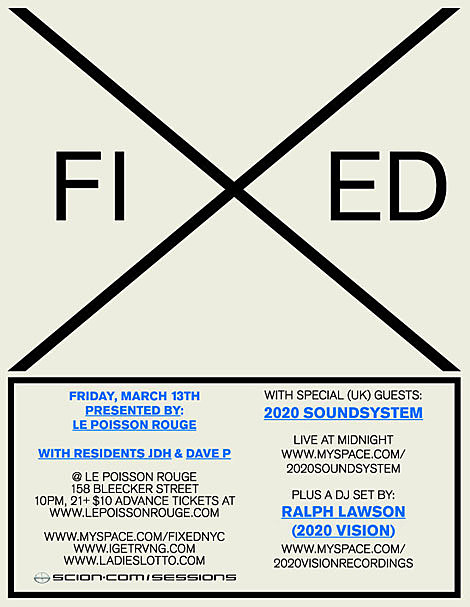 Meanwhile, in Brooklyn Trouble & Bass will be throwing quite a party of their own at Studio B. The line-up looks great. The excellent, French, teenage beatmaker, Bobmo will be keeping things fresh and housey, plus fellow Institubes labelmate Das Glow is finally back in New York (I don't think he's deejayed here since May 2007's People Don't Dance No More!). On top of that Jack Beats will be making both their US and New York debut! The Trouble & Bass crew will be deejaying as well, including their newest member AC Slater! Download AC's new track "Rock It Out" at the top of this post and check out his entire EP, which was just released by Nightshifters on the 10th, on Beatport . 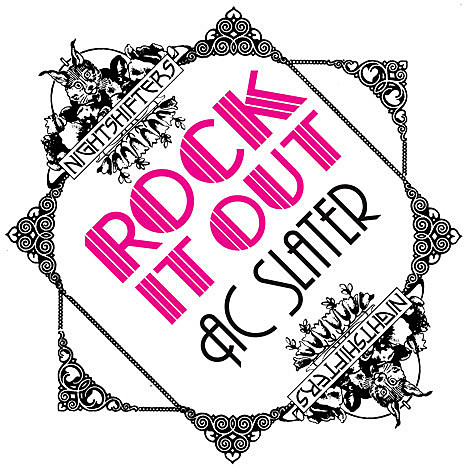 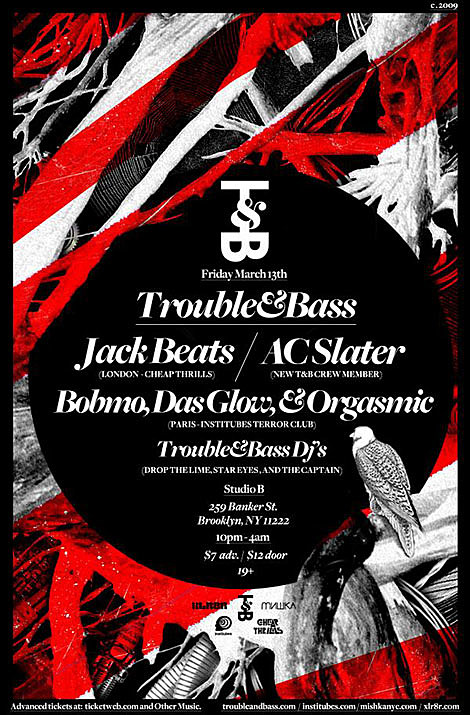 More happening Friday:
- People Don't Dance No More is happening at Trophy Bar.
- The Bunker is happening at Public Assembly.
- Turntables on the Hudson is happening at Cielo.
- Mattie Safer is deejaying Ruff Club at the Annex.
- Palms Out is celebrating Chaz Requina's Birthday at Le Royale.

Saturday night (3/14) A-Trak's Infinity+1 tour makes its New York stop at Studio B. The tour is in support of A-trak's Infinity +1 official mix album, which is out March 31st on Fool's Gold (tracklisting below). There's a website counting down to the release which features a new download, video, or contest every day, which is definitely worth checking out. In addition to A-trak, fellow Fool's Gold head Nick Catchdubs is deejaying, plus one of my favorite Ed Bangers, the super happy, animated mix master DJ Mehdi. DJ Mehdi just interviewed A-trak and it's pretty funny as well as informative. Infinity +1 album tracklisting below, along with tour dates, and info on the party at Studio B:

I don't think I've seen any of the Dirtybird crew since their excellent monthly series at APT back in '07. As good as the artists on Dirtybird are I don't listen to their music that often, but always try to see them when they are in town. Their deejay sets are excellent - loud, deep, and wobbly. Definitely check them out if you haven't seen them before:

Also on Saturday...Peaches is on tour. So is Violens. They're playing at a party at the Tribeca Grand with So Me who I'm not the biggest fan of seeing behind the decks (but if you are he's also going to be at Le Royale on SUNDAY). I like his graphic design though...and his blog.

FREE WITH RSVP. Email tribecagrand@GBH.tv with your name and number of guests.When you arrive, tell the door person you are on the GBH Guest List.DUE TO LIMITED SPACE, GUEST LIST SPOTS ARE LIMITED TO TWO PER PERSON.PLEASE RSVP FOR YOU PLUS ONE GUEST ONLY.

Heading into next week... 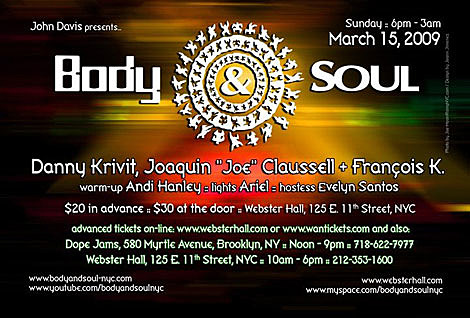 Monday (3/16)
- Francois K is deejaying the entire night at Deep Space at Cielo. Deep Space schedule for March below: 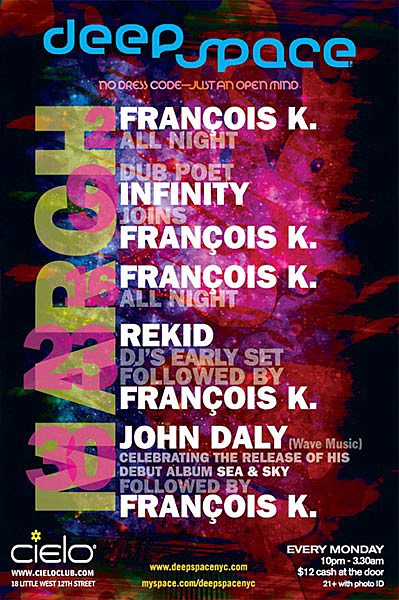 Wednesday (3/18)
- Louie Vega is at Cielo. Special guests for that night & the rest of March below: 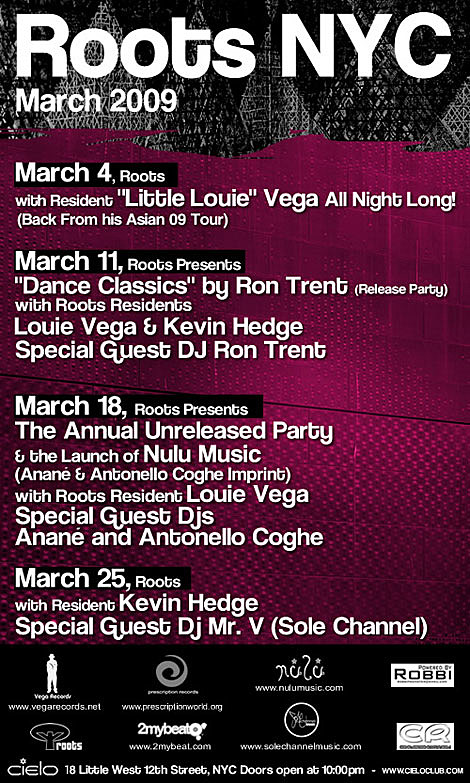 There are a lot of great deejays and electronic acts headed to New York on their way to/from SXSW, WMC, and Coachella but the one that I am possibly looking forward to seeing the most is Simian Mobile Disco at Highline Ballroom on April 23rd. Their live show is awesome, but after seeing it numerous times I've been hoping to see and hear something new from them for a while. From the looks of things we should be in luck. Last month SMD released a video for their new track, "Synthesize" and they recently followed up with a video for their latest track "10,000 Horses Can't Be Wrong":