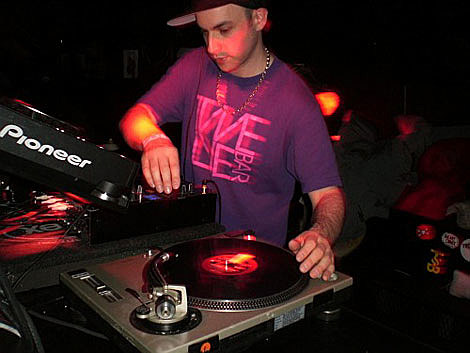 Studio B saw a lot of excitement this past weekend. Friday night it was more packed than I've seen it in a long time with everyone getting down to the dubstep/heavy bass/French sandwich of beats delivered by Trouble & Bass vs. the Institubes Terror Club. Bobmo had people moving with his 90's tinged housey French goodness. A.C. Slater proved a great addition to the T&B crew, working the crowd with a set that was both dancey and full of bass. Everyone went bananas when he dropped "Rock It Out"...someone even crowd-surfed. Jack Beats made a great New York & US debut with his UK flavored mix that was heavy on the bass, a little dubsteppy, and pleasantly unpredictable (a Phoenix remix?!). He also held it down behind the decks for much longer than anticipated when Das Glow temporarily had gone missing. When Das reappeared, he quickly made up for his absence seamlessly steering the predominantly bass heavy evening into a more mild, but still very danceable, French direction.

Saturday night things only got better. It was only around 12 and the B was already packed with people dancing to a set from Nick Catchdubs. Just shy of an hour later A-trak & DJ Mehdi hit the stage and together treated the crowd to over 3 hours of awesome dance music. They played tons of new stuff and great older stuff, along with some surprises. A-trak & Mehdi were excited and that energy transferred to the crowd making Saturday night's one of the most fun, upbeat, and awesome deejay sets of '09. Check out some of the great footage Electrodrone took at the party. It really captures the vibe and electricity of the crowd, not to mention some great tracks. Here's one of A-trak & DJ Mehdi dropping "Show Me Love", and there are a few more here:

Hopefully that got you excited for this weekend because there are plenty of great dance events going on.

Friday night (3/20), Trus'me, the UK-based deejay behind APT's recent monthly Disco3000 party, touches down to treat the crowd to a 5 hour set with music from

...all corners of the record shop form the past, present and of course the future.

.The party info is below. Get ready and stream a set Trus'me recently did on Compost Radio. Also, in case you missed them, you can download a set from Trus'me on Beats In Space here and a live set from when he deejayed Sunday Best at the Yard at the top of this post. PS - He's one of the first 28 performers announced for Montreal's 10th Mutek festival! 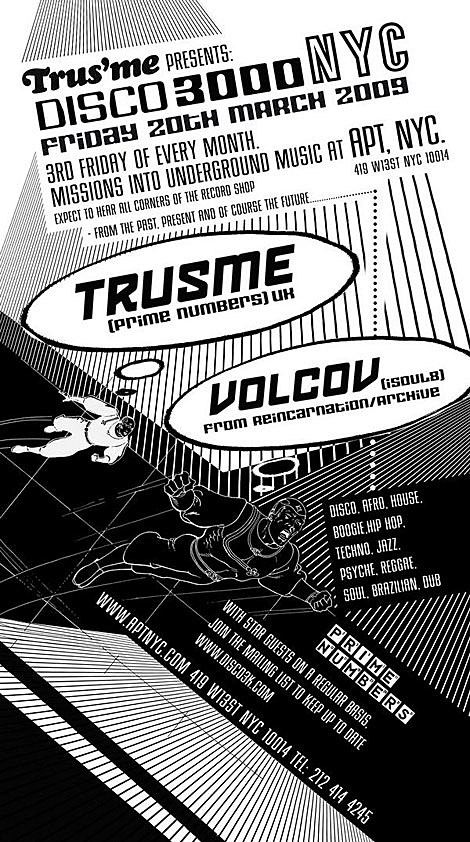 If you're in the mood for some more modern disco sounds self-titled is hosting the second party in their Oscillations series, feeaturing DJ sets from:
The Glimmers, Liv Spencer, James F!@#$%^ Friedman (Throne of Blood/Prime Time), and Benjamin Roeder, plus a live set from Cubic Zirconia at midnight at Studio B. You can read more about the line-up & listen to some of their music here. 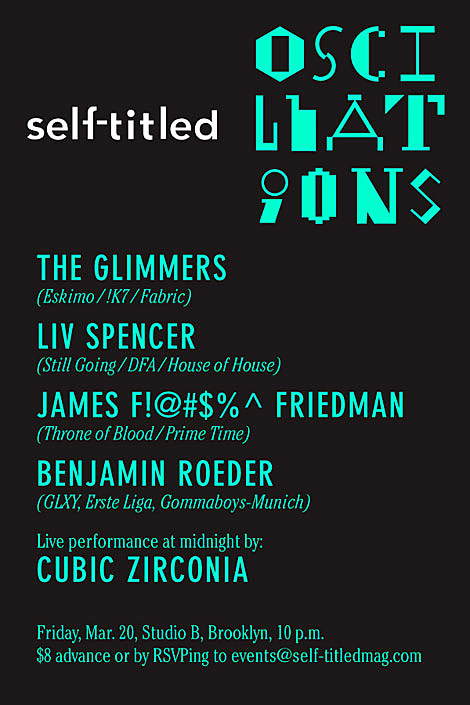 For something a bit more electro/techno/German, head to Webster Hall where Boys Noize will be deejaying & hosting Boys Noize Records night with some of his label's artists. I have mixed feelings about D.I.M.'s sets at this point, but Shadow Dancer look promising. Check out the very extensive 42-track podcast they did for XLR8R. 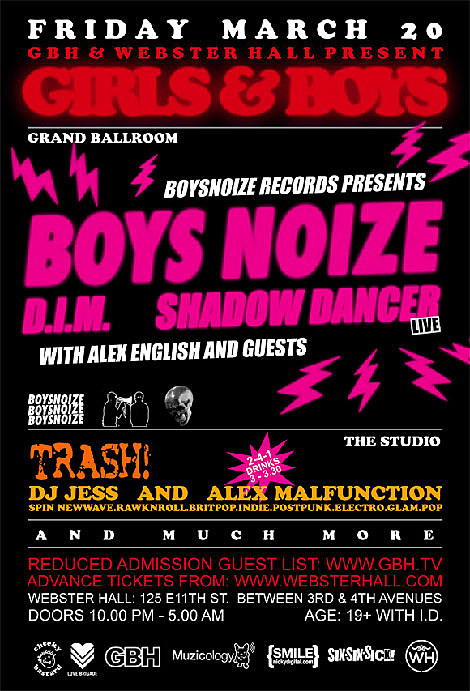 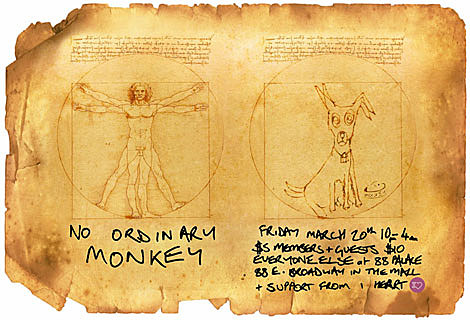 Early Saturday evening (3/21) melodic, Australian, electro-rock band Cut Copy who were around quite a bit in '08 are ending of all their stateside cruising on this 2009 tour with Matt & Kim. Hopefully you were able to get a ticket for their SOLD OUT show at Terminal 5. If not there are plenty of other reasons to be happy and get down Saturday night:

The next logical step would be the Cut Copy official after-show-party at Le Poisson Rouge featuring Cut Copy's only dj set on this tour, plus excellent New York disco duo, Holy Ghost as well as Knightlife. 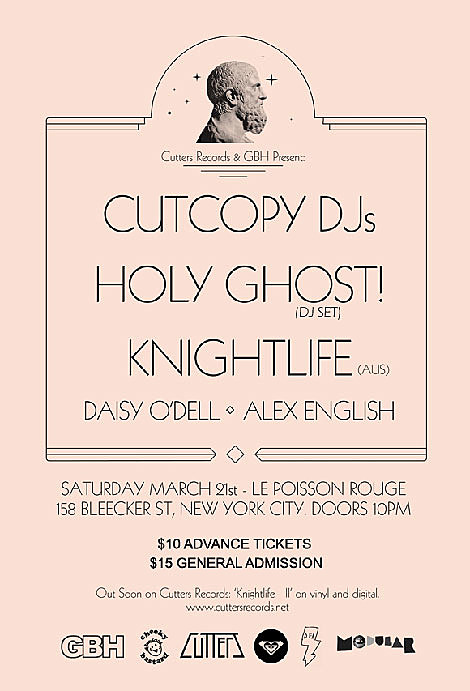 Don't make that decision too hastily though. Ewan Pearson who played a great set at the B in November is returning to New York. This time he's partying at Santos with Mister Saturday Night, plus special guests Todd Terry and Phonica boss Simon Rigg.

The residents (Eamon Harkin & Justin Carter) will be there too. Download Eamon's set recorded at February 28th's Mr. Saturday Night at the top of this post, with more to come on the soon-to-be-launched Mr. Saturday Night website (tracklisting here). Also, more good news from Mr. Saturday Night: the party is now going to be weekly!!

In celebration there's a special $10 reduced list if you RSVP to: mister@mistersaturdaynight.com. 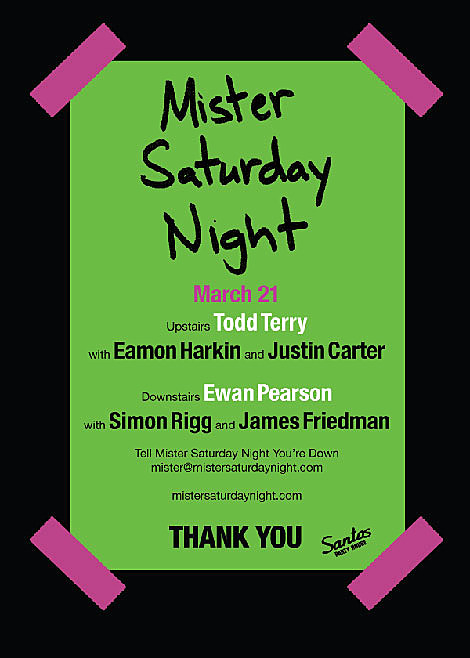 Also on Saturday
- Fixed is back at Studio B with Sascha Funke: 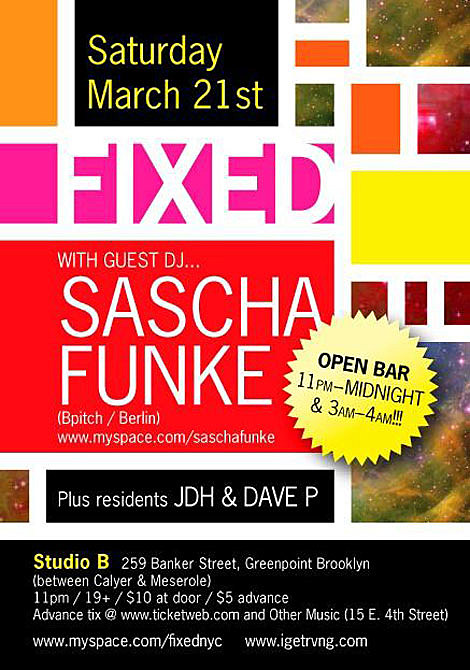 - DJ Hell is here for the first time in 4 years! He's touring in support of his new double album Teufelswerk, out April 27 on International Deejay Gigolo Records. The album is split into "Night" and "Day":

The nocturnal side offers a contemporary interpretation of Chicago house and Detroit techno. Its sunnier sister disc finds Hell embracing the rich cosmic groove of his roots. 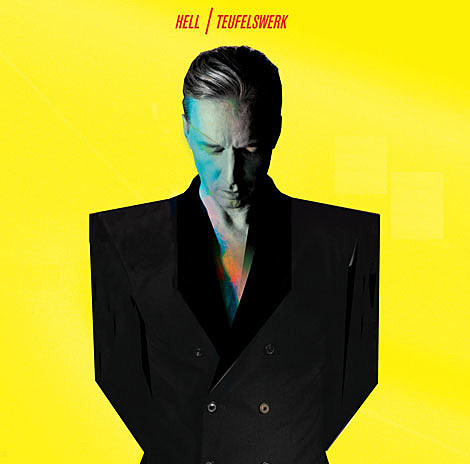 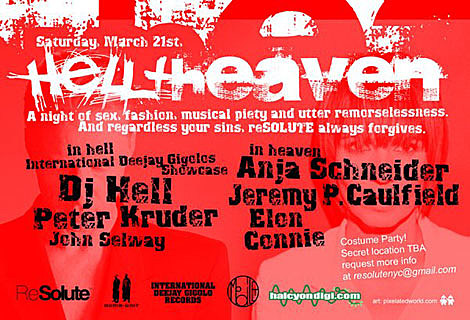 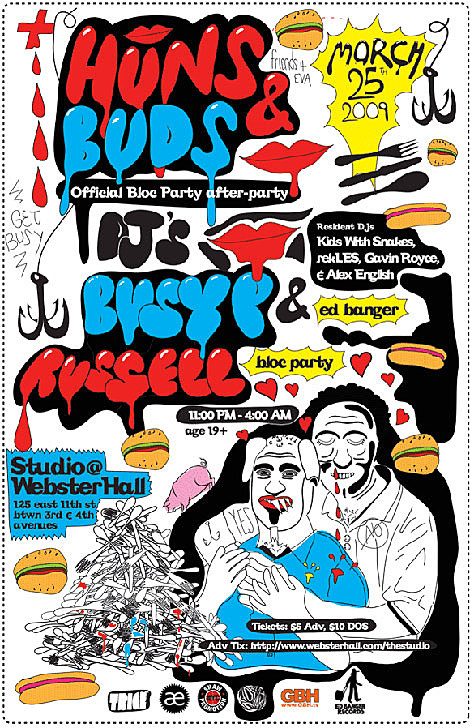 - Kevin Hedge (Blaze Imprints) is at Cielo along with special guest Mr. V.
- Eight Below, is happening at 152 Orchard.
- Modular's new weekly, Downtown Downturn, continues at BEast (171 E. Broadway at Rutgers). This week's is hosted by the Pop Manifesto.
- 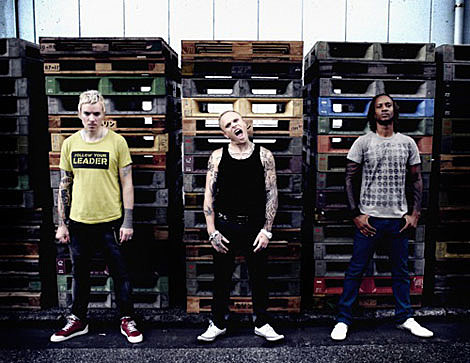 There are a lot of good things headed our way for the end of next week. One that I'm very excited about is the Prodigy show at Roseland (tix). The group hasn't played New York since 2006 and is in the midst of a pretty big 2009 tour to promote their new release Invaders Must Die which was just released on Take Me To The Hospital/Cooking Vinyl on March 3rd. Check out the videos for their new tracks "Invaders Must Die" and especially "Omen" which features a lot of live show footage, over at the Prodigy Channel and get ready for Thursday's show!