This weekend saw the first wave of post-SXSW, pre-WMC deejays and bands come through New York. There were a lot of events lined up that I had seen coming for weeks, but one that somehow got by me until just a few days before, was Disco 3000 with Trus'me and Volcov at APT. Without enough time to sway my more "electro"-minded friends to change their plans, I hit APT solo Friday night and left without an ounce of regret. Upon arriving around 12:30 or so, the basement space was packed with people dancing. While there were some weird and inexplicable ebbs & flows in terms of dancefloor traffic, the music was on point the entire night. Trus'me and Volcov traded off deck duty every hour or so, easily meeting the expectations garnered from the flyer:

Expect to hear all corners of the record shop from the past, present and of course the future. Disco, afro, house, boogie, hip hop, techno, jazz, psyche, reggae, soul, brazilian, dub.

Overall it was a great night that had me out dancing until 4, never even toying with the idea of leaving earlier. It also reminded me just how much I love disco, house, etc. After inadvertently laying those genres by the wayside of more electro-oriented sounds for too long, I have not been able to get enough of them since Friday.

Saturday night I ventured out again, to Terminal 5 to see Cut Copy. I managed to catch a bit of Knightlife's opening dj set which was very well-mixed and balanced, including tracks that were on the more melodic, French house side of things with a tasteful amount of more gritty/synthy electro thrown in. 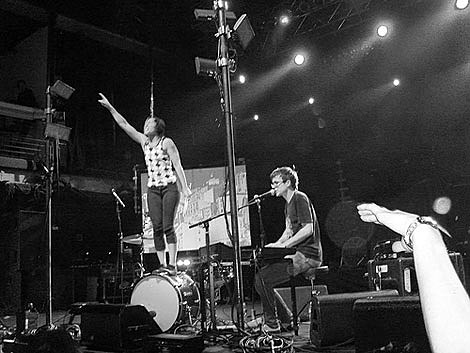 Following Knightlife, Matt & Kim went on. I had seen them open for Professor Murder at Bowery a few years ago and really didn't like them. This time around, despite still not really being into their music, I found their set to be much more entertaining in terms of something to watch. The pair really didn't let the crowd that was standing idly for the first couple of songs get to them. If anything it made Matt & Kim try even harder to get everyone excited. It inevitably worked after a few more songs and some witty banter. By the end, the crowd was very into it. People were jumping and dancing along to the upbeat synth & drum combos, which ended with the previously indifferent crowd, now embracing and ushering Matt to the safety of the stage after his attempt to literally walk on top of them failed.

The tension built as the crew readied the stage for Cut Copy's set...unfortunately, so did the crowd. Just minutes prior to the beginning of the show I realized the floor was so packed I could not lift my arms and it began to dawn on me how hellish the next hour or so might possibly be.

For the most part, it was. Dancing had gone from being the fun, point of the evening, to a battle for personal space. Cut Copy were in top form, as they have been every time I've seen them prior, but the crowd made it difficult to enjoy their set.

In terms of what they played, it was mainly favorites from their albums In Ghost Colours and Bright Like Neon Love, plus the addition of the track "Sands of Time" (recorded at the same time as In Ghost Colours, but never making it onto the album) which sounded amazing live. Thankfully there were just enough brief moments where I found myself with sufficient space to get down and enjoy the music, making me able to walk away from the show feeling good about it (despite the hellish crowd).

Hopefully the positivity will continue into this week. By the looks of what's headed our way, I'm optimistic:

As I highlighted at the end of last week's post, legendary UK electronic group, the Prodigy are in town for the first time in over 2 years. I haven't seen them before, but based on a few firsthand accounts and some recent live footage I'm expecting dancefloor mayhem. Plus, Busy P will be deejaying beforehand to ease everyone into it.

If you want something a little less in your face, Friendly Fires are a great, upbeat, electronic-tinged live band who are playing the Bowery Thursday & Friday night (on tour with the Soft Pack and White Lies). Their performances have been consistently awesome and energetic the past four times I've seen them since October. Despite seeing them that many times I am still feeling some regret about missing both of their shows this week. Each night is sold out, but I really recommend trying to get a ticket!

Both the Prodigy and Thursday night's Friendly Fires show have after-parties. Info on each below:

The Prodigy after-party is happening at the Blender Theater: 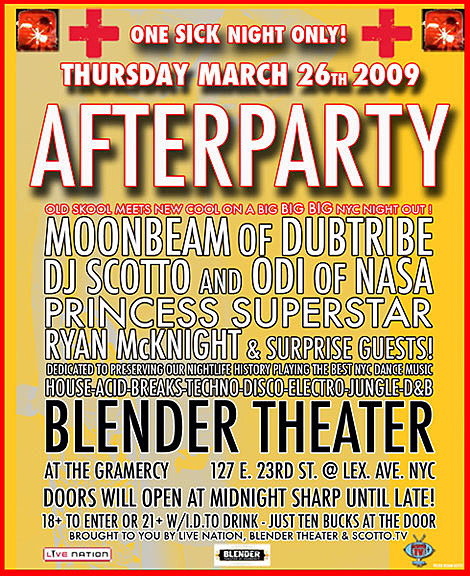 The Friendly Fires after-party is happening at the Tribeca Grand:

GrandLife Presents
FRIENDLY FIRES vs WHITE LIES
The After Party

For an idea of what a dj set from Friendly Fires might be like, check out the tracklisting from when they took over Zane Lowe's show on Radio 1 back in January here. 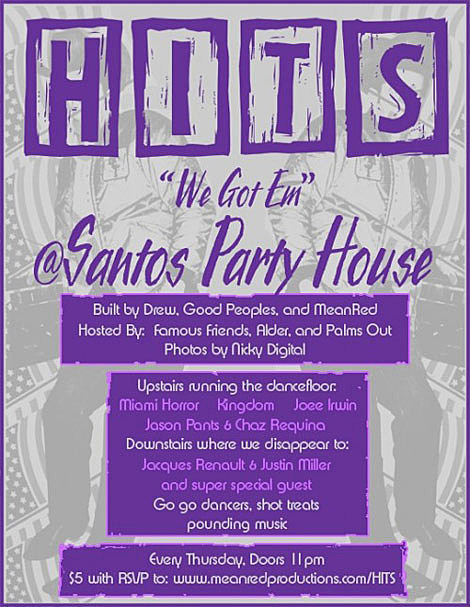 There's also some new disco going down at Studio B from Holy Ghost, and My Cousin Roy , plus a live performance from
Ladyhawke who sounds like she knew what she was doing at SXSW and at Bowery. 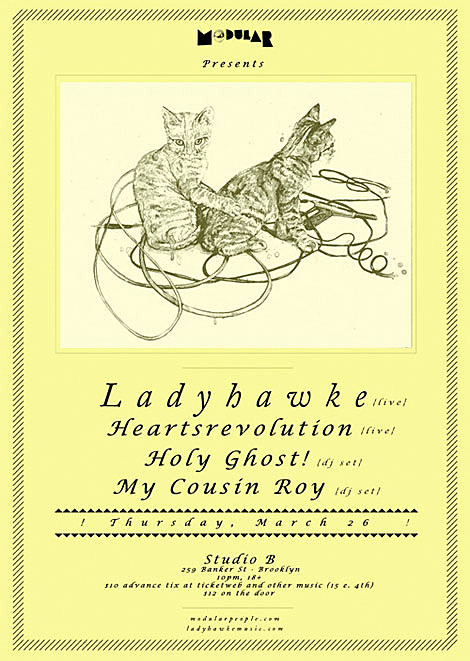 Advanced tickets available here. There's also a special 3-day ticket available that will get you into Thursday, Friday, and Saturday's shows at Studio B for $30.

which brings us to Friday...

As I mentioned above, you can try to get a ticket to the sold-out Friendly Fires show at Bowery Ballroom. There is an after-party which features them deejaying Friday night along with Designer Drugs at Webster Hall: 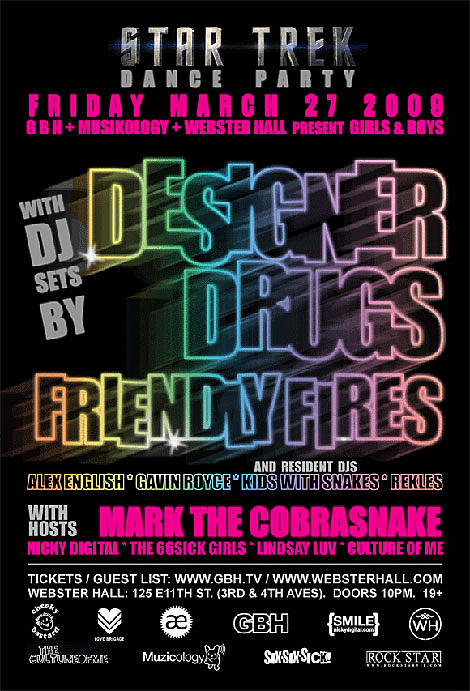 Free before 11 with RSVP.

Ellen Allien, Thomas Muller, and Gui Boratto (live) are stopping at Studio B on the "10 Years of BPitch" tour which you can read more about, along with some of the label's happenings here 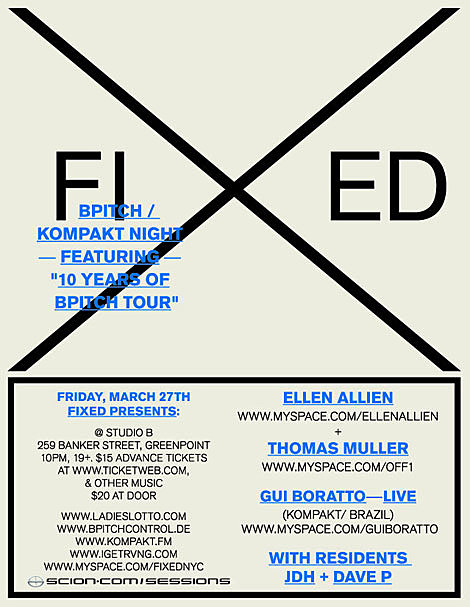 Advanced tickets for Friday's show available here or you can get a 3-day ticket for the events happening Thursday - Saturday at Studio B.

Also on Friday night - live techno outfit, Booka Shade are at the Fillmore at Irving Plaza (tix). Booka Shade have always been a bit of an enigma for me, as I've had countless people tell me that I will love them, but upon listening I've just felt kind of "eh" about them. I finally put some more effort into it, watched & listened to some of their live stuff...and am now looking forward to Friday's show very much.

On top of that, I was pleasantly surprised to just discover that Brooklyn's own excellent live house band Tortured Soul will be the opening act! Their new, sophomore album Did You Miss Me just came out on March 24th on the band's own newly formed label, TSTC Records. Download the track "Did You Miss Me" at the top of this post, and if you want to hear the rest there's a listening party at Deity happening on Thursday(3/26 from 7pm - 10pm, no cover). 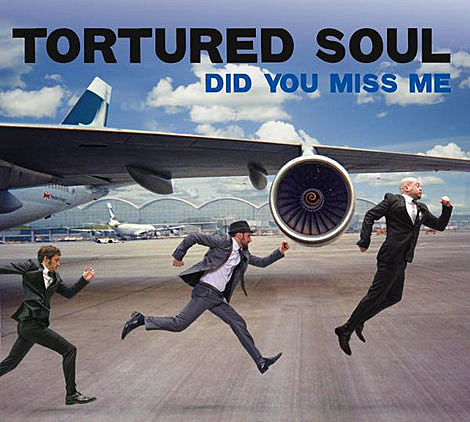 I leave you with one final option for Friday (New Release presents Henrik Schwarz (live), Ame, The Chap, and Eamon Harkin at Le Poisson Rouge), but try to save up some dancing energy for what's in store for Saturday, heading into next week in Part 2 of the Week In Dance! 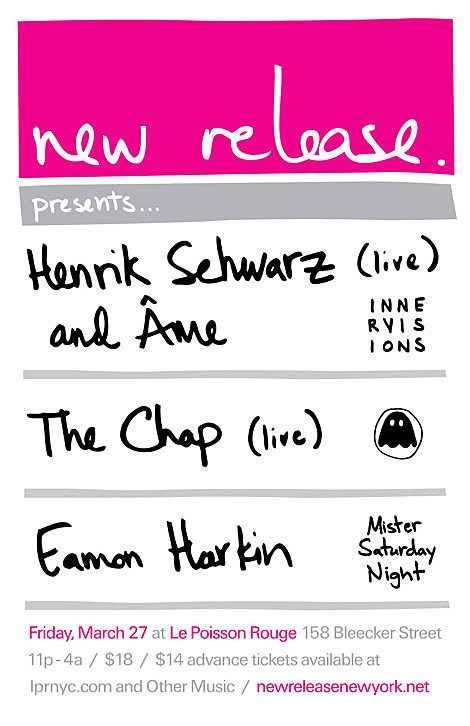 Saturday and the rest of the week coming soon...