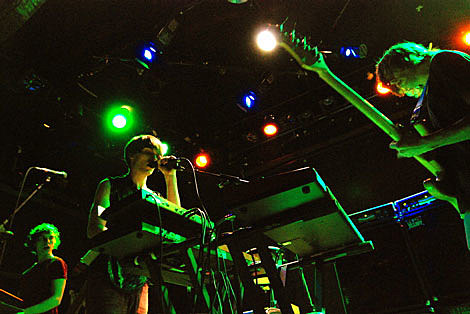 Last week in dance was pretty awesome...Busy P on Wesnesday, Busy P and the Prodigy on Thursday. I went into Friday night perhaps a bit too optimistic about the weekend continuing in the same direction. Right before Tortured Soul's set at Irving Plaza I was yawning non-stop, but figured I'd perk up once they started. Their set was good and playing was tight which I've come to expect from them. The crowd, which was a bit sparse at first, really filled in and was getting into their set by the end. I was into it too...but not nearly as much as usual, which is when it started to dawn on me just how tired I was.

Despite that I was still optimistic about Booka Shade. If there's anything that can give you a good second wind, it's some live dance music. They started...they were energetic and enthusiastic...but I just wasn't connecting with the music at all. Everyone else I was with was though.

While I'm sure being tired had a lot to do with it, I think it was also something I've only just recently started to realize: I only like certain kinds of techno (and I'm not exactly sure what they are yet). Another thing that started to work against Booka Shade about halfway through the show - they started to remind me of Royksopp...but a much more German, techno-ey, comparatively minimal, less lively version. This was mainly due to their physical set-up, gear, etc. (plus seeing the Norwegian duo tear up Irving Plaza two times over the past 6 years didn't help either). Not to add to the excuses...but I was also still coming down from the Prodigy mayhem of the night before, and have been on a disco bender since Disco 3000 with Trus'me & Volcov the weekend before... that making me wish Booka Shade had a traditional vs. electronic drum kit. I guess in the end...what I'm trying to say is, Booka Shade...it's not you, it's me. 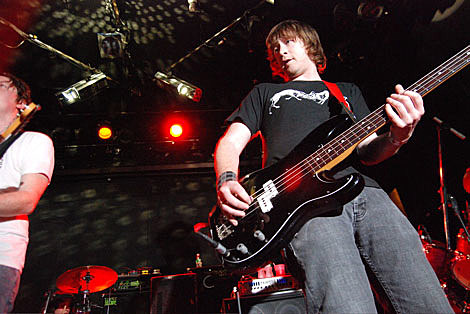 The tiredness continued and I didn't head out again until Wednesday of this week (4/1) for the Whip and Late of the Pier's show at Bowery Ballroom. I arrived just a little after nine, to a surprisingly, very full Bowery Ballroom (especially since the last I'd heard the show hadn't sold out). The Whip had already started, but I think I only missed a song or two. While they are not the deepest, or most serious electronic/dance band out there, their poppy, very upbeat performance had everyone dancing by the end. The effects sounded great and the live drums, bass, and vocals gave the songs the punch they needed to get everyone going. They finished a little before 10, at which point Late of the Pier were supposed to go on...but their set-up took forever (40 minutes).

During that time I was trying to remember what exactly I liked about them so much when I first saw them back in October. I was drawing a bit of a blank...

Thankfully as as Late of the Pier finally began, it all came back. Their energy was amazing and their playing was very tight. I still can't really pin them to a genre, which I love. The songs they played were varied enough that their set didn't get boring, but there was still a sense of unity to their material. Late of the Pier were rocking, yet very danceable, and I left the show very excited and optimistic about their music (I can't remember the last time I was this excited about a new band)...and decided immediately to see them again at Studio B Friday night (4/3) which I absolutely urge you to do as well. A decent chunk of the crowd was dancing their asses off at Bowery, which only makes me more excited about the fun likely to erupt inside the B. Specifics on the Studio B show and lots of other things happening this weekend below:

Late of the Pier and the Whip at Studio B. Go! 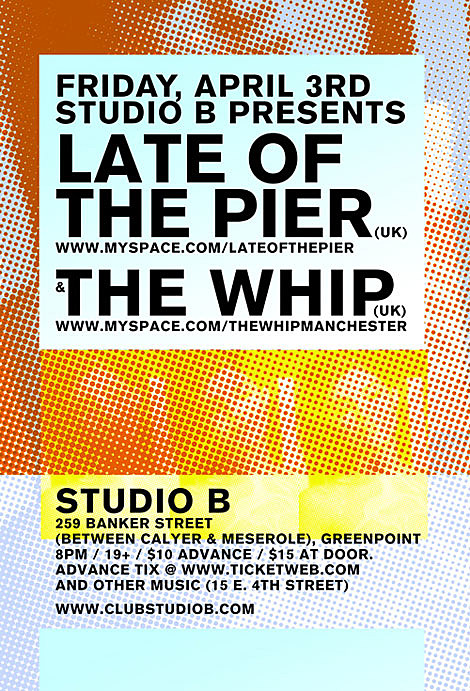 If you don't want to go see the Whip and LOTP...there are other options happening around the same time:

- First Fridays continue at the Guggenheim with DJ Sabo. More info on DJ Sabo and the party here.

Afterward there is a lot going on:

You could head across the village to Le Poisson Rouge for the official Presets after-party which will feature dj sets from KIM (1/2 of the Presets), the Golden Filter, DJ Cat, and Elhaaam (EVR). You can download a new track from KIM ("Party Machini" remixed by Tomboy) over at RCRDLBL. 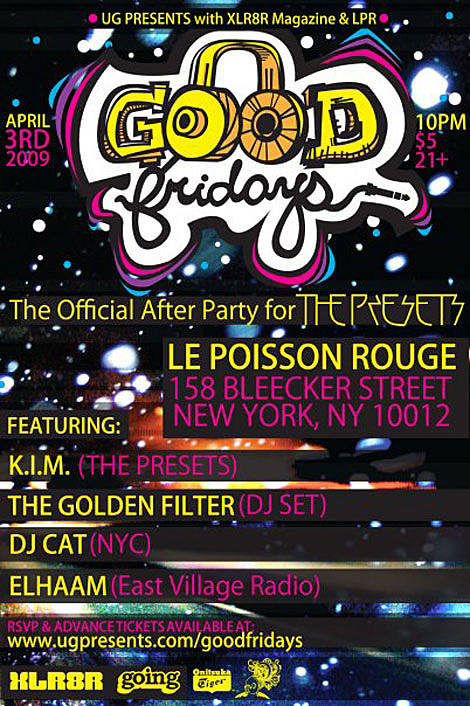 I've been a little less "electro"-oriented lately, but despite that am still pretty excited that MSTRKRFT and the Bloody Beetroots are in town (honestly much more excited about the latter). In any case, they are both at Webster Hall along with Bird Peterson. Based on the last time MSTRKRFT were there, I would say expect it to be sweaty, packed, and complete mayhem: 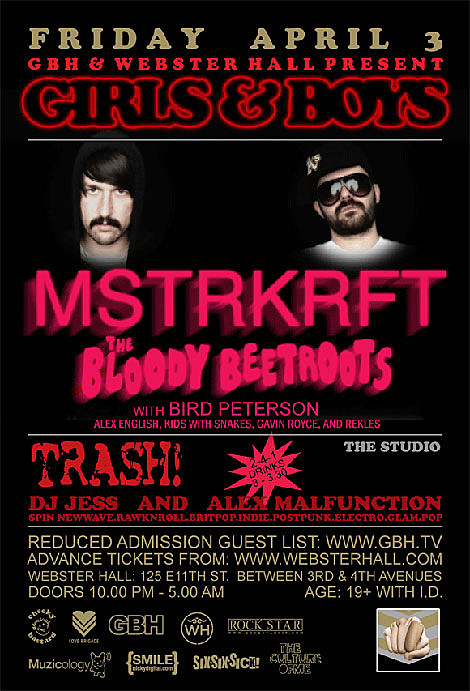 If you prefer to party in Brooklyn, Flashing Lights is back at Studio B with residents Ayres, Nick Catchdubs, and Jubilee, plus special guests DJ Lindsey and La Roux.

$7 with RSVP. Advanced tickets available here. $12 at the door.

Saturday night a whole bunch of artists are getting together and performing the Music of Arthur Russell at Le Poisson Rouge: 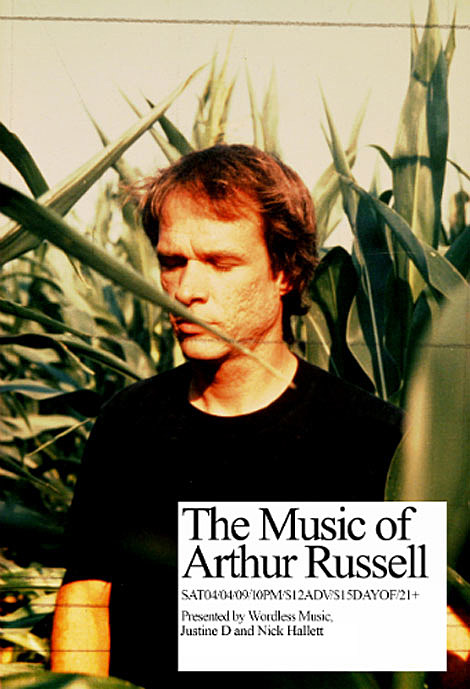 This concert of live music, held on the anniversary of Russell's passing, will bridge the gaps between the extremes of his practice, and will include instrumental works, dance tracks, and songs played by an ensemble of Russell's original collaborators in addition to a few special guests. A dance party follows with DJs and a special late-night performance.

Arthur's Landing was formed by Russell's closest friends and musical colleagues: Steven Hall, Ernie Brooks, Peter Zummo, Bill Ruyle, Joyce Kirby, Elodie Lauten, Mustafa Ahmed, and John Scherman. It is frequently spoken that Russell worked with the crème de la crème of New York's downtown music community. Here they are, as one collective, performing Russell's songs as no one else can. Sitting in with Arthur's Landing will be musician-composers Nick Hallett and Alex Waterman.

They will be joined by special guests, including Nomi (of Hercules and Love Affair). DJs Lee Douglas (Rong), Justin Vandervolgen (ex-!!!), and Dan Selzer (Acute) play Russell's disco classics, while artist Rafael Sanchez caps off the evening with a special performance to Dinosaur L's "Go Bang!" 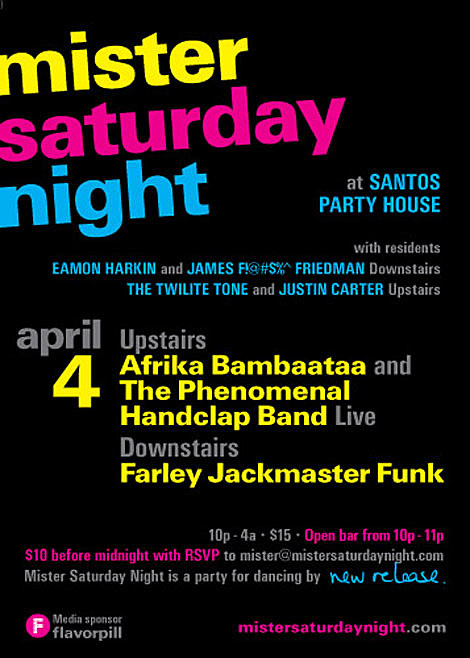 There's also a dance party going on at Studio B Saturday with Worthy (Anabatic/Dirtybird), Derek Plaslaiko (Bunker/Spectral), Joee Irwin (Palms Out Sounds), and Brandon Sek (Curb Crawlers). You can download a bunch of their tracks at the top of this post. 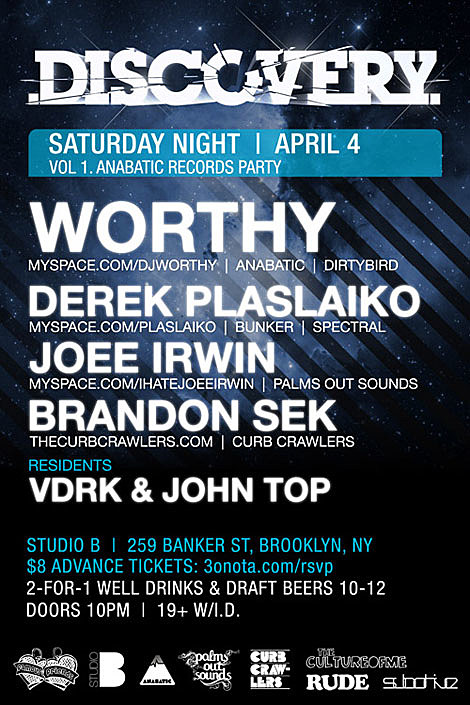 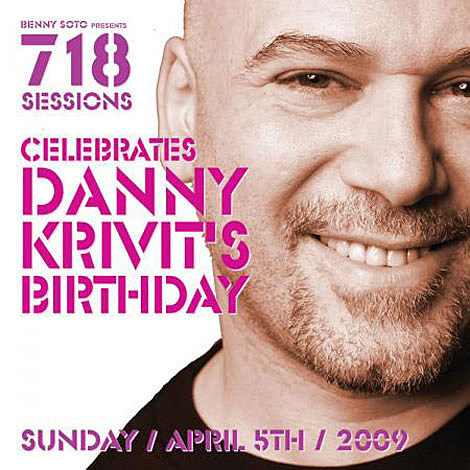 As I alluded to already in this post, I'm in the middle of a more disco/house/classics, less electro period. It's a little jarring, but I'm just trying to roll with it. Conveniently, the latest installment of Disco 3000 (which is what threw me for this disco, etc. loop) is on its way in just a couple of weeks. Check out the info below, mark your calendar and get ready to go: 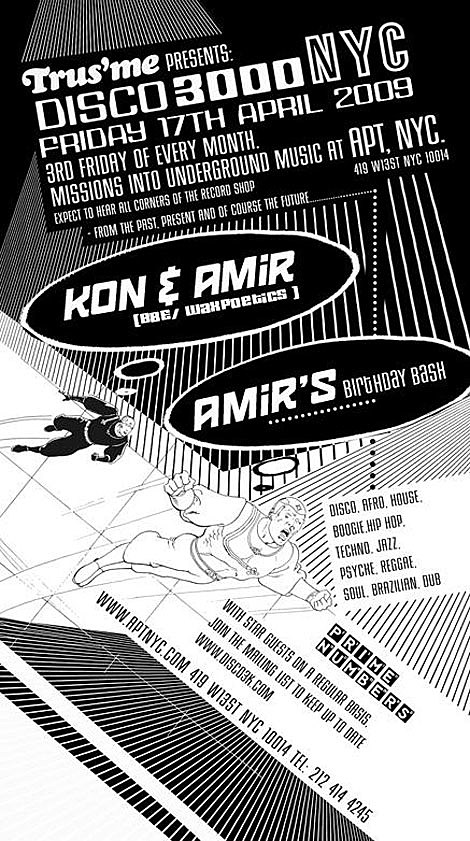