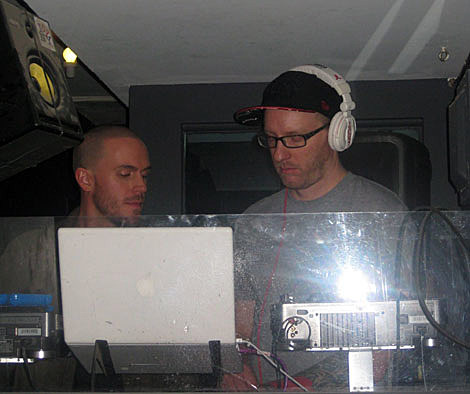 Last Friday I was too tired to brave Webster Hall for Congorock even though I wanted to, and not being here Saturday or Sunday meant I didn't go out until Tuesday. That night I went to another one of the excellent parties Scion has been throwing monthly at Plan B. I didn't find out about it until the last minute - hopefully some of you saw the details I posted in the comments.

In any case...it wound up being a lot of fun. It wasn't as packed as quickly as usual, but by the time Jokers of the Scene started deejaying, Plan B had filled up nicely. Their set lived up to the two times I saw JoTS previously - great and full of new stuff, hardly any of which I knew, save for "One Day" by the Juan MacLean (who is playing a show at LPR tonight, but more on that and other upcoming events below...).

Toward the end of their set, just minutes after I had finished talking to a friend about Mr. Oizo, the next deejay coincidentally opened his set with "Flat Beat". The shock continued when the other half of the dj duo (who I later discovered were Super Viral Brothers) started to drop verses over the beats. He (Anthony Mills) continued to do so for the rest of the set which consisted of the following tracks (along with a few others) delivered by Olle Cornéer (who also happens to be half of Dada Life): 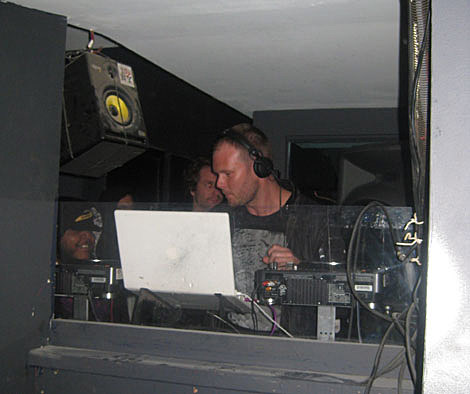 We've got some intense nights of dancing headed our way again this week, especially Friday (4/16): 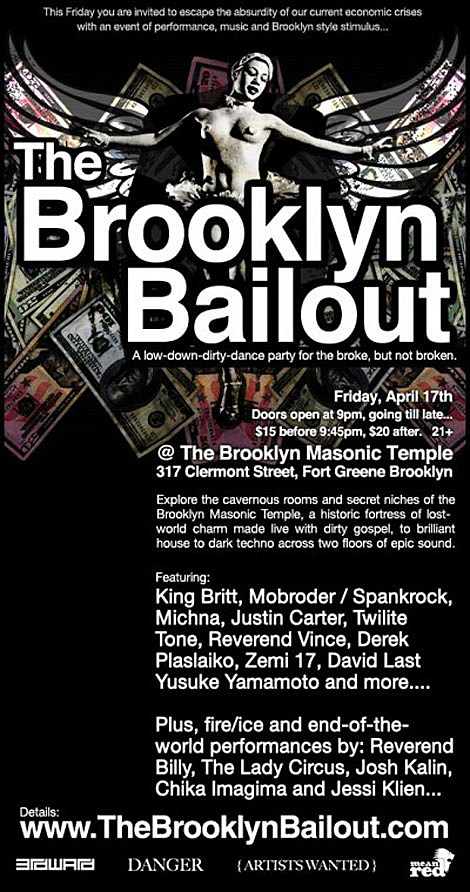 The Museum of Natural History continues it's monthly dance party in a planetarium. You're got to check it out at least once (and you'll probably be back for more). This month features Flying Lotus' experimental beats and dubstepper Kode9. Full party info below: 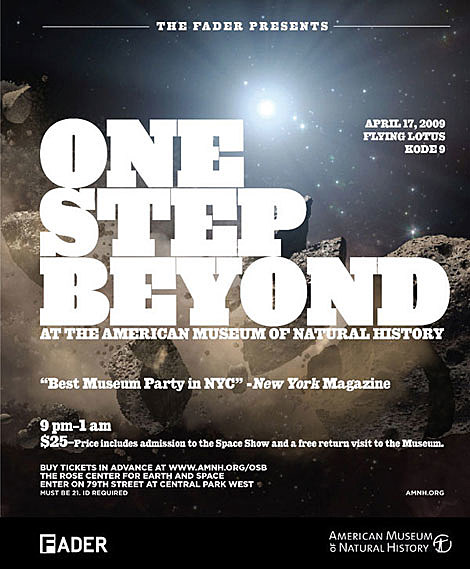 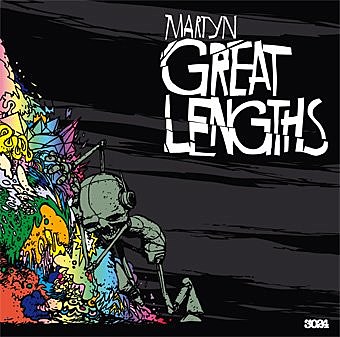 At Cielo Brendon Moeller and IJ Catling (Dancetracks Digital) will be helping Martyn celebrate the release of his new album Great Lengths, out April 20th on his own label - 3024: 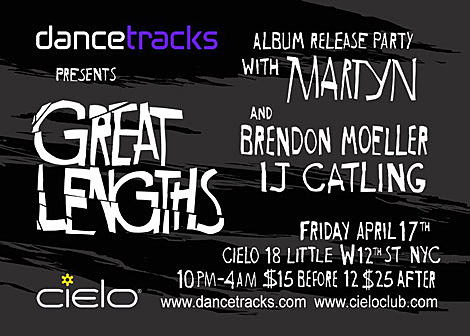 If you're feeling disco for Friday there is a lot from which to choose:

As disappointed as I was not to see Trus'me at the first Disco 3000 party at APT back in January, Kon & Amir were playing some absolutely great disco. They are back again for the latest installment of what is shaping up to be an excellent, fun monthly. Add Trus'me Nyc to your friends on Facebook for info on future parties. Info on this month's below: 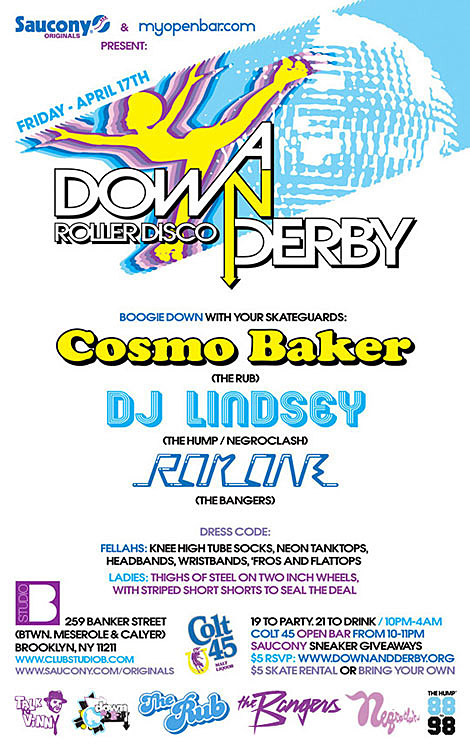 ...and a disco loft party with the guys from Sharegroove (plus a mix you can download at the top of this post): 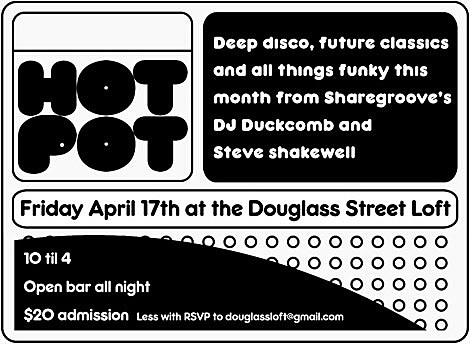 RSVP to douglassloft@gmail.com for the exact location.

If you're looking for something on the newer side of disco former Week In Dance writer David Bruno is deejaying his People Don't Dance No More party at Trophy Bar along with fellow resident Robot Blair (who is celebrating his birthday!). Info on the party below, plus tracklisting for David Bruno's "I Went To Miami And All I Got Was This Stupid Mix" which you can download at the top of this post: 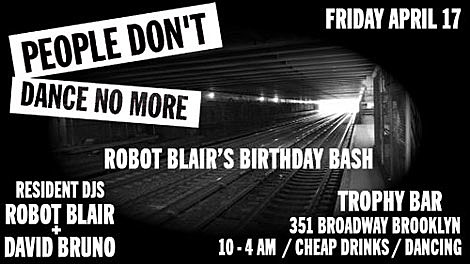 One final disco option for Friday: the Juan MacLean is celebrating the release of his new album The Future Will Come, out April 14th on DFA, with a live performance at Le Poisson Rouge. Advanced tickets available here

Also at Le Poisson Rouge Friday night - a separate dance party starting at 10 in the Gallery Bar, free with RSVP: 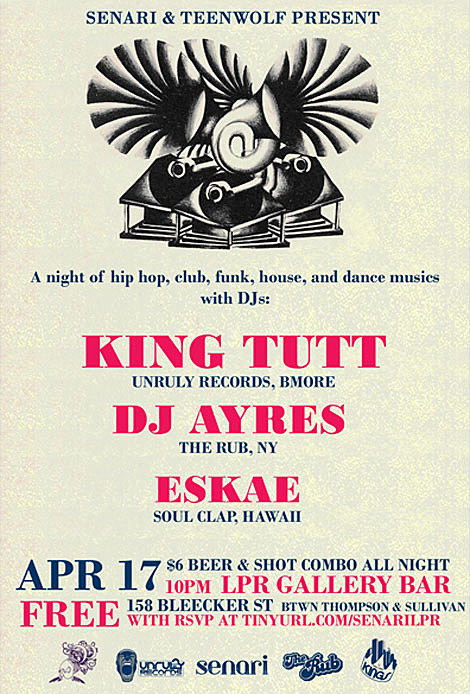 Still on Friday, but moving away from disco...

One of my favorite Montreal deejays, Hatchmatik is in town. His sets are very energetic mixes of very current electro, that I've witnessed him play to packed rooms on Tuesday nights (if you're ever up there check out T33nwolf Tuesdays). While he's here he's deejaying doppleBÄNGER which is a masquerade party along with several other deejays. Full line-up and info below: 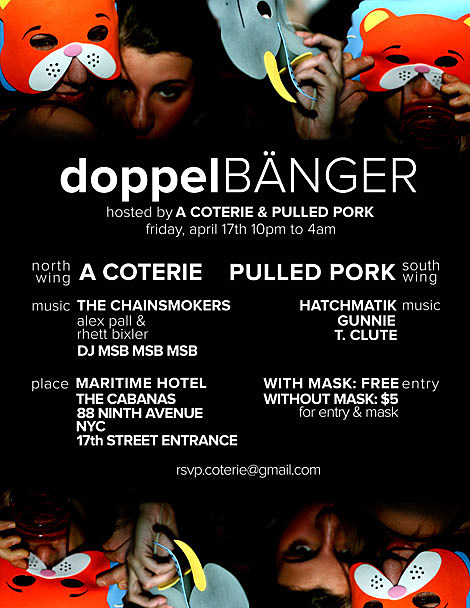 One of the pioneers of French touch, Etienne de Crecy, is deejaying at Webster Hall. From what I've heard his sets are amazing, and not to be missed. I really hope he brings the cubes:

On top of that, young Ed Banger Feadz will be deejaying as well. He flew under my radar until I saw him drop a very good set (#17 in my top 20 shows/deejay sets of 2008) in September. 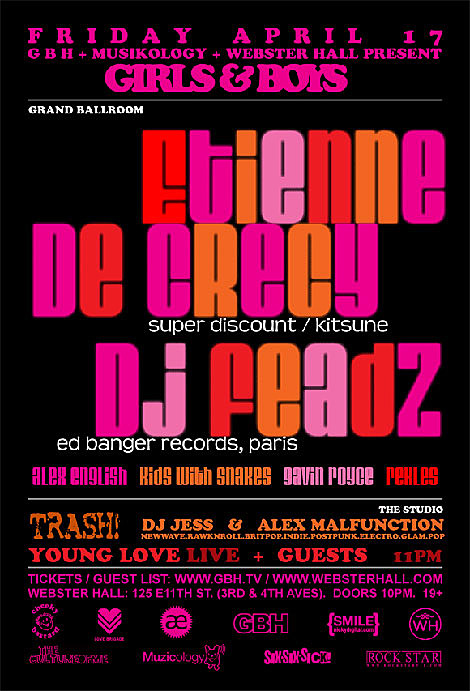 $10 reduced admission before midnight with RSVP.

Famous Friends have Austalia's Bag Raiders, plus lovely locals Jubilee, Kap10Kurt, Rude Crew DJ's, Bradley D, and VDRK deejaying their party at Europa. Download a couple of Bag Raiders' tracks at the top of this post, party info below: 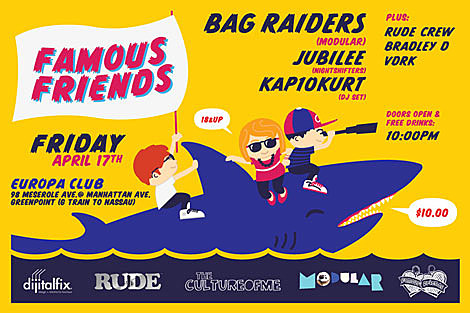 The first in a new series of monthly parties happening in a Soho loft at 38 Howard Street or "Die Fabrik", is on Friday. It's been put together by a group called Rex Production whose mission is

...to create a space where people of different backgrounds and interests can unite and engage with one an other in an atmosphere of freedom and fantasy. Whether it manifests as a party, an exhibition, or some other kind of gathering. The purpose of the event is to transport people out of their everyday reality and immerse them into a unique underworld, where music (both electronic and live) and visuals (in the form of video installations and elaborate sets constructed by designers from the film industry) combine to create a sensory experience unlike any other. 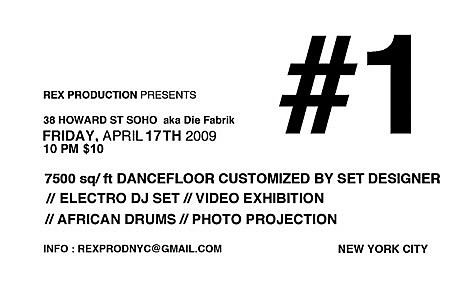 LORD FINESSE of DITC is DJing everything from disco classics to deep breaks and GRAND PUBA of BRAND NUBIAN is rocking the mic. Residents Justin Carter (former APT Music Director) and The Twilite Tone (Common collaborator and DJ) warm it up. In the basement Detroit's finest producer THEO PARRISH drops house and modern soul edits like no one else can, after Eamon Harkin and James Friedman start things off.

Check out an interesting interview (which includes some of his tracks mixed in) with Theo Parrish below:

If you like what you hear you can download a dj set he spun at Djoon in Paris back in February here and get excited for Saturday!

Lauren Flax is at Mr. Black: 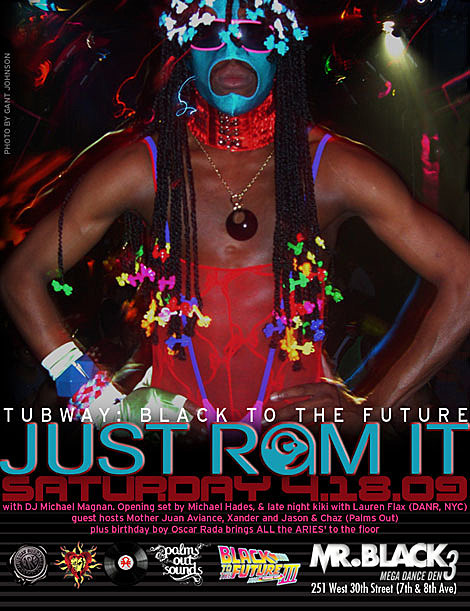 Stanton Warriors are at Studio B: 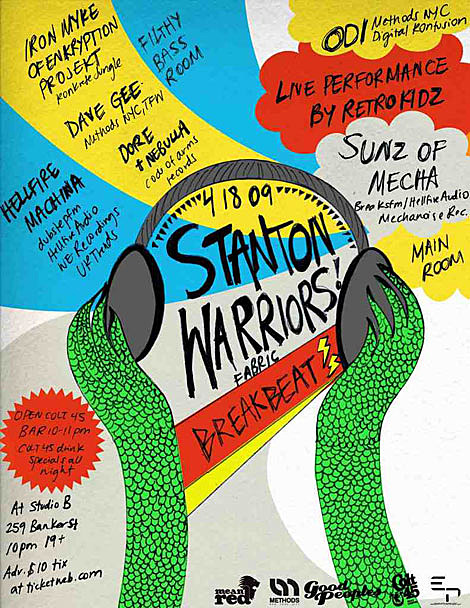 For something less on the electronic side check out Grand Groove with Chairman Mao at APT: 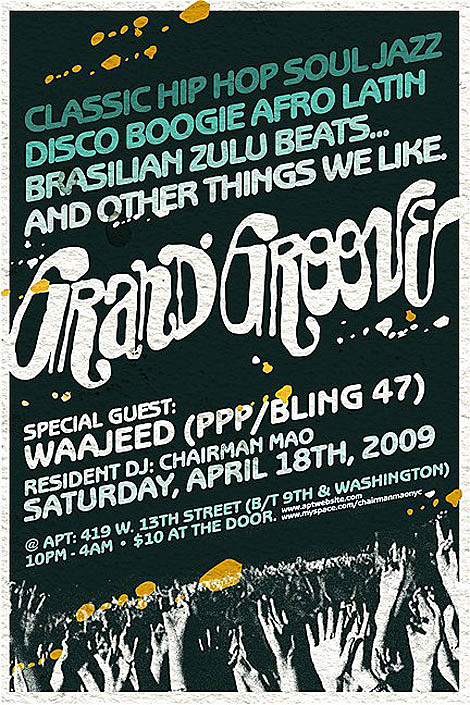 Monday (4/20)
- Francois K is deejaying Deep Space at Cielo. Here's what the schedule looks like for April: 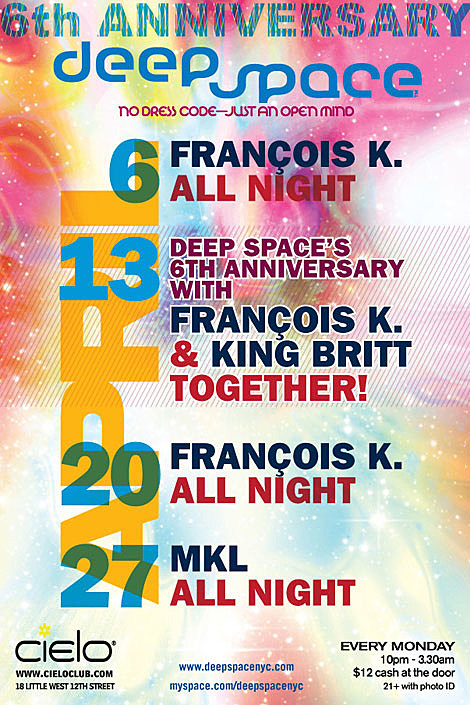 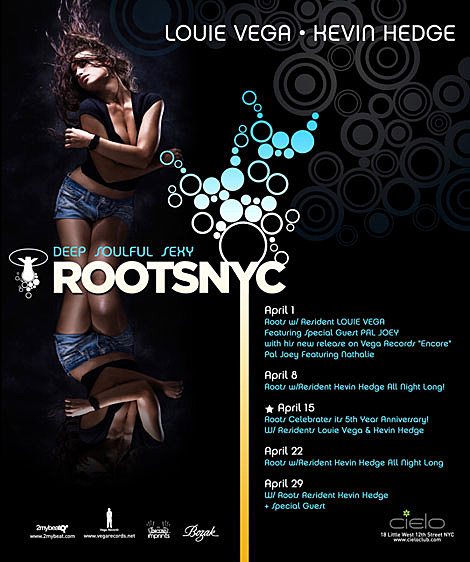 While I have pretty much dropped the ball when it comes to traveling to any music festivals this spring, my only really big regret hit me at 2:39 on Wednesday (thanks Twitter...btw we're on there) which was right after I saw the Coachella schedule for Saturday. 9:30-11, Sahara Tent - Chemical Brothers dj set....c'est la vie (ugh!). Part of why I'm regretting it so much is having witnessed 2 epic dj sets they did here in New York in fall of '03 and spring of '04, I know what a great set I'll be missing. What have been some of your best and worst dance decisions?