DOWNLOAD: Moby - Shot In The Back Of The Head (MP3) 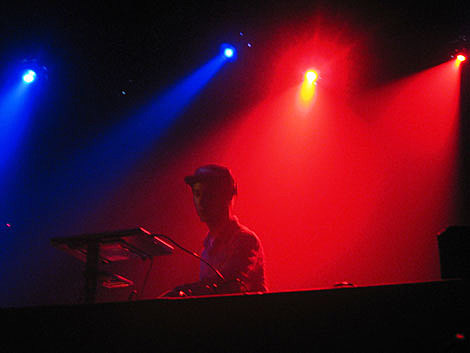 There was a lot happening last week in dance. The amount of great options for Friday alone was overwhelming...there was Flying Lotus and Kode9 at AMNH and the Juan Maclean (who recently added a NY tour date with the Field) played Le Poisson Rouge.

I opted to go to Webster Hall to see Feadz and Etienne De Crecy. Feadz literally bounced his way through his entire set which included a bunch of recent electro, and a little bit of this and that thrown in...all of which he manipulated and tweaked to perfection. Partial setlist (and much, much more) below... 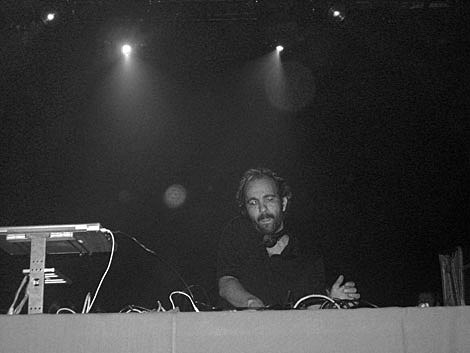 As great as Feadz's set was, Etienne De Crecy killed it in a way I've never seen before. His set was a blissful balance of old and new school French dance music. He was playing tracks that you could tell were new/electro-influenced, but that had an edge. Everything sounded really, for lack of a better word, good...the tracks sounded perfectly finished (perhaps it's all his years of production experience). It was an amazing, amazing set, even without the cubes (they wouldn't fit on the stage at Webster!).

I really hope he brings them to All Points West (and that his set is scheduled late enough, unlike Underworld's performance last year, for the lights to have their full effect). Here's a video of the cubes and Etienne in action at Coachella:

After months of waiting the Simian Mobile Disco show at Highline Ballroom is finally here (this Thursday - 4/23)! Following the much blogged about debut of their live show at Studio B back in July of '07, SMD have dragged their pile of analog gear and wild light show all over the world. They've given dozens of performances (New York alone saw them 4 times after the debut) over the past year and a half which featured tracks from their much acclaimed debut album Attack Decay Sustain Release.

The duo are back here once again with what is (from what I've heard) a brilliant, new, live show. The performance will likely feature two of Simian Mobile Disco's recent tracks "Synthesize" (video + SMD 2009 tour dates) and "10,000 Horses Can't Be Wrong" (video + August Williamsburg Waterfront announcement) which show their sound shifting in a more house-oriented direction, plus a number of surprises from the pair who have been hard at work on their latest album. To add to what promises to be a great evening of new electronic music, James and Jas will be treating the crowd to one of their signature, fun, unpredictable, and super danceable dj sets. 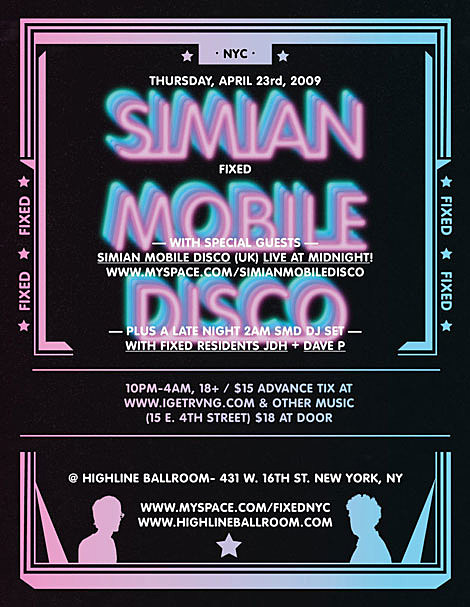 Advanced tickets available here, or you can go for free after 1:30am (after the live show) for the late-night 2am SMD dj set.

Some other things Thursday night:

The man behind all of Fool's Gold's awesome artwork, Dust La Rock, debuts a new collection of work - "Best Of The Beast". Fool's Gold throws a great a party:

Be sure to RSVP!!

I never really got into Peaches, but her new album I Feel Cream features a number of collaborations with some great electronic artists such as Soulwax and Drums of Death (the latter of whom will be on tour with her). You can have an early listen to the album over at Le Poisson Rouge where there will be a free Peaches listening party: 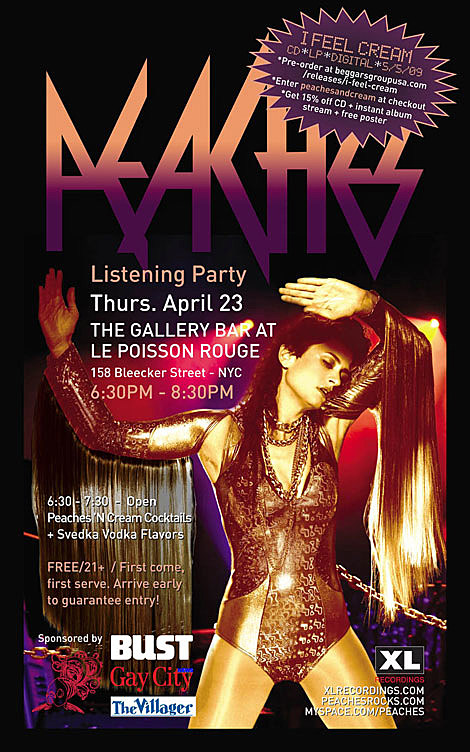 Ghostly labelmates Michna and Mike Servito are deejaying "Too Big For NY" over at APT, plus Derek Plaslaiko, and LA's Staccato will be playing a rare New York set:

Also on Thursday...things get housey with Jellybean Benitez at Bar 13: 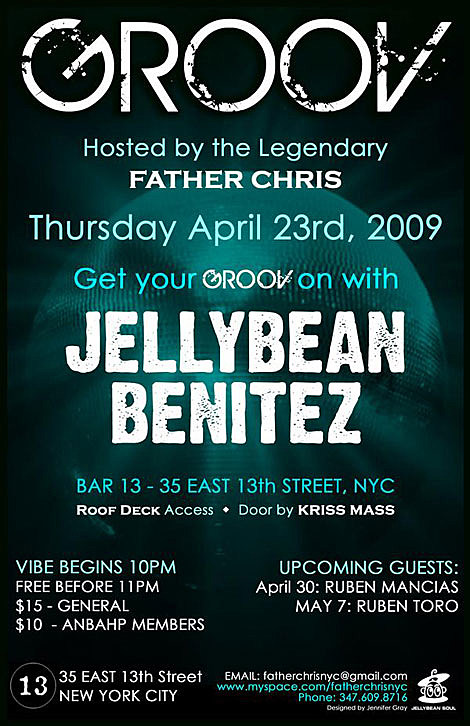 As we previously mentioned, Moby (who recently joined Twitter) is doing his "first-ever live electronic/ambiant performance" at the recently turned 6, Issue Project Room:

In his first-ever live electronic/ambient show Moby will re-work some older tracks along with new electronic interpretations of songs from his new album, Wait For Me (Mute, 2009). The set will bring together a combination of new technologies (pro-tools, digital processing) and old (analog reverbsand synthesizers).

There are regular and VIP tickets available for the show. 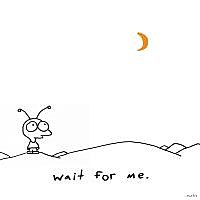 Moby's new album, Wait For Me is out June 30th.

Moby - Wait For Me tracklisting

According to Moby "...the creative impetus behind the record was hearing a david lynch speech at bafta, in the uk." which you can read more about here. Moby recently appeared at Radio City Music Hall to help raise money for the David Lynch Foundation. David Lynch directed the video for Moby's "Shot In The Back Of The Head". Watch the below and download the track at the top of this post. Moby and David also recently discussed music and abandoned factories. You can view a video of the discussion here.

Moby - Shot in the Back of the Head (official video): 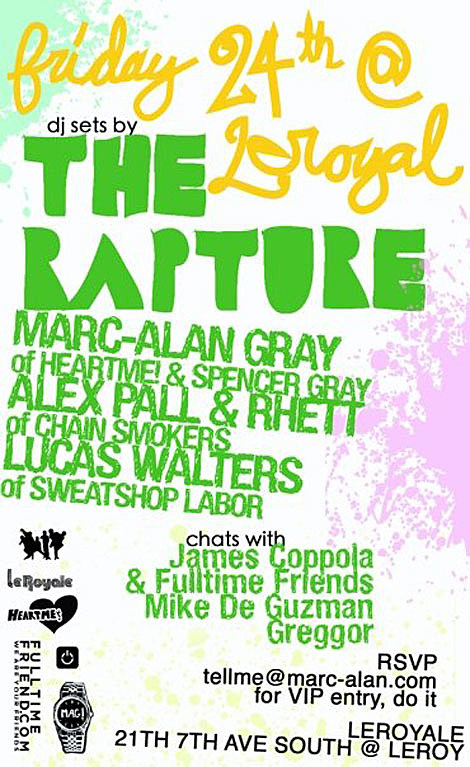 A whole bunch of West Coast deejays are at Le Poisson Rouge for Sub Swara's Sub City Sessions. Glitch Mob, the West coast, genre-blending, 4-person dj crew will be there along with Lazer Sword, and Ana Sia.

Dirtybird Justin Martin is at Santos for Mr. Saturday Night, plus Larry Heard will be bringing some classic Chicago house! 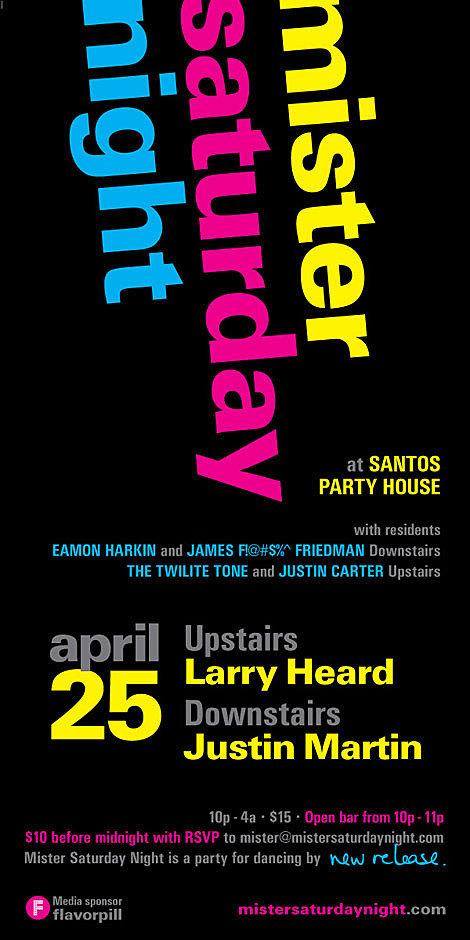 $15 at the door. $10 with RSVP to mister@mistersaturdaynight.com.

Pulled Pork (a fairly new party - the first was in January) has featured some pretty interesting line-ups thus far. This Saturday they've brought in some deejays from Detroit label Subtrak, plus Mike Servito of Ghostly. Info below, plus check out a mix from Ryan Brogan & Chris Alker of Subtrak here: 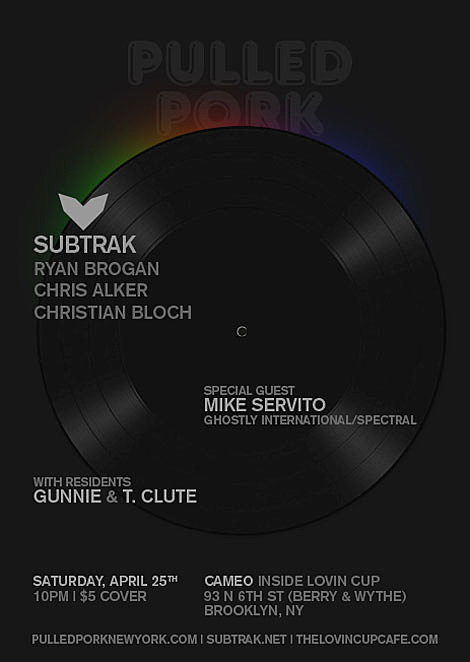 will be doing a little bit of celebrating of his own, marking the release of his latest CD compilation: "One More Tune." The double CD is something of a "concept" CD - what are some of the best tracks he's played when asked for "one more tune" by clubbers who refuse to see the night end.? Exploring that concept, he's delved deep into his archives to come up with a 15 track mix CD that is loaded with Tom's personal dubs and re-edits, including the legendary Chicago classic "Promised Land" by Joe Smooth and Derrick May's Detroit anthem "Strings of Life." 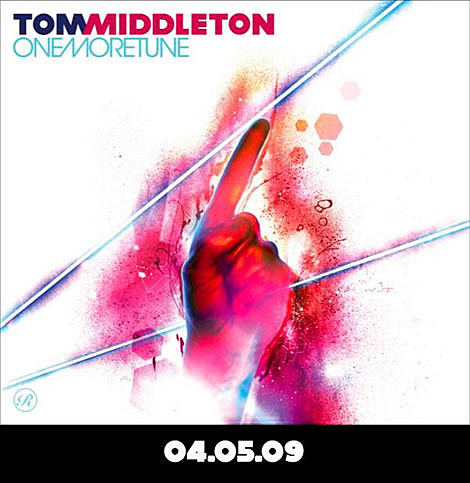 Tracklisting and party info below: 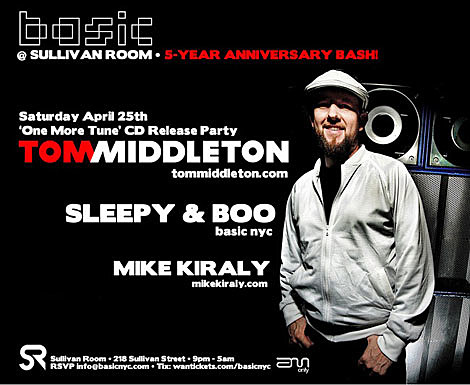 - Free disco with the Play It Loud crew at Public Assembly!

- Matthew Dear is deejaying Save the Cannibals at Rebel with Eric Cloutier.

- Michael Mayer is deejaying Fixed at Studio B. Check out some footage of his set at the Don't Believe the Hype Festival which took place in France earlier this month, along with party and ticket info below: 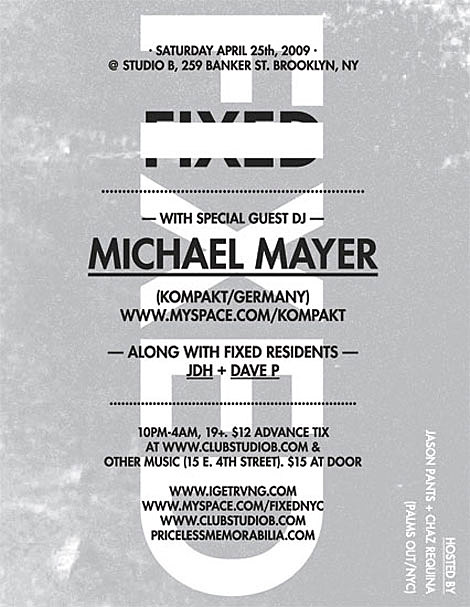 Advanced tickets available here. Also, Michael's labelmate (and sometimes dj partner) Superpitcher will be deejaying at Studio B the following Saturday (May 2nd) and there is a combo ticket which includes both dates and saves you $4. 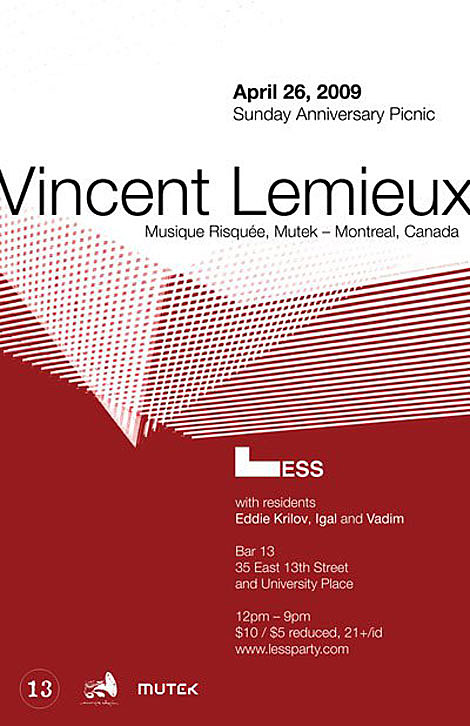 That's everything for this Week In Dance...and I'm actually going to be on vacation for the next 2 weeks. I'll be hitting various dancefloors in Paris with one of my favorite dance partners in crime. I'm really looking forward to it, but the thing I have the most trouble with when it comes to going on vacation is the stuff I'll be missing when I'm out of town. There's a lot happening (as always) while I'm going to be gone. Here is just some of it - the things I strongly recommend checking out and am the most bummed about missing:

May 1 - Mowgli at Studio B. He remixed the Chemical Brothers track "Do It Again" (which was known as "Boot It Again") last year and then I Iost track of him. Would have loved to see someone new!

May 1 - Surkin is deejaying...at Pacha. His deejay sets are great...and the mixing of the Pacha and non-Pacha crowds should be interesting

May 8 - DJ Falcon (with Fischerspooner and Larry Tee) at Webster Hall. It figures I'm going to Paris and one of my favorite deejays from there is coming here. His set at Le Poisson Rouge was great back in November.

May 9 - Trevor Loveys at Studio B. The last time Trevor was here I was in Montreal! But the time before that (which was July '07) his set was good and fidgety.

Keep dancing while I'm away and let me know what you did in the comments!