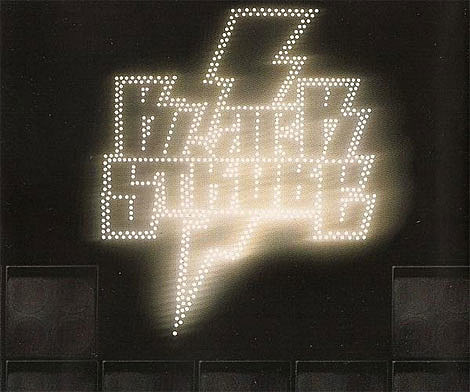 Sorry for the interruption in the Week In Dance...there were some foreign dancefloors I needed to explore. Hopefully you were able to get down without me. As much as I'm dying to tell you what I did...there's way too much happening this week (and I need to go through some photos).

Before we get to that, one quick heads up that Fatboy Slim (also more recently known as Brighton Port Authority) is DJing Terminal 5 on June 24th. Tickets are currently on American Express presale, with the regular sale starting Friday at noon.

Black Strobe and Arnaud Rebotini are performing at Le Poisson Rouge. I became familiar with them largely because of their excellent track "Me and Madonna", which pleasantly haunted my ears on many a compilation since its release on Output in 2002. I've heard some of their remix work here and there since then, but other than that, lost track of them. Apparently since then Black Strobe have evolved from a duo (Arnaud Rebotini and Ivan Smagghe) to a 4-piece band. Arnaud's fond of analog gear (check the video of a solo performance a few months ago below), while the band's sound seems to be more intensely rock-driven than in early days (check out the video of their 2007 single, "I'm a Man" below):

It's 21+, show & doors are at 11pm. Advanced tickets available here or $12 at the door. Eamon Harkin's deejaying too!

Meanwhile, in the LES Plant Music is throwing a FREE party at 105 Rivington. Plant is a great New York dance label and owner Dominique Keegan's sets are excellent - if you've never caught him in deejaying in New York over the years, it's something you've got to do! Download his "All Dom Wrong" dj mix at the top of this post (tracklisting below). Kap10Kurt will be deejaying as well, plus new Brooklyn disco outfit the Golden Filter (who have an interesting little blog of photos from the road) will be throwing down a dj set as well. 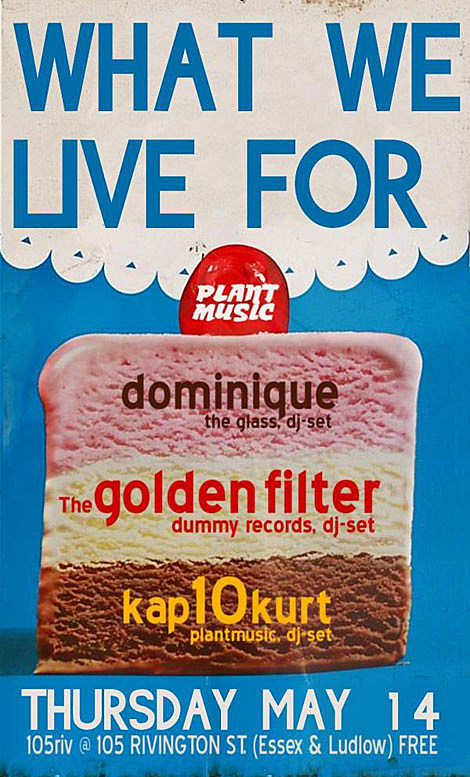 In other New York label & LES happenings...DJ Van Scott of the established DJ's Are Not Rockstars crew, but new DJ's Are Not Rockstars label will be guest deejaying False Aristocracy's Ether party at Happy Ending along with DANR label & crew founder Alexander Technique. You can download a bunch of original tracks & remixes from Van's side project with Jad Cooper - DRLKT Freddie, here, plus there is a brand new dj mix from Alexander Technique at the top of this post. Tracklisting and party info below:

Some other parties also happening on Thursday (5/14):
- Dance Class at the Studio with Webster Hall (info)
- Hits at the Annex (info/RSVP)
- Groov at Bar 13 (info)

Bruno & Blair hold down the disco at Trophy Bar: 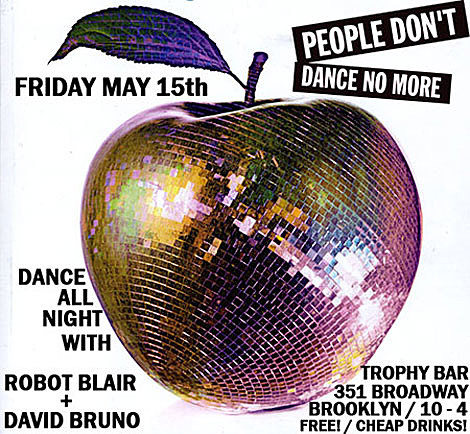 In what looks like the beginning of an abrupt trend of atypical bookings (how were Surkin & co. while I was gone?) Treasure Fingers and Benny Benassi are deejaying Pacha? Full info here.

Deadmau5, who recently explained his gear set-up to Wired (video below), is deejaying Webster both Friday & Saturday night: 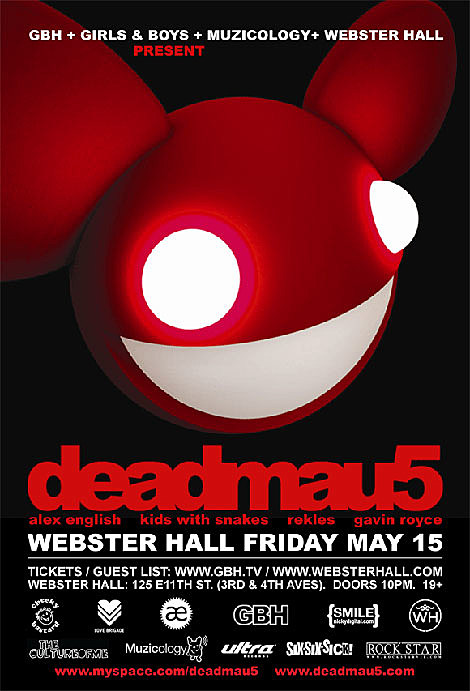 There's a fundraiser for Figment,

The party is called "Overboard" and it's at the Battery Maritime Building Ferry Slip...nothing like a nautical themed throwdown to get you in the mood for dancing in the summer (we're almost there)! 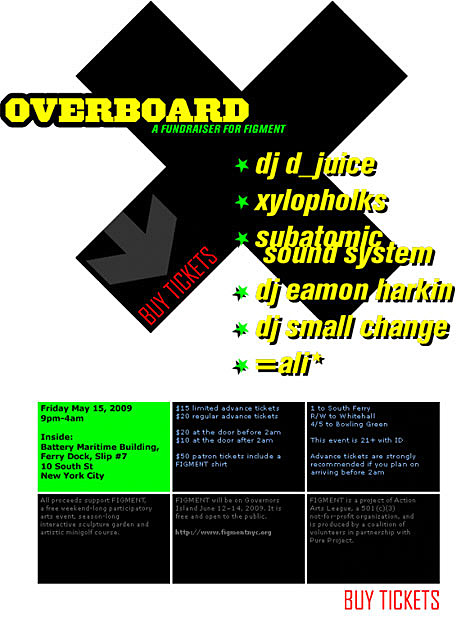 Also on Friday (5/15):
- Trouble & Bass with DJ Class & B. Rich at Studio B.
- Streetlab at 92Y Tribeca. Download their Hall & Oates remix at the top of this post (yea-yuhh Yacht Rock!).
- Josh Gabriel is at Cielo.
- Estaw & Palms Out are at ">Ruff Club.
- Turntables on the Hudson's opening night at Water Taxi Beach.
- Dub War with Scuba and Appleblim, who I've been hearing about a lot lately, is at Love.
- Sound Noir with a bunch of deejays - I'm partial to the disco loveliness of Marcos Cabral...but everyone should be able to find something they like on the bill. Party location TBA on Sound Noir's site shortly.
- RGB at Monkeytown.
- Senari & Teenwolf party LPR gallery bar (free!).

Phew! That should keep you busy & get you warmed up for an equally maddening amount of dancing to come this weekend, heading straight into next week. More info on more dancing soon!