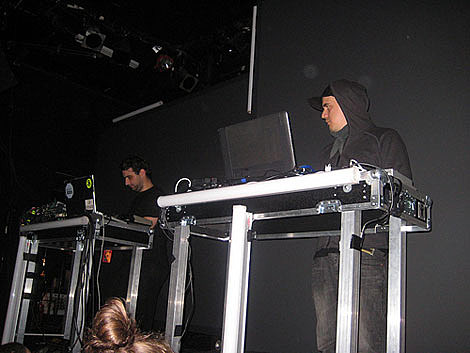 Last week in dance was by far, one of the best I've had this year. Things were off to a rocky start Friday night when APT's last minute closing left Disco 3000 temporarily homeless, before it was moved to Le Poisson Rouge. Unfortunately word didn't seem to get out fast enough, leaving very few disco revelers on LPR's dancefloor. Fortunately Disco 3000 will be back in just a few weeks (June 19) and Trus'me will be back deejaying here next weekend for what seems to be a dance party meets circus, And Everyone Laughed.

Back to last weekend...after a fairly tame Friday night, Saturday night was very busy. I started my evening by heading to Music Hall of Williamsburg to see Moderat. From there the plan was to head to Mr. Saturday Night (which was thankfully at a loft not too far away) to see Pilooski.

Unfortunately things did not go exactly as planned. Moderat were supposed to go on at 1. Modeselektor's shows usually clock in around an hour so I figured Moderat's would be similar and I might be a little late for Pilooski (who I heard was going on at 2). Moderat's show was about an hour...but it didn't start until 1:50! I had made the decision to attempt to go to both, fully aware that this might happen so I just crossed my fingers that Mr. Saturday Night was running behind and tried to enjoy Moderat.

Overall the show was pretty interesting. Having heard virtually none of Moderat's tracks before, but being familiar with both Modeselektor and Apparat, I enjoyed hearing how each of their respective sounds worked into the performance. There were lots of dreamy, lush, sweeping bits and compositions you could attribute to Apparat...while more of the pulsing, choppy, filtered, synthy, & bassy elements could be traced back to Modeselektor. While some of the tracks fused their sounds together into something that seemed cohesive and new, most of the time I kept thinking either "Modeselektor" or "Apparat" to myself as the sounds in each song would change. I really enjoyed the live vocals and guitar Apparat added to some of the tracks, but by the end I wanted nothing to do with the dreamy mellow side of the music. Overall I liked the show (the music and visuals were great), but I kept hoping the Modeselektor sounds would fully kick in and take over, and while it got close at times and there was certainly a lot of movement on the dancefloor...it never got as crazy and chaotic as Modeselektor's show back in January.

From Music Hall of Williamsburg I walked as fast as humanly possible to the loft for Mr. Saturday Night. I arrived about a quarter after 3 (Pilooski had obviously started by then) and hit the floor immediately. Often times I have trouble getting into things mid-set...but Pilooski was in the middle of a disco groove and I was able to jump right in. While I missed a lot (d'oh!) of his set, what I did catch was masterful. Pilooski touched on lots genres and was really mixing it up. His transitions were great. He kept phasing different elements in and out, messing with the levels, cutting back and forth. He literally manipulated the hell out of every track and it was never overkill. Pilooski knows what he is doing. It was easily one of the top ten deejay sets I have ever witnessed. Unfortunately, shortly after 4 the party got broken up...and I left blissfully happy despite only catching just under an hour of what was probably close to a two hour set...it was that good.

The dance goodness continued on Sunday, but enough about last week (for now)...we've got dancing to do this week! Here's what's happening starting with...

Thursday night at Studio B, 2020 Soundsystem are headlining with one of their great live sets (plus guest vocals from Dominique Keegan of Plant Music/the Glass). On top of that all the other acts on the bill are side projects from the members of 2020 Soundsystem - Ralph Lawson will be deejaying, as will Dubble D (drummer of 2020 - Danny Ward), and Silver City (Fernando Pulichino and Julian Sanza).

Johnny D's remix of 2020 Soundsystem's "Sliding Away" has become the most charted track on Resident Advisor since its release on March 15 and you can download it at the top of this post, as well as a dj mix from Moodymanc (Dubble D's alter-ego). Also be sure to check out some mixes from Ralph Lawson's weekly radio show on Ibiza Sonica Radio 95.2 FM here. Party info & tracklisting below: 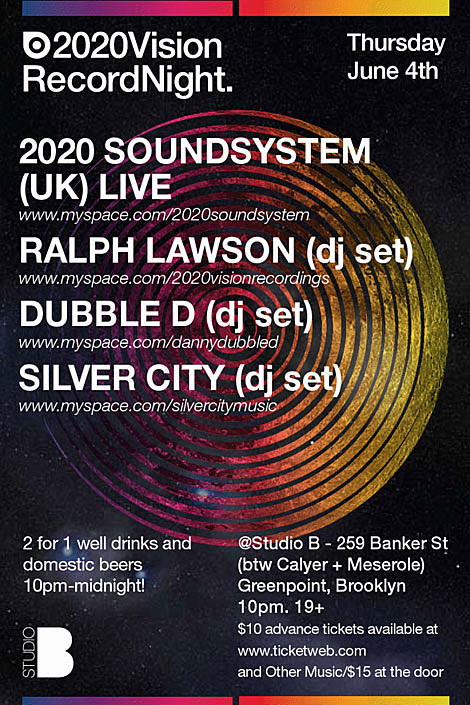 Also on Thursday night:
- Hits at the Annex.

The American Museum of Natural History will be ending the second season of their monthly dance party - One Step Beyond, with a bang, bringing in Moby, Holy Ghost, and Martin Moscrop to dj for the occasion! Moby's dj sets are very fun and danceable, covering a wide range of dance music (and perhaps will include some tracks from his new album Wait For Me, out later this month). Holy Ghost deliver a wonderful blend of updated & classic disco. Martin Moscrop will bringing his innovative sound all the way from Manchester. An excellent way to end a season of great parties: 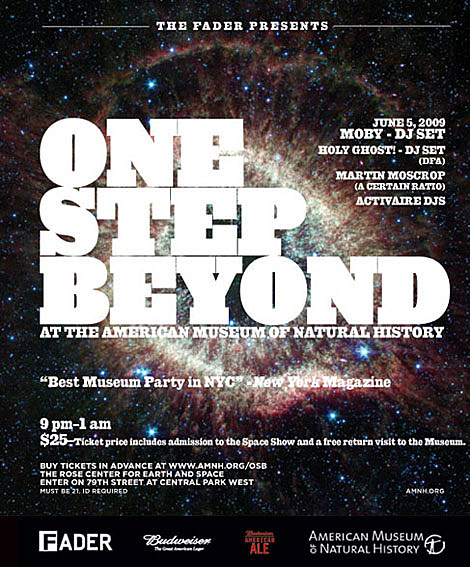 Also on Friday, Dave 1 of Chromeo will be deejaying at Webster Hall. Dave's definitely worth checking out as a deejay (it won't be one of those instances where someone from a band is "deejaying"). Growing up in la casa Macklovitch with brother DJ A-trak, Dave knows what he's doing and can hold his own behind a mixer. In addition to Dave-1, Viking will be deejaying. You can download a mix from him at the top of this post, plus his remix of Kid Cudi's "Dat New New". Tracklisting and party info below: 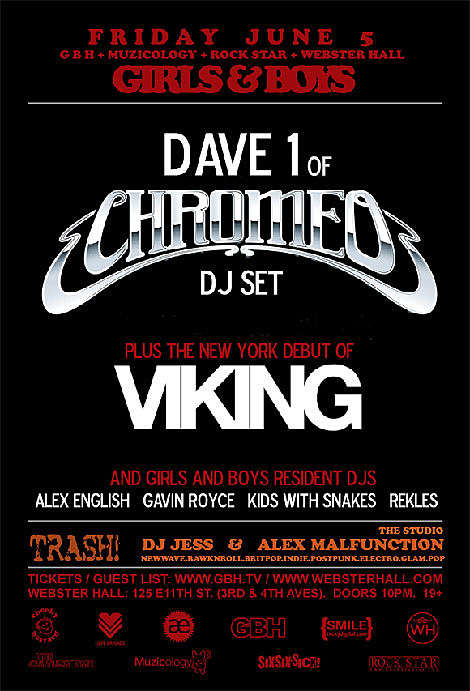 Free before 11, $10 until 12 with RSVP. Advanced tickets available here

More happening Friday night:
- Miike Snow, Natalie Portman's Shaved Head (who played Roseland in April), and One Man Party (who was great back in January) are at Studio B. (tickets) <--- miike snow is saturday
- The Bunker has a huge line-up set to take over both rooms of Public Assembly which includes Bruno Pronsato (live), Alva Noto aka Carsten Nikolai (live), Byetone aka Olaf Bender (live), Insideout, and Spinoza (Beyond, The Bunker | Brooklyn) in the back room plus an eight hour marathon set in the front room from Jan Krueger and Derek Plaslaiko.
- Marques Wyatt is at Cielo.
- Feel the Spirit with Jellybean Benitez at Sullivan Room.
- Acid Kids are at Ruff Club.
- Doojee party with Hardy Hard (Mayday, Low Spirit, Bass Planet), Are Dad (Moodgadget, Ghostly), and .thejass. (Robots) at Studio B. (tickets/guestlist).

There's much more headed our way in Part 2 of the Week In Dance, including some events coming up for next week, great outdoor dance parties on Sunday, and Jeff Mills at Sullivan Room on Saturday...but there won't be any partying with Mr. Saturday Night:

So, we have some unfortunate news.

Due to illness, Prins Thomas has had to cancel his gig in New York this weekend. We're trying to work something out for a make-up date in the fall, but for this weekend, we won't be doing the gig at Le Poisson Rouge. Eamon Harkin and Justin Carter will still be at Sunday Best with Luke Solomon this weekend, so you come say hey and get down there. We wish Thomas a speedy recovery, and hope to see you soon.