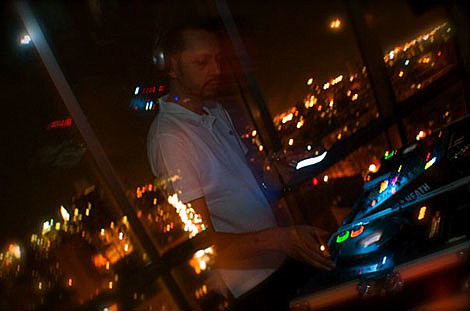 No dancing to report yet this week, but I am still basking in the afterglow of last weekend. As if seeing Pilooski deejay everyone silly Saturday night wasn't enough, I awoke on Sunday with a full day of dancing ahead of me. I made it out the door and down to the BKLYN Yard for Sunday Best by 4:30 at which point I was completely stunned by the size of the crowd. The Yard was already more full than I had ever seen it last summer and it was still so early! It proceeded to get more packed with people as the night went on (apparently seeing over 1,000 people!), but it never felt too crowded. The food & booze lines were a little long at times, but you have to keep your eyes open. The smoothie line (equipped with vodka & rum) only had 5 people on it (while at that time, the line for the bar nearly ran the entire length of the Yard)!

Moving on...the music was excellent. I knew we would be in for a treat when I saw that Mr. Scruff had hauled 2 big crates of records with him down to the Gowanus. For 3+ hours the Scruffy one treated the crowd (which was a huge mix of young people, locals, babies, little kids, and dogs) to a wide range of sounds...literally everything from soul, funk, jazz, disco, to dancehall. He played it all. Check out some great video from Electrodrone below and get ready for another great weekend in dance!

With Mr. Saturday Night/Prins Thomas being canceled, there is really only one event I am very excited about for Saturday: Jeff Mills at Sullivan Room. Despite his hundreds of releases I really wasn't familiar with him until recently. My excitement for the show has been building slowly. It started with a few of Jeff's releases in a stack of records a friend left at my apartment. Then it was DJ Boo's Facebook updates:

June 5: Jeff Mills- "The music I'm bringing to New York this weekend, for example, is music I'm actually making for the night; its material that's not released, probably won't be released and music that you can't buy and I'm making for this particular night."

Not to mention the tons of stuff I've been reading & watching since then (like these interviews on Resident Advisor & Time Out and lots of videos on Youtube).

It should be amazing. Download Sleepy & Boo's (who will deejaying the party as well) "Where Today Becomes Tomorrow" mix at the top of this post. Tracklisting and full info on the party below: 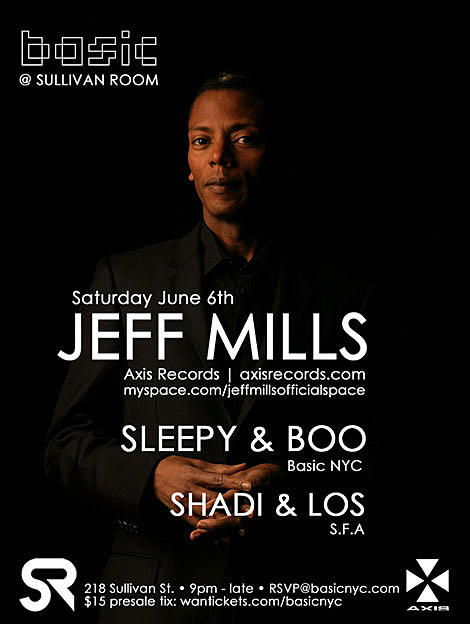 - Seattle-based disco lover Pat Le Stache of American Athlete is deejaying Lustr at Label Lounge.
- Hapa Kitchen BBQ at the BKLYN Yard with Finger on the Pulse deejaying.
- Nicky Siano deejays Water Taxi Beach at the South Street Seaport every Saturday night.
- If you were into his set at One Step Beyond last night, Martin Moscrop is deejaying the Tribeca Grand Hotel as well as Paul Ryder of the Happy Mondays (RSVP/info).
- Save the Cannibals at Rebel with Steve Bug.

Miike Snow are not playing Studio B.

I already mentioned one of last Sunday's excellent parties at the beginning of this post, but after catching Mr. Scruff at Sunday Best I hopped on the F-train and was on the Lower Eastside very quickly. I arrived at the Rivington Hotel for Été d'Amour about an hour and a half after Dimitri from Paris started deejaying, but his set went all the way until 12:15 so I didn't mind too much.

Firstly, the penthouse of the hotel is amazing. There are huge glass windows around most of it and the views are insane. Dimitri was situated right in the corner with windows behind him and on each side. It made for an excellent set-up allowing the crowd to take in the wonderful view of the city while watching him deejay. The party had a wonderful mix of people and was full, but not uncomfortably crowded. Some people were just sitting and hanging out, but far more were on the floor getting down. Dimitri's set was awesome and the nearly 4 hour length really let him cover a lot of ground....disco, loungey stuff, house, classics, 80's. Dimitri was singing to himself and dancing. The crowd was dancing and having so much fun...an excellent way to spend a Sunday in New York. This weekend is no different: 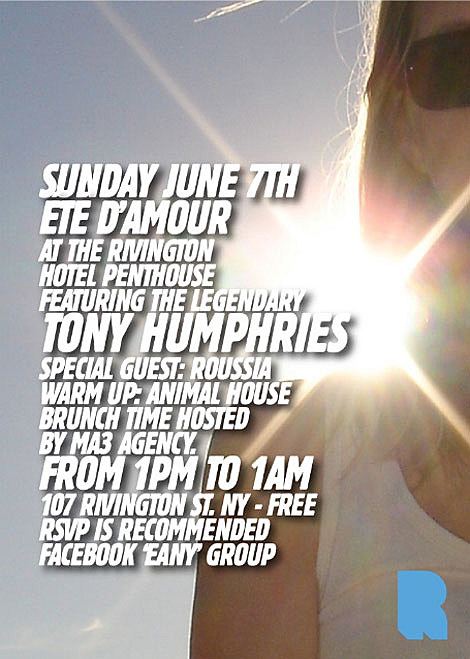 Honestly, I think the move for the rest of summer is to just start off at Sunday Best and end at Été d'Amour. It's too easy and so much fun. Here's part 1 of that equation for this week: 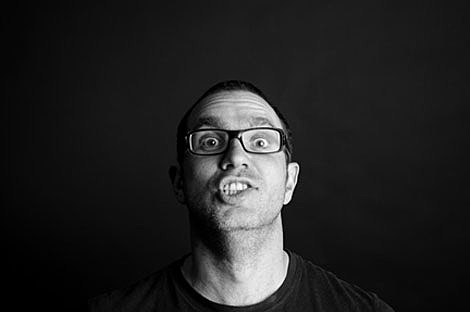 But you should keep your options open! 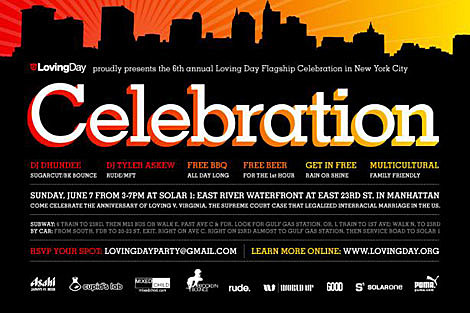 Monday (6/8)
- David Byrne's show at Radio City back in February was like a big dance party. Go see him at the Prospect Park Bandshell for $3!
- Francois K deejays Deep Space at Cielo all night.
- 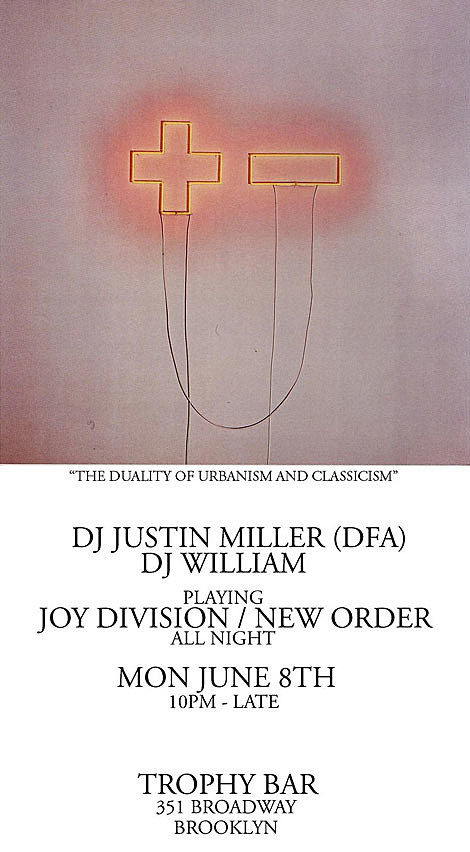 Tuesday (6/9)
- Hornitos and Jelly present "In the Garden of Agave, a Tequila infused dance party"at the Hudson Terrace. "...crazy amounts of booze from 9PM to 1AM but get there early because its first come first served" with Cat Millar, Paul Devro, Blaqstarr, Maluca, and a live performance by The Golden Filter. More info/RSVP here.

Wednesday (6/10)
- People Don't Dance No More is launching their new Wednesday monthly at the Annex. Check the flyer below, full details here: 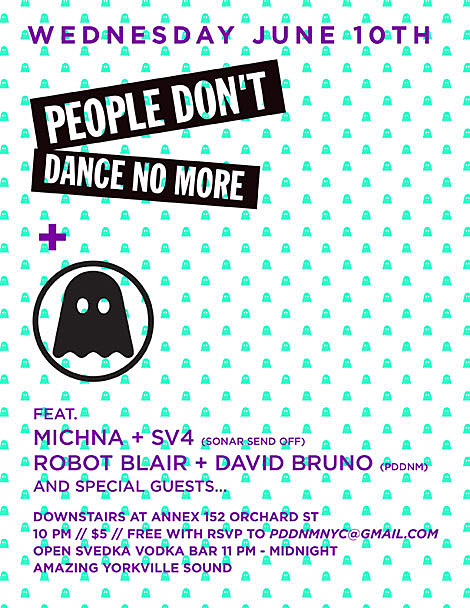 I'm not sure why, but it seems like all of a sudden I've been stumbling upon/friends have been recommending tons of good mixes. One that I found a few weeks ago that I've been really into and highly recommend: a recording of Trevor "Playgroup" Jackson's dj set at Studio B back in February. You can download it (and try to help complete the tracklisting) over at Eamon Harkin's blog.