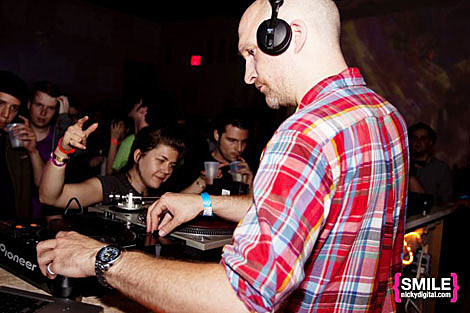 Last week in dance was another busy one as usual. I wasn't around for the weekend but managed to get out a bit before then. On Thursday I caught an awesome set from Fake Blood in Williamsburg, followed by a great night of dancing downstairs at APT on Friday, where Trus'me dropped everything from disco, house, and techno to soul at Disco3000. The dancing continues this week, starting with Thursday and Friday:

New York electro-rock band, the Glass will be at Studio B playing their first live show with the full band since last summer. Check out the great Lego-fied video for their new single "Wanna Be Dancin' " below (which they are sure to play at the show along with more from their upcoming album, currently in the final recording stages).

You can download the radio edit of the "Wanna Be Dancin' " (as well as oldie but goodie "Come Alive") at the top of this post. Full info on the party which includes dj sets from Stretch Artmstrong (who spun a great house & disco set at the Rivington Hotel a few weeks ago) and Dominique Keegan (the Glass/Plant Music) who has been deejaying his share of great, diverse & danceable sets in New York for years.

Free with RSVP to list.studiob@gmail.com.

The Phenomenal Handclap Band's record release party is also happening on Thursday, down at Santos. I have never seen them before but apparently...

They have crafted a sound that is equal parts anthemic, dancefloor-oriented and orchestral, borrowing elements from progressive rock, disco, electro, and psychedelia.

Live, The Phenomenal Handclap Band is distilled to an eight-member powerhouse, an eye-popping spectacle that overwhelms the senses. It pulses with a savage rhythm section that provides the ultimate foil for cascading guitars and electrified washes of organ and synthesizers. Their delirious sermonizing whips crowds into a charismatic frenzy. Needless to say, their live shows are more akin to a spiritual church revival than an actual rock show.

Sounds pretty awesome. Their debut, self-titled album just came out on Friendly Fire Recordings on Tuesday. You can get the CD directly from the label or get the digital version on iTunes.

On top of the live performance by the band there is a lovely bunch of local deejays on the bill including Tim Sweeney, Mike Simonetti, Tim "Love" Lee, Smallchange, and Amir, certain to provide you with all sorts of great soul, funk, house and disco to dance the night away. 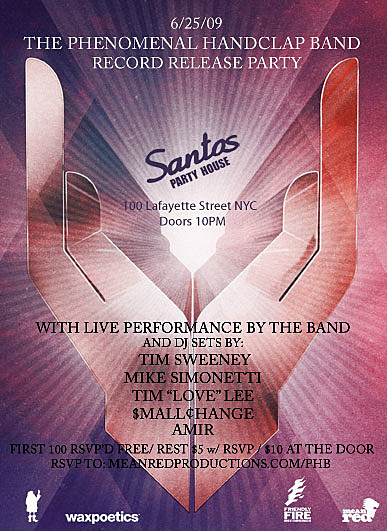 The first Rude Cruise happened while I was away on vacation in May. Hopefully some of you were able to make if out for some dancing on the sea with your favorite bear. If you didn't, the Rude Cruise 2 is happening this Thursday: 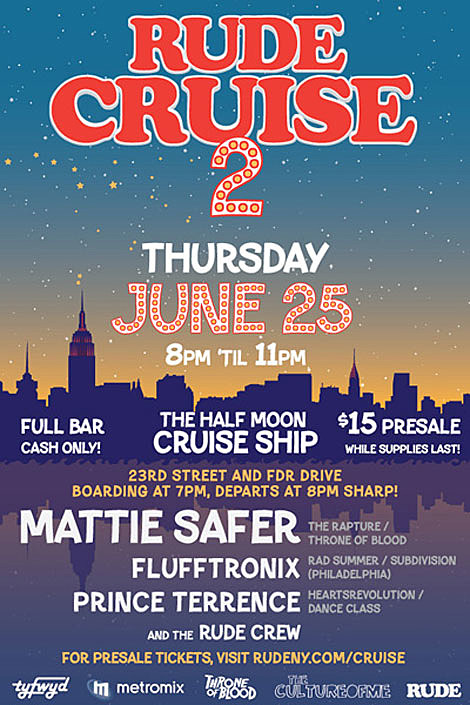 Full info on the line-up, plus tickets available here. If you go be sure to wish Brandon (of the Rude crew) a happy birthday - (Happy Bday dude!).

Also on Thursday (6/25):
- Modular Presents...B-B-Queued Up with Super Family at Studio B
- JAMS at Le Poisson Rouge with Mattie Safer, Nick Catchdubs, and DJ Lindsey.
- Ether is now happening weekly at Happy Ending.
- ddpesh at Oulu.

Detroit comes to New York via Canada's techno master Richie Hawtin. He's deejaying the entire night at Love. Advanced tickets have sold out but limited additional tickets will be available at the door, subject to capacity. If you don't want to chance it there are still advanced tickets available for his set the following night at Love, though he will be sharing dj duties with Ambivalent and Barem. 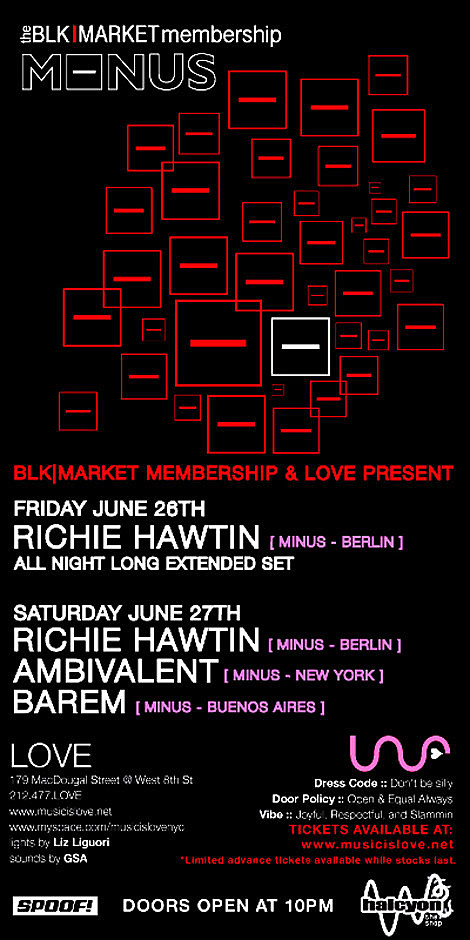 Over in Brooklyn Finger on the Pulse is back at Studio B with another one of their Yikes! parties. This time around they've brought over some great deejays from the UK, including Grum and Hostage. Grum reminds me a bit of the artists from the Valerie collective, with slightly less of an retro 80's sound at times, with some slightly more modern "electro" elements. Download a bunch of different versions of Grum's new single, "Sound Reaction" at the top of this post. The single just came out worldwide on June 15th and is available digitally on iTunes and Beatport with a full-length album to follow in August. 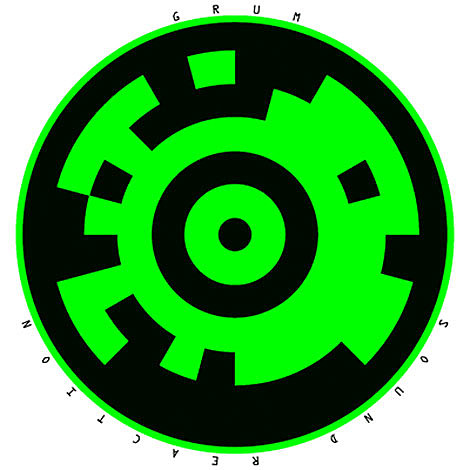 Hostage's sound has been described as "rave-step" which is pretty accurate. Download his track "Special Brew" and his Concrete Mix at the top of this post. Tracklisting and full party info below: 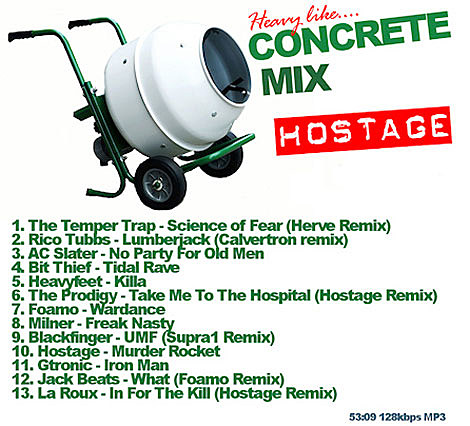 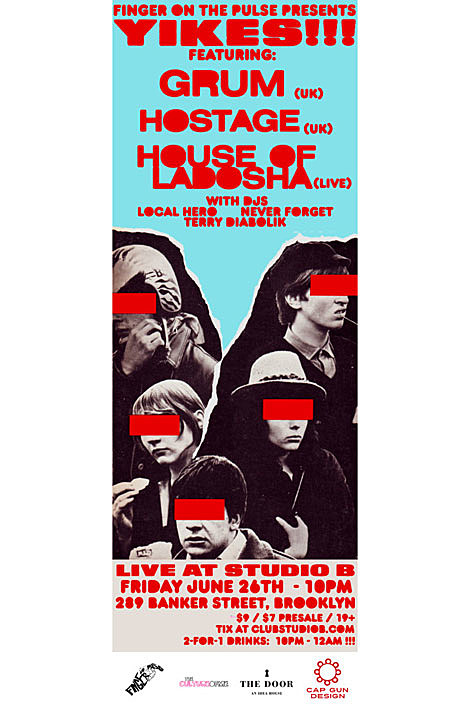 Advanced tickets available here...and we have 5 pairs of tickets to give away! TO WIN A PAIR OF TICKETS TO YIKES AT STUDIO B ON FRIDAY (6/26) email BVCONTESTS@HOTMAIL.COM (subject: YIKES!). Include your first and last name. 5 winners will be chosen at random and contacted. 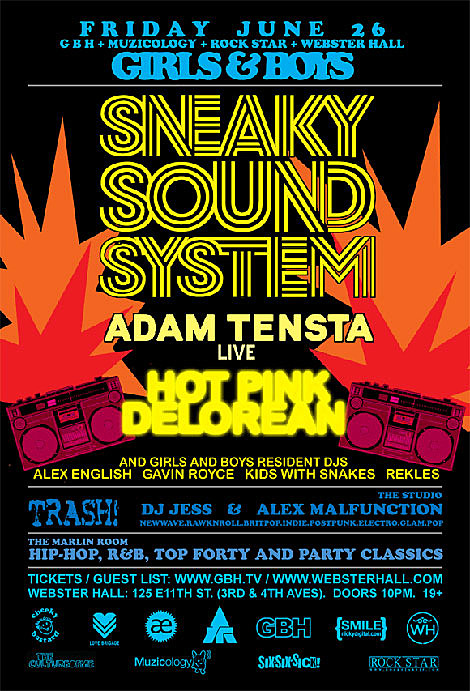 Also on Friday (6/26):
- If you didn't get enough of the Glass the night before at Studio B, catch them at Ruff Club at the Annex doing a 2 man live PA.
- I Love Vinyl at Le Poisson Rouge with Amir, Ge-Ology, Jon Oliver, OP!, DJ Scribe, and the Twilite Tone. 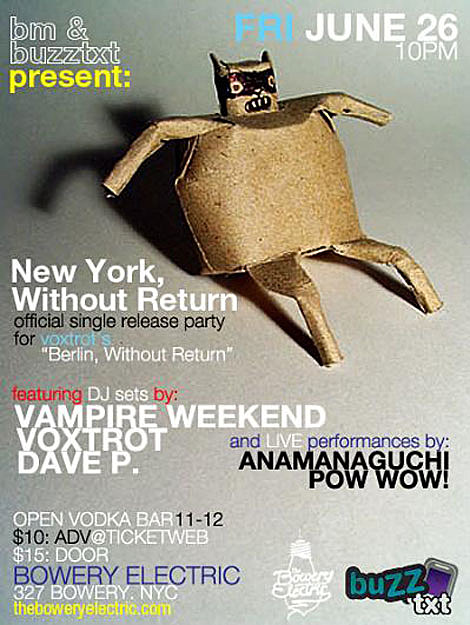 - Off With Their Heads at the CSV Center with Dances With White Girls.
- Dave Dresen is at Cielo

It's another great week for dancing, with even more headed our way this weekend, including the very exciting kick-off of the Beach Party at Water Taxi Beach (LIC) on Saturday. The line-up for this summer looks great, starting off with Claude VonStroke, and we have 2 pairs of tickets to give away. TO WIN A PAIR OF TICKETS TO SEE CLAUDE VONSTROKE DEEJAY THE BEACH PARTY AT WATER TAXI BEACH ON SATURDAY(6/27) email BVCONTESTS@HOTMAIL.COM (subject: BEACH PARTY). Include your first and last name. Two winners will be chosen at random and contacted. More info on the great summer of dancing planned for the Beach Party (and lots more happening this weekend) in Part 2 of the Week In Dance.