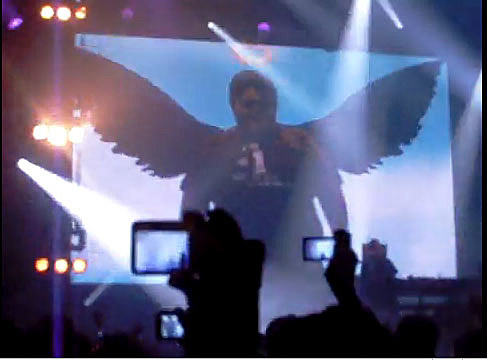 While I haven't made it out to anything happening this week so far, I finished out last week by heading to Terminal 5 to see Fatboy Slim Wednesday night. I arrived a little after 8:30 and Terminal 5 was not full by any means...there was a decent amount of people there, but still plenty of room to walk around. Numbers had only slightly increased by the time Shinichi Osawa began his set at 9. He deejayed just over an hour and the time flew by. It was an hour of recent electro (Soulwax, Bloody Beetroots, Tiga...) that I've heard tons of times before...but Shinichi made it sound brand new. He teased the crowd to death with tracks that were to come, manipulated everything, messed with the levels, cut back and forth, sampled, looped...he did it all. The tracks he chose were all on the heavier side, but what he did to them really broke things up and kept the set from getting monotonous. The entire time you could tell Shinichi was glad to be up there...fist-pumping, smiling, raising his arms. By the time he was done, he had the crowd (which had since filled in) in an absolute frenzy...

...a frenzy which continued as "Pure Imagination" from Willy Wonka and the Chocolate Factory played against a projection of a clock whose hands kept changing time. After a few minutes it was the witching hour and the smiley Brit that is Fatboy Slim was back behind the decks, happy as ever. His intro was some slow verses from "Praise You" before launching into a nearly two hour set that went all over the place. It included decent amounts of some older dance tracks, newer stuff (Nadastrom's "Pussy", Fake Blood's "Blood Splashing", a "sample" from Dan Le Sac Vs. Scroobius Pip's "Thou Shalt Always Kill" repeating "Fatboy Slim, just a band. BPA, just a band."), some of Fatboy's own tracks (Love Island, Right Here Right Now, Fucking In Heaven, Star 69, Renegade Master, Praise You), and some random fun stuff (Gorllaz - "Feel Good Inc." , DJ Kool - "Let Me Clear My Throat", House of Pain " - "Jump Around"). The entire time the screen, which originally showed the clock prior to Fatboy taking the stage, was always changing...from singing mouths, to eyeballs, to a blowfish, to Christopher Walken to a visual of Iggy Pop singing the BPA's "He's Frank" (many figured Iggy might actually perform at the show since he was in town)...the visuals were as varied as the music...though my favorite was when live projections of a very happy, dancing, smiling Norman Cook and reciprocating crowd (that was going apeshit the entire time) were displayed.

While it was not my favorite of the three Fatboy Slim deejay sets I have witnessed (and I'm still not entirely sure why), it was still a good one. It's great to see someone who has been involved with music and deejaying for a number of years, still enthusiastic and smiling about it and able to get an equally glowing reaction from those experiencing it.

Hopefully this weekend you will be able to find someone who makes you happy on the dancefloor. Here's what's happening starting with Satuday (6/27):

As I mentioned in yesterday's post, Richie Hawtin is at Love with with Ambivalent and Barem. Advanced tickets have sold out, but limited additional tickets will be available at the door subject to capacity. Richie will also be at Dubspot's Ableton Live 8 and Akai APC40 workshops on Saturday & Sunday which you can find more info about here.

Saturday night is also the kick off of the Beach Party at Water Taxi Beach in Long Island City. It's the fourth summer the party is happening with resident deejays Probus, Justin Carter, and Eamon Harkin (new to the party this year) and they've booked a great line-up of guest deejays that will have you getting down in the sand (or on the dancefloor) as you take in the excellent view of the Manhattan skyline. They are starting the season off on a great note with head Dirtybird himself, Claude VonStroke from San Francisco, who will be bringing "...a tech-house sound that is inimitable". Info on Saturday's party and the entire summer line-up below: 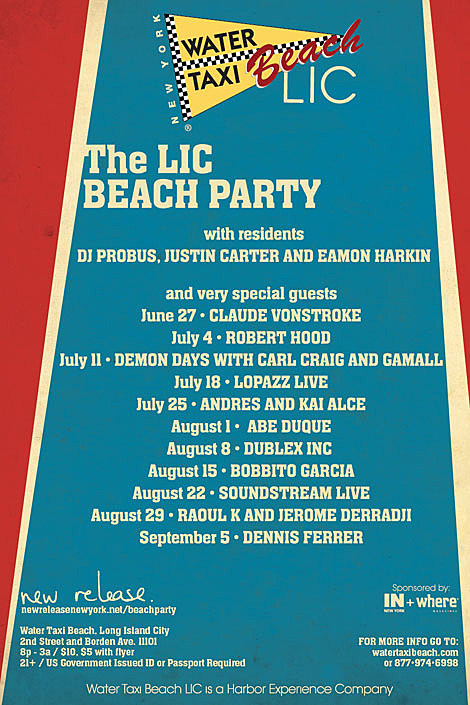 Just South of LIC, the Trouble & Bass crew, plus guest deejays Foamo, Starkey, Udachi, and Little Jinder will be celebrating the release of T&B's Scion CD Sampler V. 25 (out June 23rd) at (the soon to be closed) Studio B: 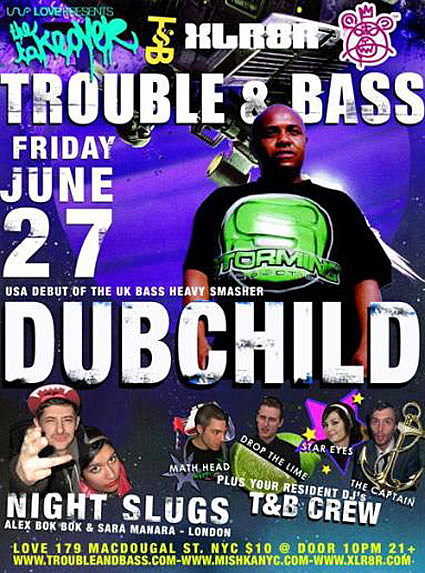 The Trouble & Bass deejays will also be going on tour to promote the cd (dates below). You can download a promo mix they have done to promote the cd at the top of this post (tracklisting below), as well as 2 new tracks from Drop the Lime and AC Slater.

Free admission to these dates with RSVP.

Also on Saturday (6/28):
- Pulled Pork presents Fall on Your Sword at Cameo (inside the Lovin' Cup).
- Winkle & Baltick present: The Love Canal at the Yard: 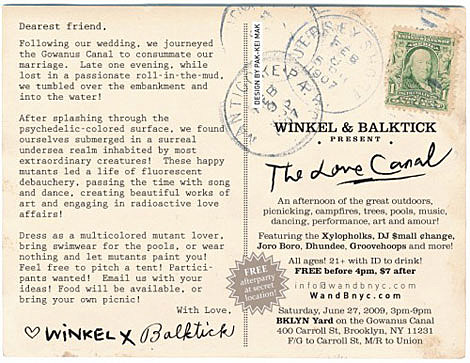 - The Glass, Caroline from Chairlift, and Jorge of Violens will all be deejaying at the Tribeca Grand (RSVP/info).
-Hobos & Mermaids on the High Seas
- John Tejada is at Sullivan Room.
- Save the Cannibals with Onionz. 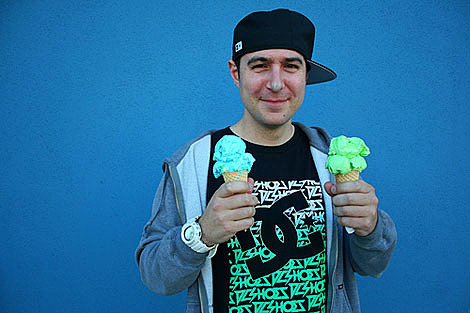 If you didn't get enough of the Dirtybird sound the night before with Claude VonStroke, head over to the the BKLYN Yard for Sunday Best where fellow Dirtybird, Justin Martin will be "...dropping in with his own brand of house, techno and pretty much everything in between." If it rains the party will be moved to the Bell House...which shouldn't discourage you from going! Apparently that's what happened last weekend with all the on and off rain, but the great vibes and music stayed alive despite being inside!

If you're not quite ready to call it a night after Sunday Best, Été d'Amour has a great double-bill with Francois K and Alex from Tokyo. Francois will be deejaying as the sun sets from 6pm - 9pm, with Alex taking over from there, celebrating the release of his and Isao Kumano's debut album Black Ships, which just came out in April on Innervions. 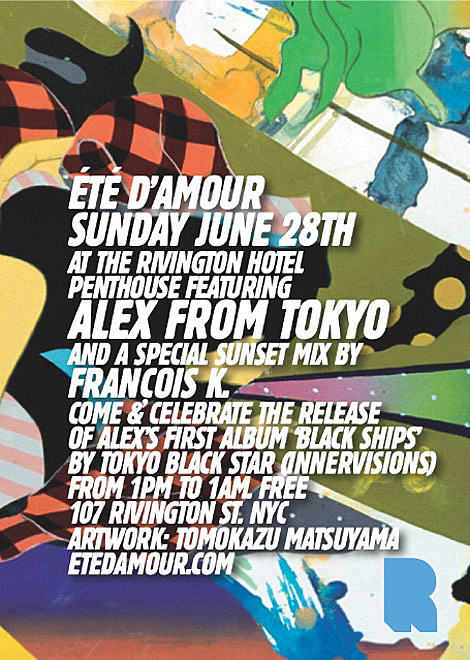 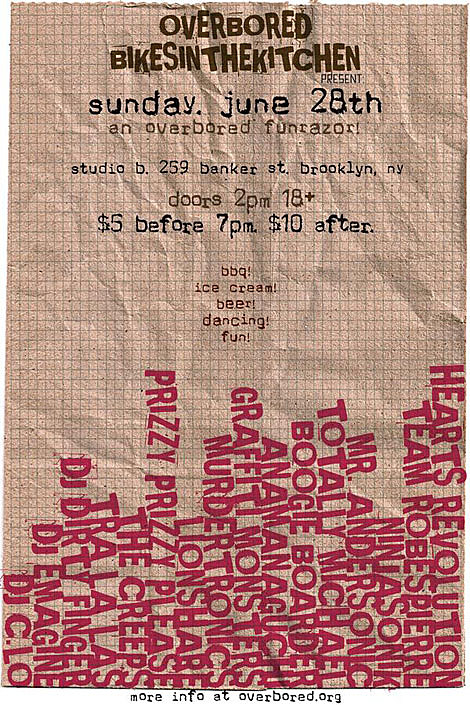 - Broken Teeth with Mathhead, Keith P, Pharaoh, and Ferola at Cameo (inside the Lovin' Cup). 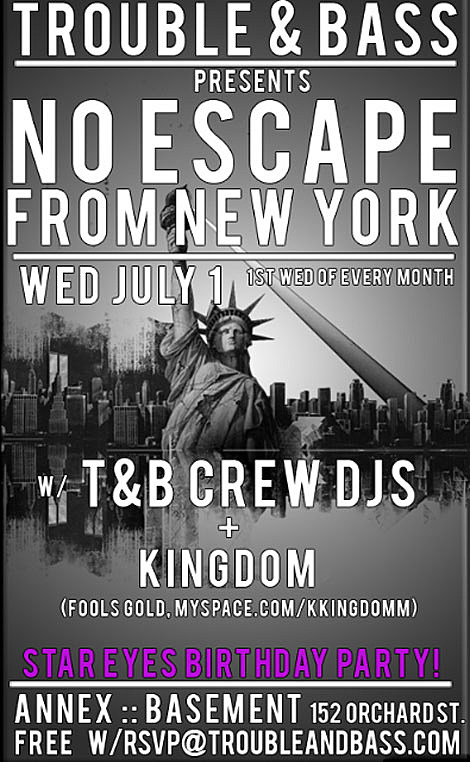 There's much, much more coming up next week, including lots of special parties for 4th of July...but one I don't want you to lose in the shuffle in the meantime is People Don't Dance No More's first boat party of the season! PDDNM residents Robot Blair and David Bruno will providing their usual dose of disco along with help from Brennan Green and Wurst man My Cousin Roy. Nothing like disco at sea! Full info below: 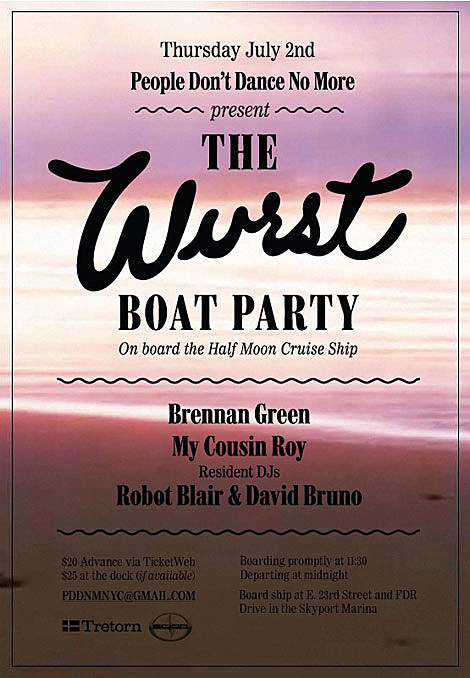