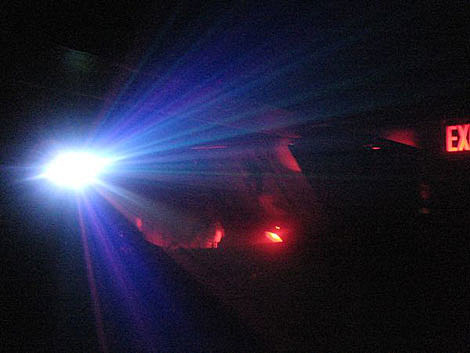 Hopefully you've had a good week in dance so far. Wednesday night I enjoyed some house & disco loveliness from Robot Blair, David Bruno, and Alex from Tokyo at People Don't Dance No More at the Annex. This weekend there's much more house, disco, and otherwise headed our way, starting with Saturday (7/11): 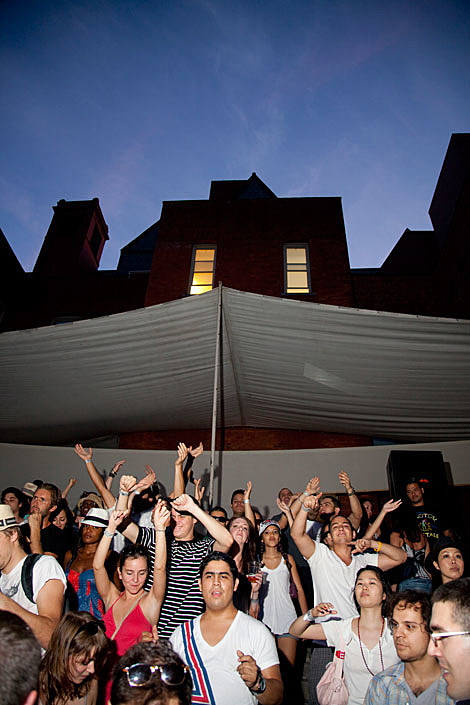 Saturday afternoon is P.S.1's second Warm Up party of the season. Last weekend's kick-off was expectedly packed, but thankfully not unbearable. I arrived arrived around 7, grabbed a beer and headed straight to the packed and moving dancefloor. Unfortunately I didn't do much dancing. I don't know who (out of Reagenz, Move D, and Mark Bell) was deejaying at the time, but I caught their set at a very bassy patch that didn't seem to change much over the course of 30 minutes.

At that point I gave up and decided to walk around and check out "Afterparty", the winning design of the Young Architect's Program. While the general shape of the main structure reminds me a bit of 2007's winning design Liquid Sky, and the "hairy" exterior covering is not my favorite, the design does a good job of creating a cool respite from the sun with many shaded areas & a refreshing mist. Take advantage of it this Saturday after Arthur's Landing, Danny Wang, and MV Carbon & Aki Onda heat up the dancefloor:

Arthur's Landing is a project, an ensemble of varying dimensions and purposes, that performs music written and imagined by the late Arthur Russell....Arthur rode the subway beyond any known limits of the downtown scene, lurked in the back of the hall observing certain musicians, and talked them into collaborating with him. The result was music informed by the social interaction of people with disparate backgrounds, both in life and in music." -issueprojectroom.org

DJ Danny Wang and his highly danceable brand of retro-mod-glitter-party-disco-house will make you want to break out your rollerskates and party like its 1989.

Warm Up Admission
On Warm Up Saturdays, from 2:00 p.m. to 9:00 p.m., the admission fee to P.S.1 and Warm Up is $10.00. Included in this price is access to all exhibitions and to Warm Up. We do not offer special discounts for seniors or students on Warm Up Saturdays. Cash only.

More info on Warm Up, including where to buy advanced tickets and free admission for MoMA members and L.I.C. residents can be found here.

Afterward, Demon Days with Carl Craig and Gamall will keep you dancing at the Beach Party at the nearby Water Taxi Beach:

Carl Craig and Gamall are the two DJs behind Demon Days. Carl is a legendary producer, the most influential from the second generation of Detroit techno. He runs the Planet E label and has remained fresh and cutting edge in every moment of his career. Gamall hails from the UK but has lived in New York for many years, founding the Rude Movements parties in the early 2000s.

Another event on Saturday that looks really interesting is the Essential Music and Art Show. It's happening down in SoHo and features quite a number of deejays (including the legendary Juan Atkins!), live bands, and art in a variety of media. Much more info on info on the event and full line-up here. 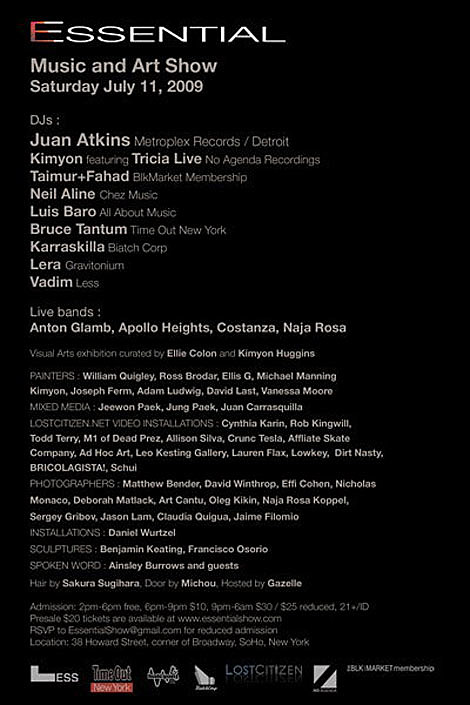 Also on Saturday (7/11):
- Down and Derby Roller Disco is the second to last event happening at Studio B before it closes :( Get in the mood with Eli Escobar and DJ Duane's Roller Boogie Mix Tape over at Nicky Digital. 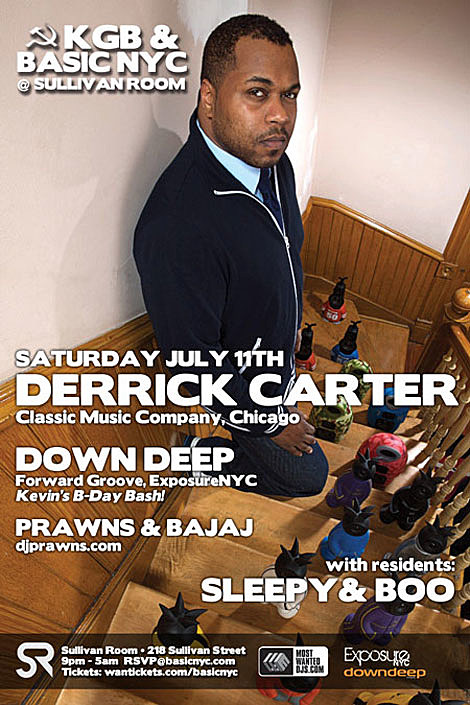 - Cool In the Pool with Pete Herbert and Citizen Kane at Glasslands.
- Nicky Siano deejays Water Taxi Beach at the South Street Seaport every Saturday night. 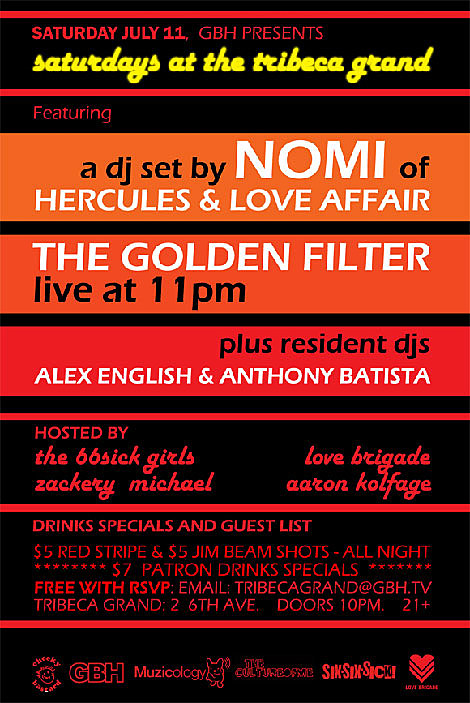 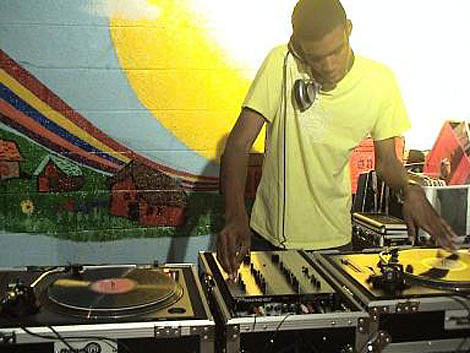 Last Sunday was another lovely one spent in the sunshine, getting down at Sunday Best (which was recently featured in the NY Times) at the BKLYN Yard. Losoul played a good mix, but it was a tad more mellow than I would have liked. This week 17 year-old (yes, 17) Kyle Hall is likely to up the energy as it's the Detroit native's first time playing in New York. Check out the mix he did for Fact Magazine and get ready for Sunday:

I didn't make it to Été d'Amour (which was also mentioned in the same Times article as Sunday Best) at the Rivington Hotel last week which has me looking forward to this week's even more than usual, plus one of my favorite modern disco duos, Runaway (Jacques Renault & Marcos Cabral) are guest deejaying this week's party. Download Jacques' July "Summer In The City" DJ Mix at the top of the post and check out full info on this week's party below.

Also, be sure to mark your calendar for next Sunday's (7/19) party featuring dj sets from Plant Music, including Stretch Armstrong, Eli Escobar, Dominique Keegan, and Kap10Kurt, not to mention some more great line-ups on their way featuring Sole Channel (Mr V & Alix Alvarez), Tony Humphries, Eric Duncan, and more tba. 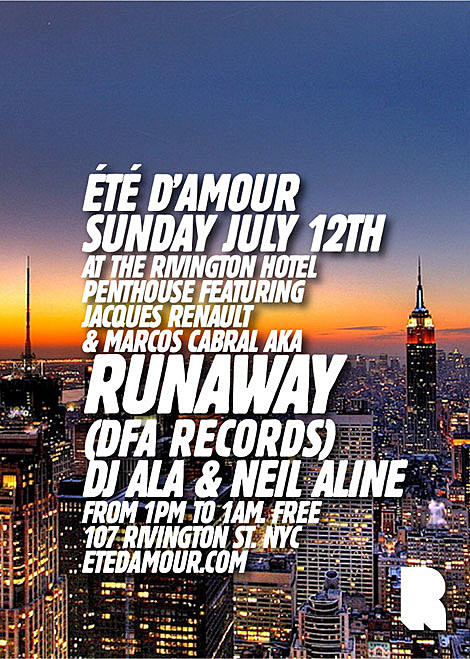 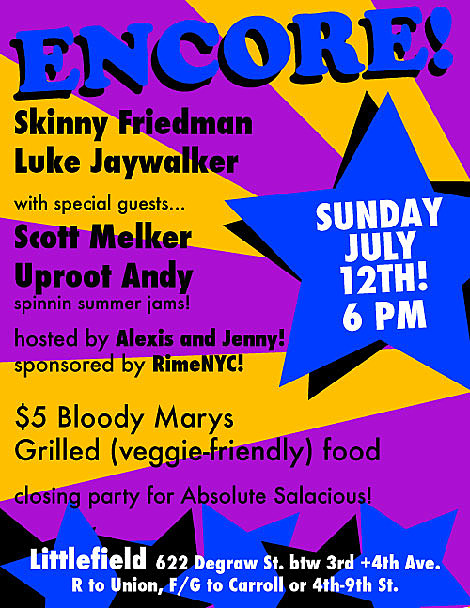 - Brendon Moeller is at Water Taxi Beach (South Street Seaport).
- Not dance-related, but still awesome: a screening of The 400 Blows (a great film!) at Cine-brunch at Le Poisson Rouge.

Monday (7/13)
- Francois K is deejaying Deep Space at Cielo.
- Benji B is at the Hudson Hotel. You must RSVP. 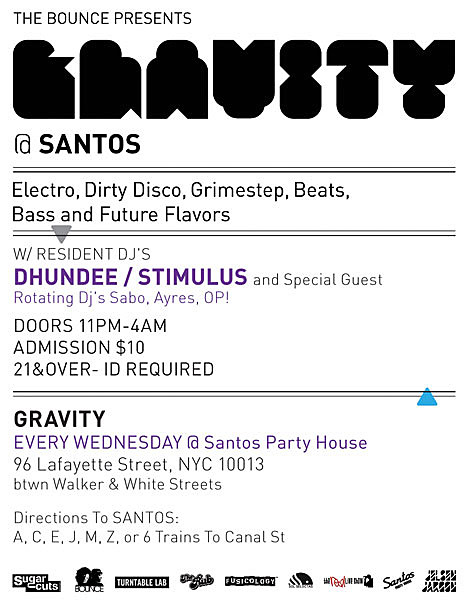 There's been a lot of buzz about Simian Mobile Disco lately. Tracks from their new album Temporary Pleasure have been leaking. Artwork has been revealed and I'm really looking forward to the album's release (and SMD's dj set at the Williamsburg Waterfront) next month. In case you haven't seen it, here is the video for one of the new tracks "Audacity of Huge":