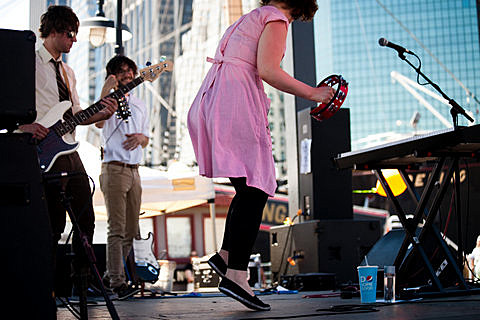 Brooklyn Vegan hasn't met a festival to which we haven't wanted to add one more party. So in addition to the official Brooklyn Vegan show at Music Hall of Williamsburg and two heavy showcases being presented by BV-BBG -- all of which are Saturday night -- there's now a fourth BV-related Northside Festival show, Sunday night (6/27) at Coco 66. This one's being presented by me, as a Brooklyn Vegan's This Week in Indie/Sound Bites and features North Highlands, The Luyas, Savoir Adore and Gray Goods. Tickets are $10 or you can get in with your Northside Festival badge.

If you read/skim TWII on a regular basis you've heard of most of the bands. North Highlands have only been together for about a year but they've really come into their own recently, making gentle, engaging orch-pop that is really rather magical when they play live.  They were just great when they played the Sound Bites Lunchtime Series earlier this month at the Seaport, and I couldn't be happier to have them play this too.

Not that I don't want you to stay at Coco 66 all night, but if you can't make their 11PM set, North Highlands play earlier Sunday night at Cameo; and they also play Saturday afternoon at Spike Hill as part of The L Magazine's "8 NYC Bands You Need to Hear Right Now" showcase which is free -- no badge necessary.

This is The Luyas only Northside show, though the band are down from Montreal for three shows, including Rooftop Films tonight (6/24) and tomorrow night (6/25) at 929 Broadway (same building as Party Expo, but 2nd floor) with Adult Themes. I am super-psyched to have them on the bill.

Savoir Adore are one of my favorite local bands of the last two years and their album, In the Wooded Forrest, made my Best of 2010 list. The record just got released in the UK and the band is heading over there in July for their first-ever tour there. They are also a great live band.

Savoir Adore also play the night before (Saturday, 6/26) at Brooklyn Bowl as part of the Cantora Records showcase that also includes BRAHMS, Gordon Voidwell and The Tony Castles.

Gray Goods is the new band from Ryan Brown, formerly of Soft Pack cohorts Browns. (In fact, Gray Goods' drummer is the little brother of Soft Pack guitarist Matt McLoughlin.) You can check out the Feelies-esque "Color Divide" at the top of this post which is from the new Singles EP on 1928 Recordings. Gray Goods will also play later Sunday night at Bruar Falls.

I think that's a damn good show. Come by if you can. Set times are below....