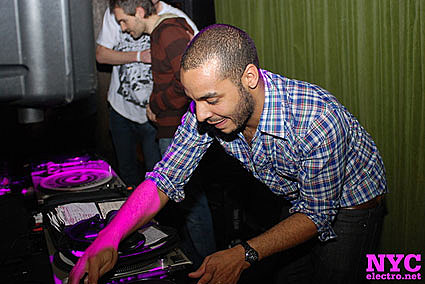 Despite there being loads of great dance events this past weekend partying with the Degenerates at Hiro on Thursday left me in no state to do much else. Tommy Sunshine was playing a shockingly early set that was in progress when we arrived at 11:30. After an hour of unidentifiable (by me), but great jams and disco sirens (has anyone else noticed that they are back in a big way?), Tommy surrendered the decks to Moby who had the packed room getting down like it was 1995, dropping mainly old school tracks with the perfect balance of new stuff thrown in to keep it interesting. While many people left after Moby's set (unfortunately a common occurrence at these parties), there was still a good number of people wise enough to stick around for DJ Mehdi's electro-fied set. He kept everyone out late and getting down to a great mix of current electro from Simian Mobile Disco to Boys Noize to the Chemical Brothers. Overall, a night of serious fun.

Glad I took it easy for the rest of the weekend because the one coming up is insane - tons of events you can't miss.

Thursday (tonight - April 10, 2008) the Fool's Gold Tour II kicks off with its first night at Hiro. The first tour hit New York back in October during CMJ and featured A-trak, DJ Mehdi, Kavinsky, Kid Cudi, the Cool Kids, and Kid Sister. The party was a lot of fun. DJ A-trak and Kid Cudi are back again, but this time around Fool's Gold has joined forces with Dim Mak, adding Sinden, Steve Aoki, and Sammy Bananas to what looks to be a great bill. 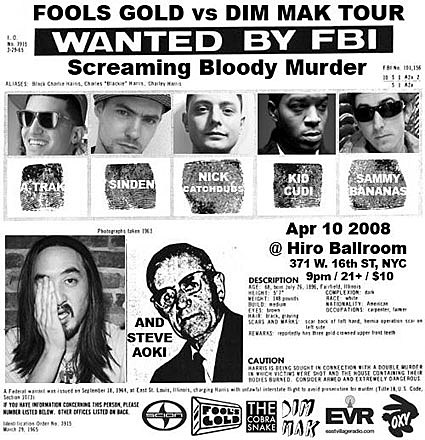 Tonight the Pink Skull Record Release Party is also happening at 205. More on Pink Skull and their new album here.

Also, tonight: Moby again, but this time live and in NJ.

To be continued soon....