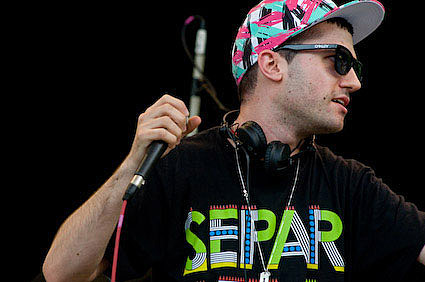 With all there was to choose from last night I hope you were able to find something to get you moving on the floor. If not, I'm sure some of the deejays and bands in this post can help out with your weekend...

One who will definitely have you moving it "Cross the Dancefloor" is Treasure Fingers whose single has been making people do just that since it dropped on Fool's Gold in August, as have some of the great remixes, like Lifelike's which you can download from RCRDLBL. While you're there be sure to check out Fool's Gold's RCRDLBL page, as it is the featured label this week, offering an exclusive download or stream every day. As I mentioned at the end of yesterday's post, Treasure Fingers will be deejaying the opening night of a new party along with South Rakkas Crew, and Designer Drugs called Good Fridays which will happen on the first Friday of each month at Le Poisson Rouge . 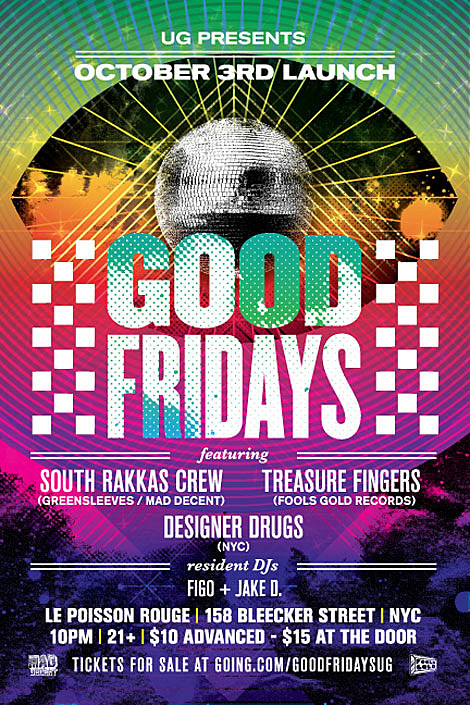 Click here to get a $10 advanced ticket and check out some future line-ups. $15 at the door.

I didn't realize it until just now, but the Fool's Gold crew is all over the city tonight (Friday). Label co-founder, Nick Catchdubs is hosting his, Jubilee, and Ayres' weekly Flashing Lights party at Public Assembly. Download a mix the three of them put together at the top of this post.

This week's guest is Ursula 1000 who deejayed here quite a bit last week. Anyone see him at Hiro or APT? He's also been busy working on his new album among other things:

Two tracks away from finishing the new studio album. It's coming out very bouncy and cosmic with a touch of fidgetry and some sorcery! Also did an "official" remix for Yo Gabba Gabba for their new season. Also, keep your eyes peeled for remixes for All Good Funk Alliance, Misty Roses, Thunderball, Fagget Fairys and Pomomofo (all out now--somewhere).
AND a new online mix is coming imminently with some of the latest tracks that have been making me go koo koo.

As always, Flashing Lights is free. Here's what they have in store for the rest of October: 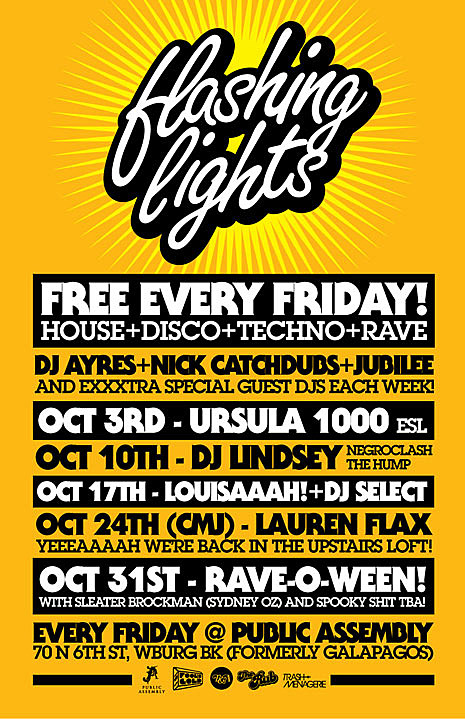 While that party's going on, the other co-founder of Fool's Gold, A-trak, will be tearing it up at Webster Hall (which is now home to the Studio) with Berlin's Boys Noize on their Attack of the Unibros tour. I've seen A-trak numerous times and his sets have always been really good, varied mixes of very new electro, hints of hip hop and classics, and French housey goodness. Check out his Fabulous Fall Top 10 below:

As for Boys Noize, there was a long time when if you asked me who my favorite dj was at the moment, he would be the answer. I first saw him deejay during my first trip up to Montreal and was absolutely blown away by the electro he was playing, as well as his great remixes of Michael Jackson and Depeche Mode. Then I saw him deejay at least five times over the course the next year (which I realize is a lot) and things started to get a bit stale. I was starting to know which songs he was going to transition into - it was bad.

I am hoping that since I haven't seen him since December of last year, his set Friday night will be totally fresh. That last time I saw him things were headed in a better direction. His set included many more current tracks, as well as alot of tracks off of his new album at the time, Oi Oi Oi. With his label, Boys Noize Records, really taking off over the past few months he should have some great new tracks to choose from. Download his remix of Sebastien Tellier's "L'amour et la Violence" at the top of this post as well as a recording of his set at this year's Sonar Festival in Barcelona. Also be sure to check out the Boys Noize Records blog for label news, videos, and free downloads. 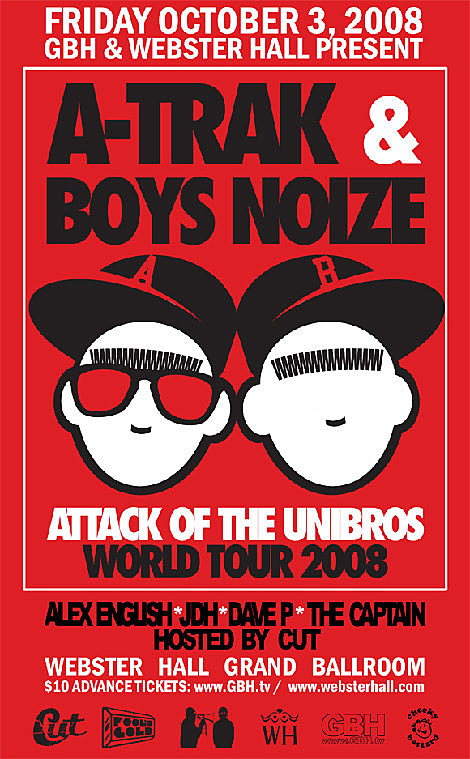 For something more shoegazey, atmospheric, and funky, check out Nick Warren at Cielo. 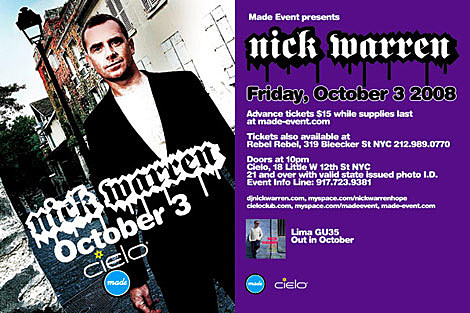 Check out his September 2008 chart below and download his Cosmic Space Mix at the top of this post.

I'm not sure exactly what it is, but something about their music just doesn't grab my attention (editor's note: What?!?!? .. :-)). I've heard great things about them live (which after watching some footage on youtube, I'm kind of starting to understand), but haven't liked any of their music enough to make me actually want to go see them. Anyway...to each his own. If you like 'em, they're at Terminal 5 for two nights and there are still tickets available for both Friday and Saturday's shows. You can check out the rest of their fall tour dates here, and read more about the opening band, Growing, here.

Saturday night you can also catch Hot Chip deejaying their own after party at Le Poisson Rouge along with the UK's Drums of Death performing live at midnight. 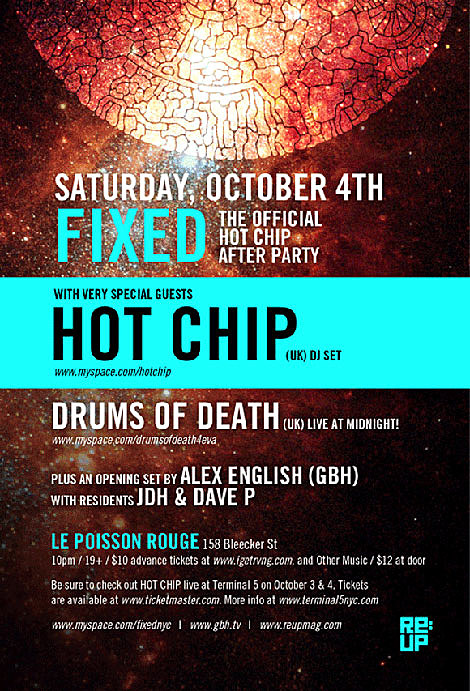 If you couldn't get enough of the Trouble & Bass crew Thursday night, the Captain and Star Eyes will be deejaying the Staggstreet.com launch party at Savalas: 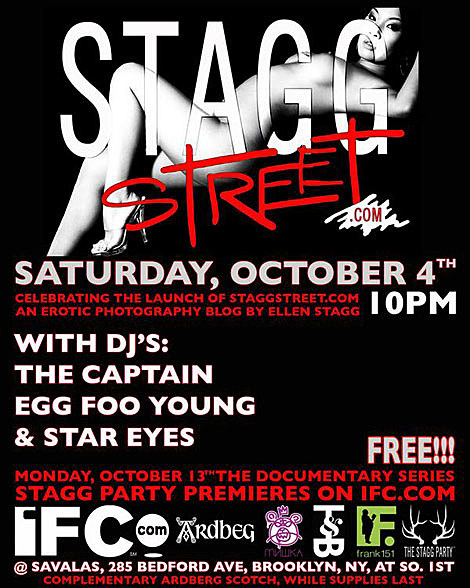 Also...in case you were wondering, the Juan Maclean show originally scheduled to happen at Bowery Ballroom Saturday night has been switched to Saturday, October 18th.

Which brings us to Sunday...here's what happening, heading into next week:

Sunday (10/5)
- Kenny Dope and Wayne Williams are at Cielo.
- Nicky Siano is at Santos.

Tuesday (10/7)
- A new monthly, CU Next Tuesday, is happening at Santos on the first Tuesday of every month. Flyer, line-up, & more info here.

Wednesday (10/8)
- Special Disco Version is on the calendar at Santos, but none of the details have been posted yet.
- Turntable Lab's Roctakon celebrates his 30th birthday at Love with Mike Dunn.
- Louie Vega is at Cielo. 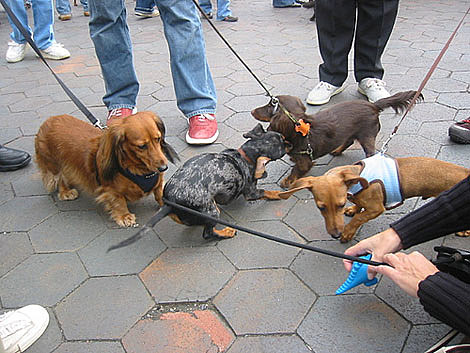 Every now and then it's good to do something that's not music-related. If you can make it out of bed by a reasonable hour, this Saturday afternoon I highly recommend heading to Washington Square Park for the Dachshund Octoberfest. Yup...weinerdogs! Basically a lot of people in New York converge upon the Park with their weinerdogs...there are literally hundreds of them. A lot of them are dressed up in costumes and it's a pretty hilarious and fun way to spend an afternoon outside. More info here.