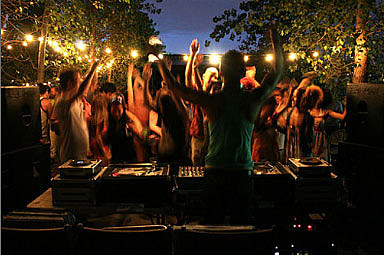 Before I get into what's going on this weekend I want to bring a remix to your attention. "Hey Boy Hey Girl (Soulwax 2 Many DJ's Remix)" by The Chemical Brothers is available for free here. I've only listened to it once so far and am still figuring out what to make of this marriage between two of my favorite artists. Despite that, I think it will be devastating once someone drops it in the middle of a set on a good, loud system....I can't wait. Now on to another thing I can't wait for...the weekend -

Saturday night (August 23rd) things really get moving. Good luck trying to decide what to do:

During the day and going into early evening there's Warm Up at PS1. This week Fimic, Artists' Association of Finland, and Ministry of Education are hosting. The line-up includes:

Check out the video for Op:L Bastards' "Scorpius": 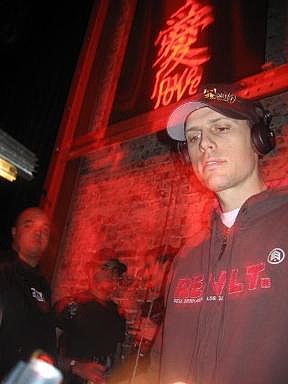 If you're already in Long Island City the easiest move from there is to head to the Beach Party at Water Taxi Beach. This week Troydon, originally from South Africa, now living in Brooklyn, is deejaying. Expect a lot of house (both deep and classic). You can stream a few recordings of some of his live sets here. Even if you're not that into this type of house the party is still worth checking out as the resident deejays Justin Carter, Probus, and Todd Makinen play a healthy mix of everything.

There are also quite a few events happening in Manhattan, a couple of which are in the 30's:

One is Famous Friends, a new-ish dance party that seems to be going strong. There is a great electro line-up for Saturday featuring dj sets from Le Castle Vania (who has a ton of free tracks for download on his myspace), The American Dream Team, and Kap10kurt as well as OCD Automatic, Bradley D, and VDRK. All the details are on the flyer. Download some mixes from The American Dream Team and OCD Automatic at the top of this post. 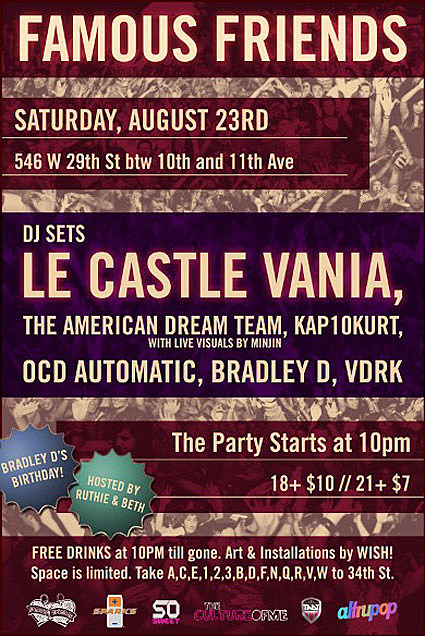 Another event in the neighborhood is Popoff at Rebel with Dominique Keegan (1/2 of The Glass) and Tittsworth. I think I've gone on enough tangents for you to know how great I think Dominique's sets are. Check out some previous weeks in dance to download some mixes you might've missed. As far as Tittsworth goes I'm still just getting familiar with his music. His electro/b-more album Twelve Steps was recently released on Plant Music (Dominique's label). You can download one of the tracks from the album, "WTF" (featuring Kid Sister and Pase Rock ) via RCRDLBL as well as several others. There's also a mix he did (the John McCain Experience) which you can download at the top of this post. 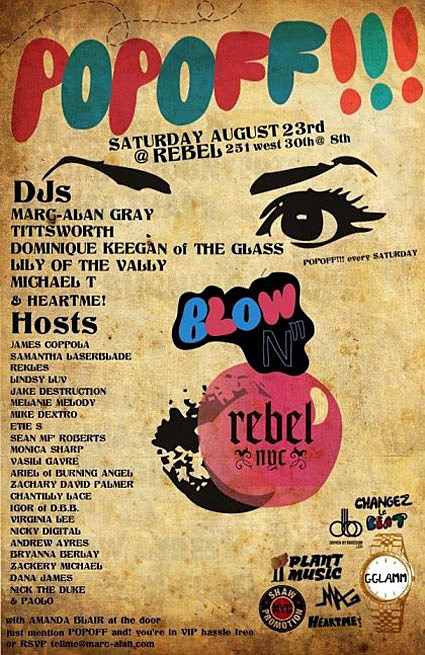 Mention Popoff at the door to get in free or RSVP - tellme@marc-alan.com.

Eamon Harkin and James Friedman continue their successful Prime Time party series (and celebrate their birthdays!) at Love this Saturday with Todd Terje - all about the edits. Download his promo mix at the top of this post. 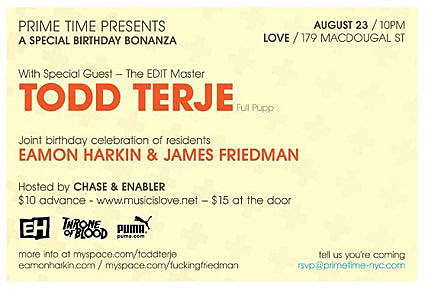 One last option for Saturday night: 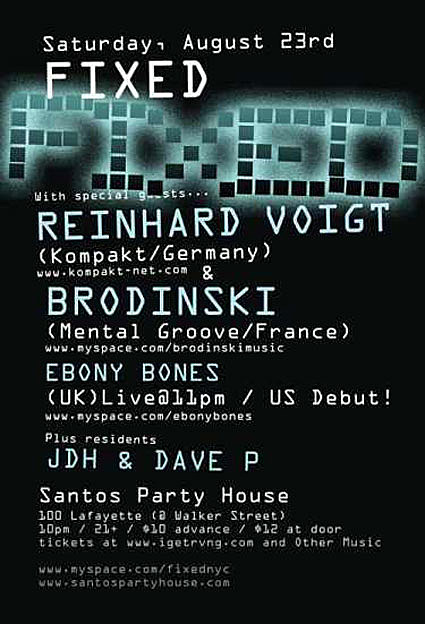 Fixed is throwing down at Santos with an early (11pm) live performance from Ebony Bones, a UK artist making her US debut (and also playing Sunday's Pool Party). Santos describes her as:

...in the vein of MIA and Santogold meet Erykah Badu, Bjork, and Kate Bush in a bizzaro disco world throwdown

Brodinski will be deejaying afterward followed by a live set from Reinhard Voigt at 2am. I saw Brodinski start what I imagine was a strong set at Studio B back in May. Unfortunately I never got to hear where it went. The place cleared out right after Sebastian finished his set (which was just before Brodinski went on) and I could only stand dancing to Brodinski's tunes (as good as they were) on the empty floor for so long. Hopefully this time around the Frenchman will be able to showcase his selecting and mixing skills for what is sure to be a healthy Saturday night Santos crowd. Download his Smokemashine C mix at the top of this post (check the tracklisting below) and be sure to check out his blog, Smokemashine for some more mixes, charts, and other goodness.

I'm not too familiar with Reinhard, but from what I've heard so far I can tell you he's more on the minimal side, but in a good way. Give 'em a look-up on Beatport to get a better idea of what's up.

Sunday (August 24) I recommend relaxing at the Yard during the day and staying for the dance madness that ensues towards the end of the evening. This week's guest deejay is Joakim (who was also at APT on Friday, anyone go?). Sadly this is the second to last Sunday Best (though there are some other events coming up there)! If you haven't gone yet it's really a great way to spend the day and end it with a bang without being too tired for work (boo!) on Monday.

If you're in a disco mood you can also hit up Santos for Nicky Siano's Sunday residency. 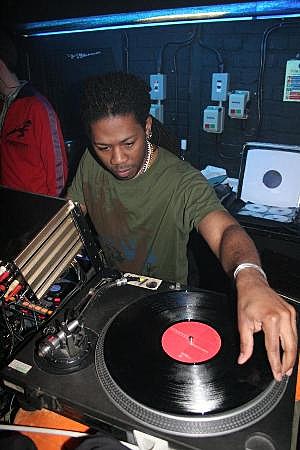 That's it for the weekend. Usually by Monday I am completely done for, but if you've got energy to spare head over to the Hudson for the Giant Step party series happening there every other Monday. This week dj/producer Ron Trent will be dropping what is sure to be one of his legendary, deep sets. It's an early party from 7-11pm and you must RSVP.

Have fun...I'm sure it'll be the next week in dance before we know it (it always is). And try to make it to some of these outdoor events! You're going to wish you had once (f-ing!) winter comes and you'll have to psych yourself up to leave your warm apartment even to go see your favorite deejay.