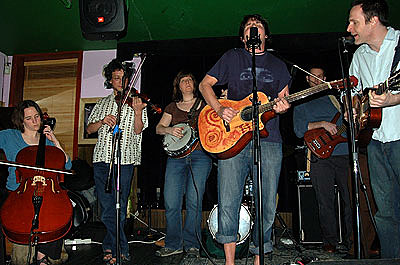 Cross-Pollination was created by Jay Goettelmann and Wesley Verhoeve, the founders of creative collective Liberated Matter, with the hope of bringing artists together in a unique way. They came up with the concept of pairing two artists together, with each playing a 45-minute set, followed by a collaborative set in which both performers share the stage. These special sets are 'one time art' and have included everything from bands joining in on each others songs, collaborating on covers, and co-writing new songs for the event.

Back in 2005, Jay and Wes spoke with BrooklynVegan about their series...

What is your most memorable Cross-Pollination experience?

Wes: Hmm, I'd say the Kimya Dawnson/Paleface collaboration with a whole set of newly written songs was very special. Seeing Jaymay hold a note for about a full minute once during her performance was quite spectacular as well.

Jay: For me it was probably one of our big alumni shows where Casey Shea and Jeff Jacobson (of the Undisputed Heavyweights) did a rendition of the entire second half of Abbey Road. Or when Jason Trachtenburg ended his show in punk style, knocking the mic over and trying to bash these wooden flame decorations with his guitar.

Wes: There's a lot of memorable moments, but to highlight a few: Frightened Rabbit and The Brother Kite's performance was phenomenally packed and amazing. Casey Shea and Wakey!Wakey! covering Dick In A Box mere days after it was on TV was a big hit with the crowd. Cloud Cult playing with great intensity to a fire-hazard stuffed upstairs. Dave Deporis and My Brightest Diamond were so delicate and beautiful, then still at the Apocalypse Lounge. Jason Trachtenburg also played there early on and destroyed the stage and the wall behind the stage at the end of his set in front of a baffled audience. It was amazing, sort of a nebbish version of Terminator.

Cross-Pollination is currently streaming a 5th anniversary mixtape with new and exclusive tracks by Dawn Landes, Takka Takka, Twi the Humble Feather, Jaymay and others. You can stream it or download it below. They posted a similar mix in 2007 for their 3rd anniversary.

Both bands playing tonight are series regulars (The Bloodsugars even played the Cross-Pollination's 4th anniversary bash last year, video below.) They're both at other local-music celebrations this summer too. Dinosaur Feathers will be playing Saturday, May 16th at Park Slope's Bar 4 as part of the weeklong Local Correspondents Festival hosted by the venue. The Bloodsugars will play a Northside Festival show at Public Assembly on June 14th.

Cross-Pollination 5th anniversary mixtape (streaming and downloadable), with track listing, and all upcoming shows, below...