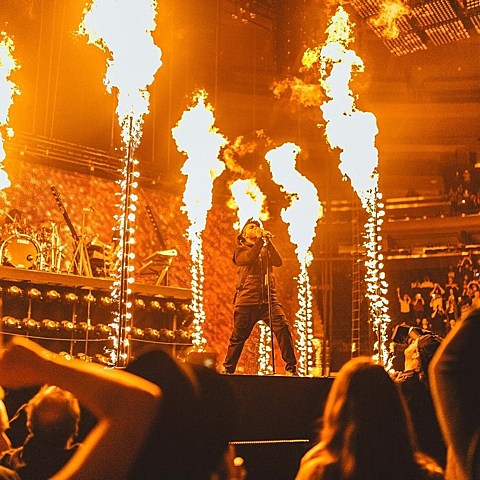 The Weeknd has come a long way since his early days as a "mysterious" artist making hazy mixtapes. Now he's got two #1 hits off his new album ("Can't Feel My Face" and "The Hills") and he's in the midst of a three-night run of arena shows in NYC. (Four if you count the nearby Prudential Center show he played last week.) This week's run kicked off on Monday (11/16) at MSG, and Noisey's review of the show talks about his ascent to fame:

Part of the reason that Tesfaye's been able to make the leap into superstardom while holding onto his indie cred is that while he's made adaptations in order to up his pop appeal, he hasn't compromised his core identity-"that nigga with the hair / singing bout popping pills, fucking bitches, living life so trill," as he puts it on Madness's "Tell Your Friends." That includes ballsy moves like making his big, Max Martin-assisted pop number that represented a real make-or-break moment in his career into a catchy song about cocaine addiction, or getting the line "When I'm fucked up, that's the real me" on the Billboard Top Ten, or releasing a special edition PAX vaporizer as a tour souvenir.

...But even Tesfaye's newer and much more mainstream fans seem totally happy to let him be himself. They don't need him to learn complicated choreography or bring along a bunch of backup dancers or tamp down his pyrotechnics-loving headbanger side. If anything, he's bringing them to his own eccentric level. Partway through his set last night he brought out a rendition of "House of Balloons / Glass Table Girls" from his debut mixtape House of Balloons, and on the choruses he had an entire sold-out arena singing along with unrestrained joy to the Siouxsie and the Banshees song it samples. From where I was sitting, it felt like we were all winning.

That career-spanning set included everything from "High For This" (the first song many of us heard from him) through his cover of Michael Jackson's "Dirty Diana" through "Wicked Games" through of course "Can't Feel My Face" and "The Hills," and many more. Check out the full setlist and a view videos below.

The run continues at Barclays Center tonight (11/18) and Thursday (11/19). Like at MSG, Travi$ Scott (whose recent debut album features The Weeknd on "Pray 4 Love") and Banks will open. Tickets for both are still available.

He also plays a few of the mostly-lame Jingle Ball fests around the country, including Z100's in NYC at MSG on 12/11 with Fetty Wap and more (sold out). And he plays New Year's Eve on Miami Beach. Updated dates are listed below.

The Weeknd @ MSG - 11/16/15 Setlist (via)
Real Life
Losers
Acquainted
Often
High For This
The Party & The After Party
King Of The Fall / Crew Love / Or Nah / Professional
The Morning
House of Balloons/Glass Table Girls
Tell Your Friends
The Birds, Part 1
Shameless
Earned It
Dark Times
As You Are
Angel
D.D. / In The Night
Can't Feel My Face
Prisoner
The Hills