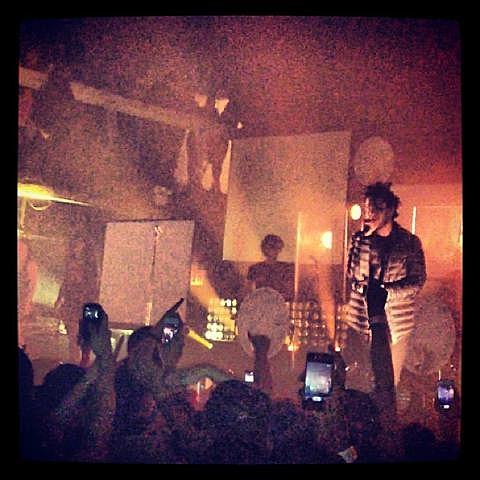 And with an hour-long set full of fan favorites ("Wicked Games," "High For This," "Next" and encore "Outside") that demand abrupt, full-throttle falsetto, Tesfaye's voice was in fine form, effortlessly leaping across octaves with plenty of room for soulful melisma. He also appeared to have overcome some of the stage fright that kept him largely stationary during some of his first-ever gigs earlier this year at Coachella and New York's Bowery Ballroom, the latter of which found Tesfaye's voice notably strained. [Billboard]

The Weeknd (aka the project of Abel Tesfaye) kicked off his 3-night NYC run, the final US dates on his tour, before he returns home to Canada, last night (10/25). Last night's and tonight's shows were/are at Terminal 5 and on Saturday (10/27) he plays the Bronx's Paradise Theater. Like last night, the two upcoming shows are both sold out.

The Weeknd plans to compile his three mixtapes that he dropped in 2011 and release them as Trilogy on November 13 via his new home at Universal Republic. In addition to the material from the mixtapes, the release will also feature three bonus tracks. It won't, however, feature the non-album cut, "Enemy," that he posted to the internet last night after the Terminal 5 show. You can listen to that track and watch a video from the T5 show below.