The Weeknd at Coachella 2012 (more by Dana (distortion) Yavin) 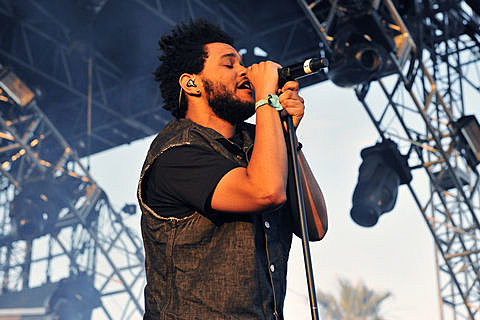 Canadian R&B singer The Weeknd, whose tour includes two Radio City shows in October (tickets), just released the second single from his upcoming LP, Kiss Land. It's an almost-8 minute track titled "Belong To The World" that prominently samples Portishead's "Machine Gun," which he apparently did without permission.

I think it's a load of bollox. When someone asks to sample you and you refuse they should have the respect as a fellow artist to not use it. We usually give sample clearance to tunes we like. its got fuk all to do with money! As most of them are hiphop artist that are skint.

Eventually Geoff ended by saying, "Feels like I'm being used to promote the track now... I'll shut up now." You can watch the video for "Belong To The World" below.

In sort of related news, 90s UK trip hop act Morcheeba (no offense Portishead!) have announced a new album, which like Tricky's latest (which features a member of the Antlers), features some special guests: Chali 2na of Jurassic 5, James Petralli of White Denim, Rizzle Kicks, Ana Tijoux and Nature Boy (not to be confused with Natureboy). Head Up High, their eighth studio album, is due for release on October 14. Morcheeba hop the pond for a couple of California shows in September and then tour Europe later in the fall.

Tricky will also tour behind his new album this fall.

The Weeknd - "Belong To The World"

Get More:
The Weeknd, Belong To The World, Music, More Music Videos