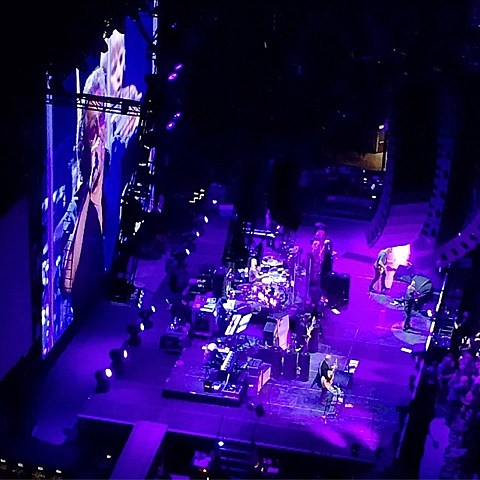 The Who have so many classic songs, that even if you think you are sick of them, they sound amazing when an arena full of people are singing them in unison. Some examples of the massive hits played were "Who Are You," "The Kids Are Alright," "My Generation," "Pinball Wizard," "You Better You Bet," "Baba O'Riley," "Won't Get Fooled Again," and "Eminence Front."

The Who didn't just play the same old boring setlist (which from my research looks like it varies a little bit for each show). They packed the set with hits, but they also played some lesser known tracks such as the mini-opera "A Quick One (While He's Away)," "Slip Kid," "Bargain," "Sparks," "Join Together," and "I'm One." [According2G]

The Who continued their 50th anniversary tour at Barclays Center last night (5/26), their first NYC stop on the tour and second in the area (they played Long Island's Nassau Coliseum last week). Like the other shows on the tour, it was filled with hits, and you can check out the full setlist and watch videos of them playing "My Generation," "Pinball Wizard," "The Kids Are Alright" and "I Can't Explain" below. Their tourmate Joan Jett opened, and her setlist is below too.

The Who and Joan Jett's tour has one more NYC show this week: Saturday (5/30) at Forest Hills Stadium (tickets). It returns to the area in the fall for shows at Prudential Center on 10/25 and MSG on 10/27 (tickets).

Check out our pictures from the Austin stop here. Videos and setlists from Barclays Center below...

The Who at Barclays Center - 5/26/15 Setlist: (via)
I Can't Explain
The Seeker
Who Are You
The Kids Are Alright
I Can See for Miles
My Generation
Behind Blue Eyes
Slip Kid
Bargain
Join Together
You Better You Bet
I'm One
Love, Reign O'er Me
Eminence Front
A Quick One (While He's Away)
Amazing Journey (with "Captain Walker" snippet from "Overture")
Sparks
Pinball Wizard
See Me, Feel Me (with "Listening To You" and brief "Pinball Wizard" reprise)
Baba O'Riley
Won't Get Fooled Again

Joan Jett at Barclays Center - 5/26/15 Setlist: (via)
Bad Reputation
Cherry Bomb
Do You Wanna Touch Me (Oh Yeah)
You Drive Me Wild
Light of Day
Love Is Pain
The French Song
Different
I Love Rock 'n' Roll
Crimson & Clover
I Hate Myself for Loving You

Filed Under: Barclays Center, Joan Jett, The Who
Categories: Music News
Comments
Leave A Comment
Back To Top