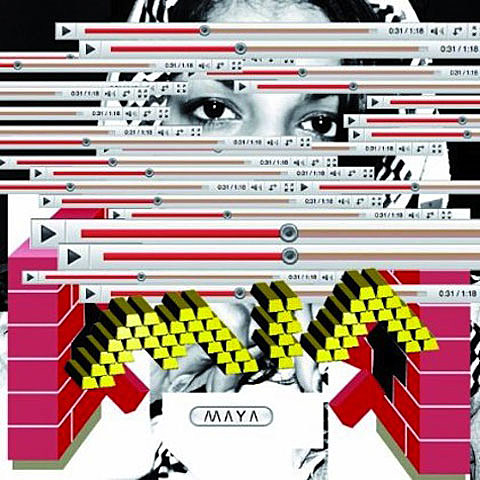 The most combustive song on M.I.A.'s third album isn't loud or chaotic. Built on a mildly ominous, off-kilter beat -- plus an incessant shoosh like a bag of coins being shaken -- it bloops along with the grace of a janky PopCap game. But the sneakily titled "Lovealot" is perhaps the riskiest gambit yet from the 32-year-old artist born Maya Arulpragasam.

"Lovealot" alludes in part to the iconic, viral photo of a pistol-wielding Russian/Islamic couple -- the husband, a terrorist leader killed last year by police, and the wife, a teenager who tried to avenge his death by suicide-bombing the Moscow subway (at one point the song was titled "A/bdurakh/man/ova," after the girl's surname). Merely 20 seconds in, M.I.A. spits, suddenly, "Like a Taliban trucker eatin' boiled-up yucca / Get my eyes done like I'm in the burka," and then, "Like a hand-me-down sucker throwin' bombs out at Mecca," and on and on. What's more, when she purrs the line, "I really love a lot," she stretches the last two words so they sound like "I really love Allah." [Spin's review of 'Maya']

For the past week or so, as you probably heard, M.I.A., like Courtney Love before her, has been "feuding" with NYTimes' writer Lynn Hirschberg (a "ginger") over a not-so-favorable but not-SO-bad-either profile (cover story) on the singer in the NYT Sunday Magazine (a key part of which aims, successfully or not, at M.I.A.'s "terrorist" cred/claims). It all started when M.I.A. tweeted Lynn's phone number after the article was posted on NYTimes.com. The most recent development is a song (above) posted on the NEET Records blog, accompanied by unedited parts of the interview (part of which concerns truffle fries) (how M.I.A. got audio of her own interview is unclear).

M.I.A.'s shows this summer include the headlining slot at NYC's HARD Fest at Governors Island on July 24th. Her album's tracklist is below...