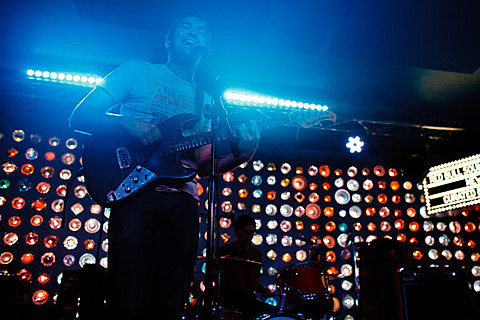 Portland, OR trio The Woolen Men will release a new EP, titled Rain Shapes, via Loglady Records in early 2015. You can check out a song from that, "Rain Shapes" -- a driving number in the band's catchy understated style. It premieres in this post and you can watch it below.

Woolen Men, who played the BV-presented Red Bull Sound Select show back in April, will be on a short East Coast tour starting next week, including a few NYC shows. They'll play one of the final shows at Death by Audio on November 6 with Lame Drivers and a mystery TBA headliner. Any guesses on who that might be? That Red Bull show was headlined by Woods (and Woodsist have put out Woolen Men records)...hmm.

They'll also play Shea Stadium on November 11 with Hamish Kilgour, and Cassie Ramone, and finally Cake Shop on November 12 with Journalism and Lures.