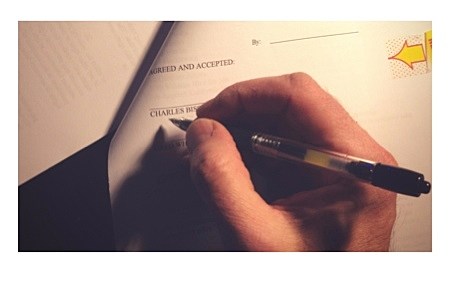 The Wrens have been talking about a new album (to follow 2003's The Meadowlands) for a long time, and they've now signed to a label for the first time in years to release it. They posted the above picture to their website and wrote the following:

...for the first time in I don't even know how long (years at this point!), we all four got together. The occasion? Well, I realize it's not big news in any sense except to us, but after 25 years as a band and for the first time in 20, we, as they say, have inked a deal. Pens were handed out presidentially. Morning beers were clinked together. The devil wrung his hands in delight & vanished in a smoke puff, laughing.

Honestly not being coy but promised not to reveal details, pending a more official announcement from both parties. But wanted to say at least something, partially 'cause we're all super happy about it.

And partially because pretending to do this for a job (or whatever this is), there are none of the usual office trappings or career mile-markers along the way. No promotions; no HR; no office holiday party or company phone; heck, no office or company; no paid vacation; well, no 'pay' really...actually the more I write, the more I'm clearly describing a hobby. Anyway, so partially for myself (I signed a binding legal document! On letterhead!).

And partially to have something even a little more concrete than my usual "work continues nightly" to show that...this record is actually happening. And nearly done.

So we don't know what label it is yet (Barsuk? Polyvinyl? Sub Pop? Merge?) but at least now this new album is feeling that much more real.

Revisit a track from The Meadowlands below...