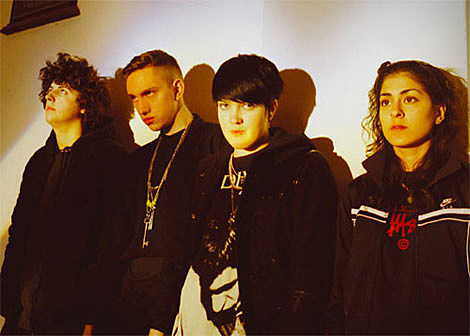 The XX, four young, sullen-faced youths dressed in black, have that alluring band-as-a-gang aura about them. They spent their youth at south-west London's Elliott School (fellow alumni: Four Tet, Burial and Hot Chip) obsessively tinkering with instruments in the music room before signing a deal and self-producing their album in their record company's back office.

At first glance, you'd expect them to make basement rock'n'roll songs serrated with guitar feedback, but they're more interesting than that. For starters, they're fronted by a boy/girl combo - Romy Madley Croft (guitar) and Oliver Sim (bass) - whose interplay lends their debut an intimate tension. Along with bandmates Baria Qureshi (keyboards/guitar) and Jamie Smith (programming/samples), Croft and Sim craft languid, sparsely arranged love songs that recall atmospheric 80s acts such as the Cocteau Twins and Mazzy Star. Better still, they betray their south London roots: gentle, plaintive melodies are framed by minimal beats that nod to dubstep and R&B. [Guardian UK]

The xx's debut record, conveniently called xx, will come out October 20th via Young Turks/XL Recordings (just to keep it straight: the xx is releasing xx on xl).

In August the band is visiting NYC for a bunch of shows. As previously announced, they're opening for School of Seven Bells' South Street Seaport show on August 14th, but they're here at least a week before that. Their first NYC show comes on August 7th when they play the Mercury Lounge with Free Energy, Sean Bones and Edward Sharpe & the Magnetic Zeros (tickets). Then, they play Bruar Falls on the 8th, Monkey Town on the 10th, Pianos on the 12th, and Music Hall of Williamsburg with Friendly Fires on August 13th. I wouldn't be surprised if they add even more.

The video for the band's song "Crystalized," with all tour dates, below...