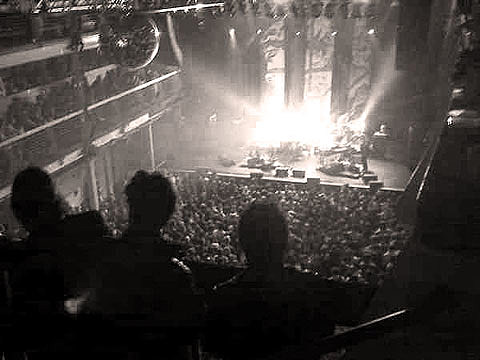 Hot Chip headlined their first of two shows at Terminal 5 in NYC last night (4/22). The xx, who could probably headline the venue themselves, opened the show. I don't have more pictures this time, and I wasn't at the show, but I found this amusing letter:

I went to see The xx and Hot Chip perform at Terminal 5 tonight. The xx were lovely, as usual. Jamie Smith totally rocked the MPCs as he always does; he even worked in some recognizable trance beats at the end of one song. Anyway, we all know how I love The xx, so let's move on.

This was my first time seeing Hot Chip, and as long as I'm in New York, this will probably be my last time seeing them. THEY were great. I mean, I still don't totally get why so many people lurve them so much. I especially don't understand how anyone in their fucking right mind would enjoy listening to "Ready for the Floor". That has to be one of the most obnoxious songs of my life, but Hot Chip are such awesome performers that I didn't totally mind enduring the song. My favorite Hot Chip songs are the ones with a more overt R&B/hip-hop swing, like The Warning (which they did not play), but whatever. Anyway, they seem like cool dudes and their performance was great.

So why will I never attend another Hot Chip concert in New York? Because 90% of the Hot Chip crowd were utter fucking douchechills. Men, women, young, old, bros, non-bros - they were the most annoying crowd I have EVER EVER EVER come across. I am pretty tolerant of most crowds; I once had to endure Disturbed fans when I was 16. BUT GODDAMN, NY Hot Chip fans... you guys are assholes. You had no knowledge of concert etiquette. Some of you were big The xx fans, too, and you almost ruined that set for me, but my love for them prevailed.

Here's the thing: you don't fucking mosh to Hot Chip, ok? You don't fucking pogo a go go here. You dance. You don't mosh, you don't crowd surf, you don't try to start a circle pit. Fuck you, and stay away from The xx next time they're in town. I don't need to hear you yelling "OMGZ JAMIE I LOVE YOU," you fucking teenies.

Seriously, congrats. Out of all the concerts I have been to, you are the worst crowd ever.

The xx DJ'd Le Poisson Rouge after playing Terminal 5. Their new video for "Islands" is viewable now. Tonight they play Baltimore and then DJ afterwards too.

Here's a great video of Hot Chip at Coachella: