The xx at Radio City in September (more by Amanda Hatfield) 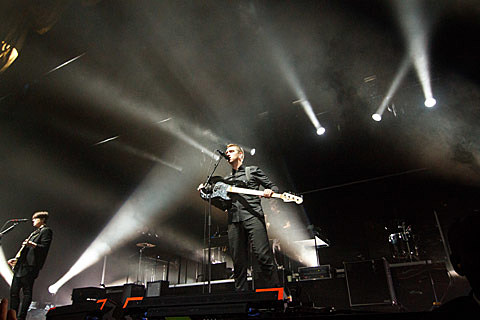 The xx are doing a pretty unconventional residency in NYC, as Pitchfork reports. They'll be playing 25 shows at Park Avenue's Armory's Wade Thompson Drill Hall from March 19-29, and each one only holds 40 people. $55 tickets are/were available here via internet, phone, and in person.

The xx has made big noises across the pop landscape while barely raising their voices above an ear-grazing whisper. Their poignant, minimalist music is a tribute to their unflinching drive for originality, which has ensured their position as one of the most in-demand bands of our time.

After headlining major festivals and huge outdoor venues like Coachella and Lollapalooza and sold-out runs at quintessential venues like Radio City Music Hall, the Mercury Prize-winning trio comes to the Armory for a much more intimate experience. Defying perceptions of a traditional concert, the xx creates a site-specific environment to delve into uncharted levels of depth in their sound where dark and light collide as the memory of the outside world falls away. This uniquely voyeuristic and deeply personal setting is the perfect oasis for the band to perform, while in the process redefining their music and their relationship to the audience that surrounds them.

The Armory thanks Burberry for their support in this production of The xx.

Public support has been provided to by the New York City Department of Cultural Affairs in partnership with the NYC Council.