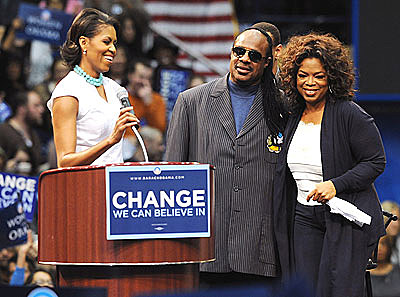 "Inspired by the grassroots movement created by Barack Obama's historic presidential run and his call for the change Americans need, artists supporting Barack Obama teamed up to create a new CD that taps into the campaign's universal themes of hope, unity and change. The disc, titled Yes We Can: Voices of a Grassroots Movement, includes a collection of artists from across genres, including such renowned performers as Stevie Wonder, Sheryl Crow, John Mayer, Adam Levine from Maroon 5 and John Legend. Through their musical contributions, the artists seek to mobilize voters in the final stretch before the November election. Many of the artists involved will also be volunteering their time to promote voter registration."

Coming soon: a blog post by Kanye West asking why he wasn't mentioned in that official CD description paragraph and a CD by the McCain camp that gets a higher Pitchfork rating than Obama. 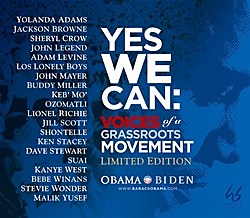