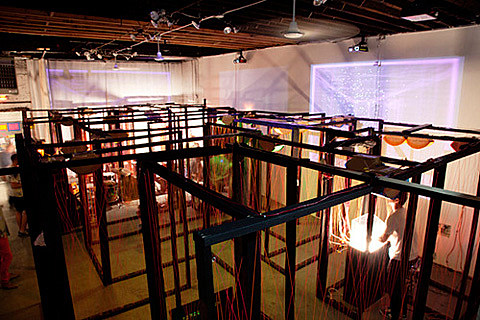 The You Are Here Fest, aka The Maze, is back, happening tonight (5/13) through May 17 at SELECT Art Fair at 548 22nd St. (Previous iterations of The Maze happened in 2012 at Secret Project Robot and 2009 at Death by Audio.) If you're unfamiliar, here's how they describe it:

"You Are Here" is a multi sensory installation and living sculpture. It is activated by performers, musicians, dancers, and visitors. Audience members arrive at "You Are Here" with the intention of catching a particular presentation, but intentions are frustrated and transformed by the labyrinthine construction, all held together by a plethora of performance artists. Artists and audiences alike are invited to question the expectations that arise around performance in the context of community. This year's incarnation of You Are Here brings a new design for SELECT fair's roof install. Dozens of performers hold together a maze comprised of industrial plastic mesh banners. Musical guests and audience members stand within the structure.

The Maze is designed and brought to you by Trouble and you can take a CGI virtual walkthrough via a video below. Musical programming was curated by Trans-Pecos and Terrible Records, and starts tonight with a private preview party featuring Lee Ranaldo, Arto Lindsay, Blondes and more. The rest of the fest is open to the public and here's the lineup:

The 2015 You Are Here Festival happens as part of Frieze Week NYC at SELECT Art Fair and tickets to the Fair are on sale now.

Detailed schedule of The Maze's musical programming, below...

Maze at SELECT - digital model from Lawrence Mesich on Vimeo.

YOU ARE HERE FESTIVAL lineup

JUNGLE PUSSY - There's something special about 22-year-old New York City rapper Junglepussy. For starters, she stands nearly six-feet-tall and sports a head of bleached dreadlocks and then there's also her polarizing stage name. But it's her presence -- refreshingly genuine and completely enchanting

JAMES CHANCE - A key figure in No Wave, Chance has been playing a combination of improvisational jazz-like music and punk in the New York music scene since the late 1970s. Chance differed from some of his no wave compatriots by possessing (and demanding from his band) a certain level of musical skill and talent. His music can be described as combining the freeform playing of Ornette Coleman with the solidfunk rhythm of James Brown, though filtered through a punk rock lens.

Patrick Higgins - Higgins has composed works for some of the nation's leading ensembles, ranging from chamber orchestra works, percussion cycles, and string quartets to smaller ensembles and soloists. He has scored works for television, museum exhibitions, and films both short-form and feature-length. Higgins plays guitar and composes in ZS, hailed by theNew York Times as "one of the strongest avant-garde bands in New York."

VICTORIA KEDDIE - Vicotria Keddie, most known for her work in ESP TV doing live video composition and her own video work, is also an accomplished analog electronics musician and composer. On this night she'll be sharing some of this recent work.
Projections by Nuit Blanche NY

LOST SOULS ENTERPRISES DJ SET - Responsible for some of New York's most choice and off the radar minimal techno and house parties.

SICK FEELING - Classic hardcore with noise at the fringes, led by the legendary Don Devore (Collapsing Scenery, Amazing Baby, etc...) Brought to you by Terrible Records.

PSALM ZERO - Melodic vocals over spindly, serrated guitars and billowing synths, all producing huge pop hooks that are just slightly incongruous enough to keep the whole thing from feeling like an actual pop track, or a metal track for that matter