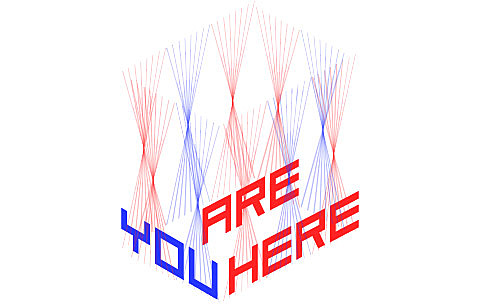 Some of you may remember art installation The Maze which took over Death by Audio back in Fall 2009 and at at Chashama's Visual Arts Space in 2009. Well it's back, as the You Are Here Festival has returned for a month-long residency at Secret Project Robot Gallery in Bushwick (389 Melrose St) from July 12 - Aug 4.

Just like in previous years, the festival will include a "gigantic life size maze", and will host a grip of performers on Thursday - Saturday during their stay at the space. Thursday's kickoff event (7/12) features Miho Hatori's New Optimism, ZS, Bachanalia, Ann Liv Young and DJ JG Thirlwell of various Foetus incarnations. Other performers throughout the month include Xeno and Oaklander, Hubble, Mick Barr, Dan Friel, Zs, VAZ, Amen Dunes, Extra Life, Diamond Terrifier and many many more. Full schedule for "You are Here" is below including details on the art exhibitions at the space.

The festival is also readying a limited mixtape, featuring unheard/rare tracks from many of the performers scheduled for the event. Get a copy at the shows and at the You Are Here site, and check out "Hubble Potatoes" by Hubble which appears on said comp below.

In related news, both Diamond Terrifier and Hubble will perform at Zebulon tonight (7/10), joining Excepter and Hagfish & Poet Lounge. The show is part of a month-long residency durated by Diamond Terrifier (Sam Hillmer of Zs) on Tuesdays at the venue. The remainder of shows will feature a Patrick Higgins electro-acoustic set with Sleng Teng, and Tetryl Red on 7/17, ATM, with Psychic Reality, and Chuck Bettis on 7/24, and the final show on 7/31 with Talibam!, Violet Raid, Sun Watchers, and GADDFJXR.

Full details on the fest are below. The group is currently seeking funding for a Berlin edition in September 2012, contribute if you can.

YOU ARE HERE FESTIVAL 2012
PERFORMANCES IN THE MAZE
8:00pm to Late
every Thursday through Friday, July 12 to August 4, 2012
at Secret Project Robot
389 Melrose St, Brooklyn NY

Nick Doyle (July 12 - Aug 4)
"Interface Accolade"
an interactive sculpture centered around the ideas of interface and reactionary experience. Its two central consols promote the interweaving of the viewer and the space through its activation. This responsive piece becomes an improvisational tool within which the participants can experience a creation and transformation within the space. Hand-controlled glove-boxes, lighting, sequencing.

G Lucas Crane + Party Lab (July 12 - Aug 4)
sound artist, performer, and musician whose work focuses on information anxiety, media confusion, and recycled technology. Using a combination field recordings culled from the underbelly of the contemporary sonic media landscape and homemade electronic instruments, oscillators and broken machines, he creates compositions and performances as a reaction to, and illustration of, our information detritus choked times.

Babycastles (July 12 - Aug 4)
an ingredient of a rhythm of indie, furthermore unprofessional, game designers from near the universe. Babycastles is hiding games in treasure chests around the maze.

Watercourses (July 12 - Aug 4)
artist Pam Garner's moniker for here work with liquid. Pam will be leaving potions in secret vessels throughout the maze on random nights in random but hidden places. All potions are digestable, so drink up!