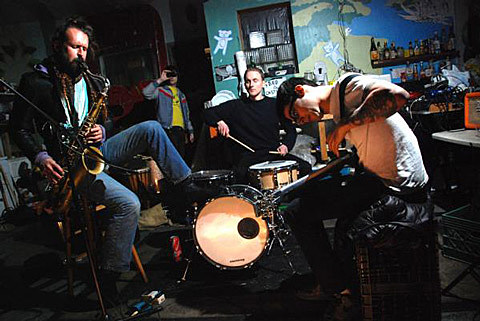 Avant-garde band Zs are celebrating their new LP New Slaves (out now on Social Registry) with a show at Knitting Factory in Brooklyn tonight (5/11), and they've brought along a pretty amazing cast of characters to pad the show. Kicking off at 8PM, the Brooklyn band will be joined by noise collective Excepter, guitar god Mick Barr and synth band Silk Flowers with river-dredging vocals, in addition to Dutty Artz DJs Matt Shadetek & Lamin. Tickets are still available.

It's one of two NYC shows on the calendar for Zs, with the second taking place June 26th at Issue Project Room with david linton: bicameral research sound & projection system.

New Slaves marks Zs' first full-length LP on Social Registry, after dropping their Music of the Modern White EP on the label last year. The band recently debuted the track and a video for "Acres of Skin". Download that track above, and check out its video below.

The band also sent along an exclusive new remix of their song "Diamond Terrifier" done up by Zebrablood of Excepter (who play their show tonight). The result is a 12-minute dancefloor-from-hell take on the breathy 13-minute drone-like original; don't listen alone with the lights off.

More on what's in the works for Zs and their sax player/community-mover-and-shaker Sam Hillmer (straight from Sam's mouth) - including the last concert of the Real Bushwick/Bushwick Real series on June 4th with Janka Nabay, nine11thesaurus and more, and another Maze, which he says is being planned for fall 2011, and will be constructed of chain link fences outside - is posted below...

Zs is collaborating with Japanese camera and photo company Powershovel around the first japanese release of Zs music and a possible trip to japan in the fall!

charlie ahearn is completing a documentary short about teen rap radicals nine 11 thesaurus. i am only peripherally involved, but i'm super psyched about it.

social registry will be announcing the new representing nyc record by nine 11 thesaurus, ground zero generals, in the first week of june. beats by tim dewit (ex. gang gang dance) and matt mehlan (skeletons), it's going to be so fly!

charlie looker of extra life and i are collaborating on a compilation of sorts, due out shortly before 2011, it's going to be bananas!

the next maze is going to take place out doors in early fall 2011 and will be made of chain link fences... there will be wire sculpture, mirrors, and light... people complained that it was hot and that they couldn't see, so, there... it'll be outside and everything will be visible.

speaking of trouble, zs will be incorporating the projections of my collaborator in trouble, laura paris, who is also my wife and the mother of my child viloet paris-hillmer...