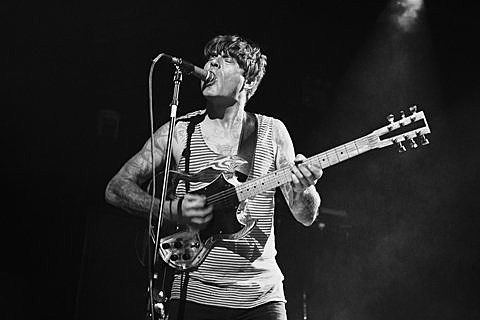 We just posted that Brigid Dawson is taking a break from Thee Oh Sees so she can do other stuff like her artwork. But who is in The Oh Sees now? Now living in Los Angeles, frontman John Dwyer has an all-new live touring lineup of the band and it's a trio, with Nick Murray on drums and Timothy Hellman on bass.

UPDATE (5/8): This is the line-up for this tour and should not be considered the new "official" lineup of the band.

We will miss Petey and Mike and Brigid! Also a bit surprised The Intelligence's Lars Finberg (who lives in LA too) isn't a part of the program. (He has been a touring member before.) Anyway, we're excited to see this slimmed-down Oh Sees when they play Brooklyn's McCarren Park on June 14 as part of Northside Fest. It's a free show, RSVP is still open for that and you can also get in with your Northside Badge (which are still available).