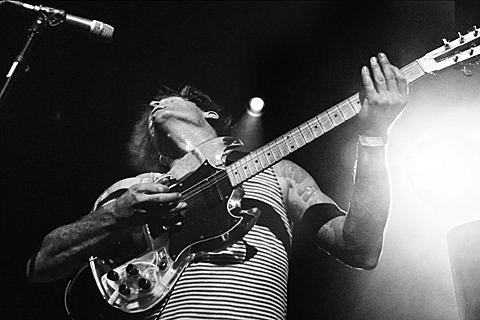 Well this is bummer news -- SF Weekly reports that San Francisco greats Thee Oh Sees are going on "indefinite hiatus" as frontman John Dywer is moving to Los Angeles, while singer Brigid Dawson is moving to Santa Cruz. Wednesday night, the band played The Great American Music Hall and Dwyer said onstage, ""This will be the last Oh Sees show for a long while, so dig in." Band manager Annie Southworth confirmed to the paper, "Will be a little hard to continue with all the different locales so who know what is going to happen... Cross fingers, we all are that it's not completely over."

This will mark the end of a very prolific period for the band. 2008's The Master's Bedroom is Worth Spending a Night In really got them noticed and and they've barely taken a breath since, endlessly touring, releasing albums, singles, EPs, flexis, splits at a dizzying rate. This year's Floating Coffin was one of their best, and Thee Oh Sees shows here in October found them at the height of their powers.

If this is the end, and we hope it's not, they went out with a bang. Check out video from that Great American Music Hall show below.