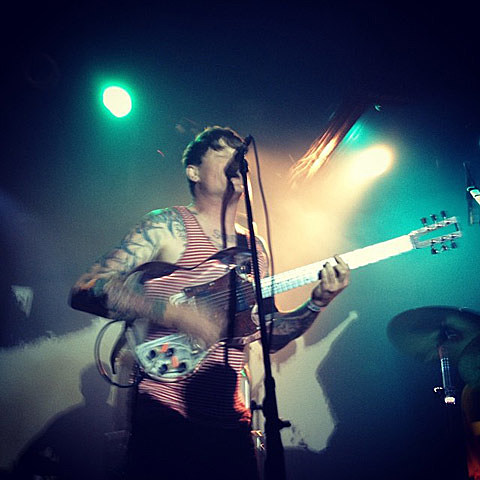 When we first received word that Thee Oh Sees had booked two back-to-back performances at the Church On York in Highland Park, we were shocked that such a wild band with so much vigorous crowd energy was about to play a very small and very hot venue. Needless to say, we were very excited to see how it would pan out. Unfortunately, The Church On York was shut down due to code and permit violations (according to the city). But the show must go on, and that's just what happened last night as Thee Oh Sees sold-out the Echoplex with a most glorious performance.

Thee Oh Sees absolutely tore down the house by its very structure as their music exploded throughout the Echoplex, infecting every audience member with a quick shake of the shoulders, nod of the head and even moshing. It was like a virus had been unleashed amongst a condensed crowd. - [Grimy Goods]

The new touring lineup of Thee Oh Sees made their live debut last month, first as part of the Deserted at the Pams festival in Twentynine Palms CA, then last week (5/29) at Echoplex in Los Angeles. You can watch video of the entire Echoplex show below.

Thee Oh Sees will be in NYC next week for a free outdoor show in McCarren Park as part of the 2014 Northside Festival. Australian psych-rockers King Gizzard & the Lizard Wizard and Minneapolis' great The Blind Shake open, making for a very solid show. You can still RSVP for that, or get in with your Northside badge which are still available to buy.