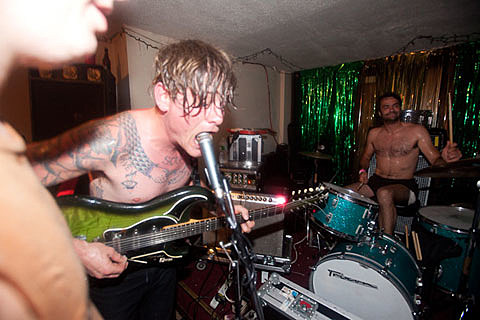 "Thee Oh Sees perch comfortably atop a vibrant Bay Area garage-rock scene. It's a spot they've earned for a number of reasons: seniority (the band has been bashing since 2005, and head Oh See John Dwyer fronted primal pounders the Coachwhips before that); an inhuman prolific streak (being an Oh Sees completist is like being a member of a fabulous record-of-the-month club); and the simple fact that the band is one of the best live acts on the West Coast, East Coast or anywhere in between, delivering a blur of hip-shaking, revved-up mayhem every time it's onstage." [Washington Post]

Like Ty Segall, fellow California bruise cruisers Thee Oh Sees, who are appearing at the return of Bruise Cruise in 2012 have added a NYC show to their 2011 summer tour. They play Brooklyn Bowl on June 18 as part of the Northside Festival. Tickets for the "Tell All Your Friends" showcase are on sale now, or you can try to use a Northside badge to get in.

And speaking of bands playing the Bruise Cruise, don't forget that Quintron and Miss Pussycat have cancelled their current tour (5/28 @ 285 Kent included).