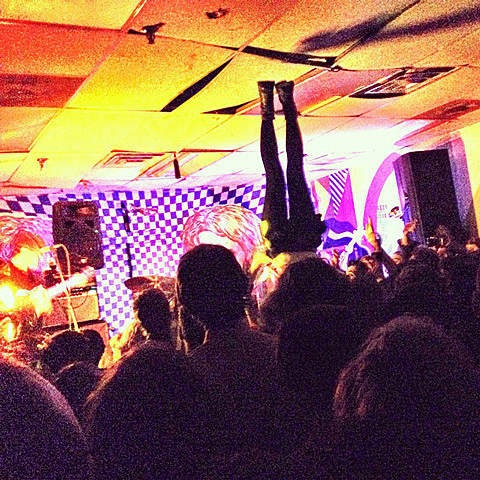 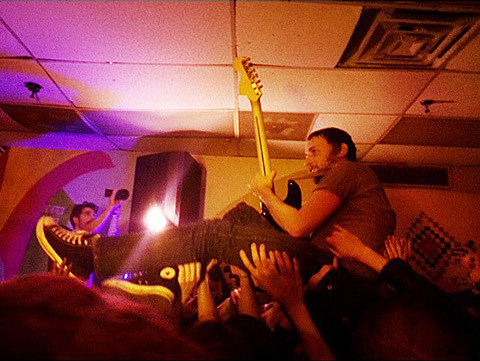 John Dwyer said Thee Oh Sees would be at Death by Audio for two nights and Thursday (11/20) was indeed night 2 for the DbA regulars. Their set seemed a little better last night than Wednesday, though neither show was missing any energy. While Petey, Brigid and Mike are missed, the new rhythm section (including White Fence's touring drummer) are not lacking in skill or drive, and Dwyer now plays a little keyboards as well which is a nice addition. Any chance to catch Dwyer in action is usually worth it. NYC has one more chance to catch Thee Oh Sees, tonight (11/21) at Warsaw (advance tickets sold out).

This was a little more of a cohesive bill than Wednesday, too. Nashville's Natural Child were another of the "top secret!" guests, who have also played DbA many many times over the years. The band's southern-fried rock is always a lot of fun and there were many folks in the audience shouting along to their raunchy 2009 single "Shame Walkin'." You can catch Natural Child tonight in NYC at Baby's All Right (tickets).

Also on the bill was Thee Oh Sees' tourmate Jack Name whose sound live is skuzzier and more vintage electronics than on record, veering into Iggy Pop The Idiot territory. With everyone but the guitarist seated, it didn't make for the most exciting set but they sounded good. They play with Thee Oh Sees at Warsaw, too, along with Kyp Malone's Ice Balloons (he'll be busy tonight as his slightly more known band TV on the Radio play too, at MHOW).

Skimask opened the show with a 5-song set that they played on the floor, so while we didn't see them, we did experience them and their punky noise and funny stage banter made for a good start to the night.

There are only two shows at Death by Audio left both are "Top Secret!" though they'll likely have clues for tonight's show up on their website later today. We've got a good guess as to who one of the openers is.

Video of Thee Oh Sees doing set-opener "The Dream" at DbA last night, plus a few more instagrams, below...