THEESatisfaction at Bowery Ballroom in 2011 (more by Toby Tenenbaum) 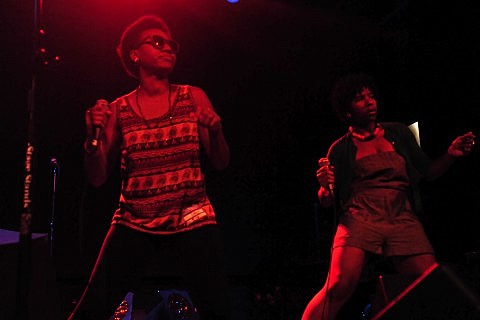 Frank Ocean may have put out the best contemporary R&B album of the year, but THEESatisfaction definitely have the weirdest. The Shabazz Palaces collaborators released their debut, awE naturalE, earlier this year via Sub Pop and having been playing shows in support of it, including some with Shabazz Palaces. THEESatisfaction gives the R&B formula a similar treatment to the one Shabazz gives hip hop, pulling from the appeal of the genre's golden age but blowing it out with futuristic ideas and touches of experimentalism. If you've yet to hear awE naturalE, you can stream the whole thing below.

The duo have announced more dates in support of the album for this year which brings them back to NYC on October 25 at Glasslands. Tickets for that show go on sale Friday (8/24) at 7 AM. Set your alarm?

A list of all currently known dates and the album stream are below.